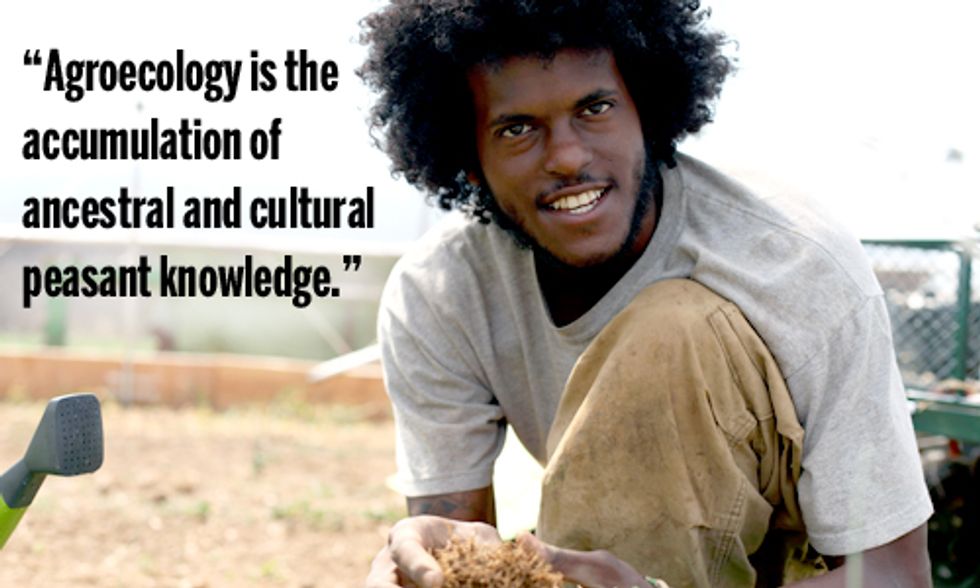 Agriculture is often at the center of debates, research and protests when it comes to environmental activism. On those stages agriculture is often cast as the "bad guy." And for good reason. The list of offenses is egregious: pollutant run-off into streams, significant deforestation to make room for endless fields of soybeans, fossil fuels emitted into the atmosphere contributing to climate change and pesticides ingested by farmworkers and consumers. I could go on! Even under the label of organic, industrial agriculture comes under fire for the use of heavy machines, intensive irrigation and weed control, which arguably leads to soil erosion especially when monocrops are involved.

There's a quiet revolution under way by peasants and farmers worldwide that will resonate with many of us. Photo credit: WhyHunger

But there's a quiet revolution under way by peasants and farmers worldwide that will resonate with many of us—consumers and advocates for a more sustainable food system as well as environmental activists. It's called agroecology and it has the potential to get loud.

Agroecology is a science and practice defined in the daily lives of millions worldwide. It represents both a form of agricultural production and a process for organizing and building community self-determination. Not to be confused with sustainable agriculture, regenerative agriculture or other environmentally-friendly farming practices, agroecology is a way of life and a pathway to end hunger, protect our natural environment and transform society. It's farming, feeding, restoring, preserving, protecting and democratizing, grounded in the accumulated (and still accumulating knowledge) of those relying on nature's resources to nourish their families and communities. And it begins with an intuitive understanding that ecology is about the interdependent relationships of natural organisms—including humans—to their local environment. Key to an agroecological approach is not just the production of food, but the production of knowledge.

But don't take my word for it. Listen to the voices of the practitioners of agroecology—the peasants, mainly women, who are leading the way in engaging their communities, as Janaina Stronzake from Brazil, says, “Always with participatory and local decisions about what, how and when to produce. Every place in the world must build its own agroecology."

WhyHunger's new publication Agroecology: Putting Food Sovereignty into Action is not a technical guide or a “how to" manual on production practices. Rather it shares the perspectives of members of rural communities around the world that are fomenting a quiet revolution from the soil to the community on behalf of Mother Earth.

Why You Should Buy Organic Food for You and Your Family