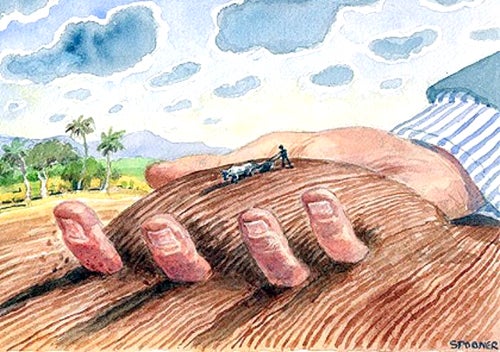 An estimated 70.2 million hectares of agricultural land worldwide have been sold or leased to foreign private and public investors since 2000, according to new research conducted by the Worldwatch Institute for its Vital Signs Online service. The bulk of these acquisitions, which are called “land grabs” by some observers, took place between 2008 and 2010, peaking in 2009. Although data for 2010 indicate that the amount of acquisitions dropped considerably after the 2009 peak, it still remains well above pre-2005 levels, writes Worldwatch author Cameron Scherer.

Although definitions vary, “land grab” here refers to the large-scale purchase of agricultural land by foreign investors. Thus, land leases or purchases among domestic actors are omitted. In April 2012, the Land Matrix Project, a global network of some 45 research and civil society organizations, released the largest database to date on these types of land deals, gathering data from 1,006 deals covering 70.2 million hectares around the world.

Africa has seen the greatest share of land involved in these acquisitions, with 34.3 million hectares sold or leased since 2000. East Africa accounts for the greatest investment, with 310 deals covering 16.8 million hectares. Increased investment in Africa’s agricultural land reflects a decade-long trend of strengthening economic relationships between Africa and the rest of the world, with foreign direct investment to the continent growing 259 percent between 2000 and 2010.

Asia and Latin America come in second and third for most heavily targeted regions, with 27.1 million and 6.6 million hectares of land deals, respectively.

Investor countries, in contrast, are spread more evenly around the globe. Of the 82 listed investor countries in the Land Matrix Project database, Brazil, India and China account for 16.5 million hectares, or around 24 percent of the total hectares sold or leased worldwide. When the East Asian nations of Indonesia, Malaysia and South Korea are included, this group of industrializing countries has been involved in 274 land deals covering 30.5 million hectares.

The U.S. and the United Kingdom account for a combined 6.4 million hectares of land deals. The oil-rich but arid Gulf states make up the final group of major land investors, with Saudi Arabia, the United Arab Emirates and Qatar responsible for 4.6 million hectares.

“In several cases—namely, South Africa, China, Brazil and India—there is an overlap between investor and target countries,” said Scherer. “Yet most of the data paint one of two pictures: First, there is a new ‘South-South’ regionalism, in which emerging economies invest in nearby, culturally affiliated countries. The other trend is one of wealthy (or increasingly wealthy) countries, many with little arable land, buying up land in low-income nations—especially those that have been particularly vulnerable to the financial and food crises of recent years.”

The food crisis of 2007–08 helped spark the dramatic uptick in foreign acquisitions in 2009, as investors rushed to capitalize on the rising prices of staple crops. But food prices are not solely responsible for the land-grab trend. As fuel consumption and oil prices continue to rise, the demand for land on which to grow feedstocks for biofuels will likely rise too, increasing the pressure on limited cropland.

The implications of the recent surge in foreign land acquisitions are still unclear. In many cases, the deals displace local farmers who already occupy and farm the land, but who frequently lack formal land rights or access to legal institutions to defend these rights. The land grabs also often result in the use of industrial agriculture and other practices that can bring serious ecological and other impacts to these regions. In the absence of clear regulations, robust enforcement mechanisms, government transparency and channels for civil society participation, further investments in land may benefit a group of increasingly wealthy investors at the expense of those living in the targeted land areas.