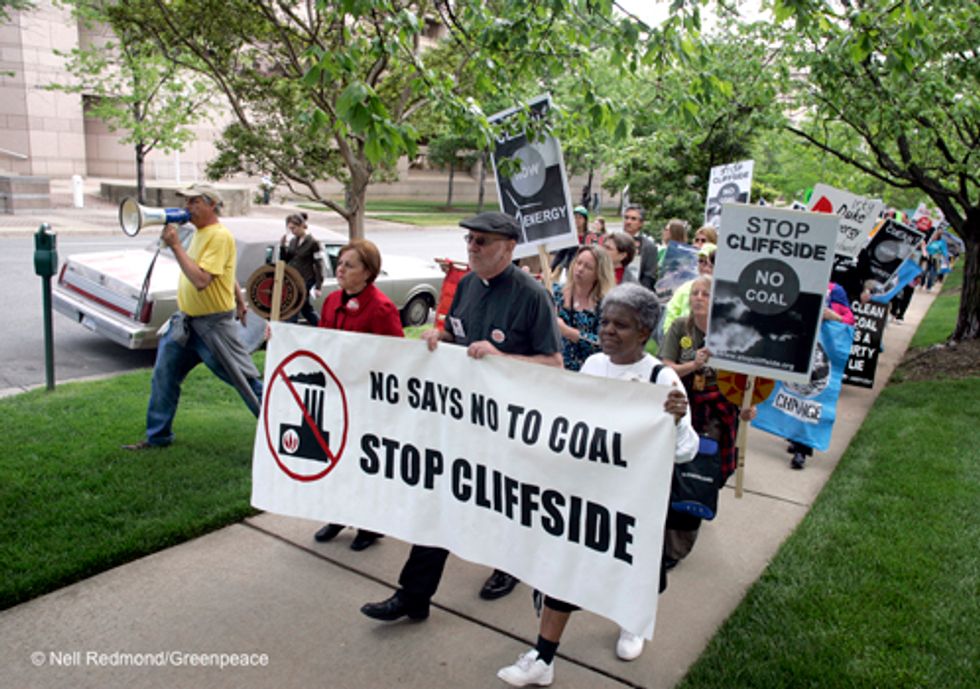 The groups reached the settlement in an administrative challenge to the state-issued air pollution permit for construction and operation of a new coal-fired unit at Duke Energy’s Cliffside power plant near Shelby, N.C. The Southern Environmental Law Center negotiated the settlement on behalf of Environmental Defense Fund, National Parks Conservation Association, Sierra Club and Southern Alliance for Clean Energy.

Under the settlement terms, Duke Energy will retire old coal-fired units that lack modern pollution control technology, totaling about 1667 megawatts or more than twice the capacity of the new unit at the Cliffside facility. Duke had previously included these coal-plant retirements in its non-binding, long-range plan submitted each year to the state utilities commission. The settlement agreement makes the planned retirements enforceable, thereby locking in reductions in air and water pollution that harms the health of children and families in the Carolinas.

As a result of advocacy by the conservation groups and other clean energy advocates, the new Cliffside unit will operate under the most stringent acid gas controls in the U.S., with a 99.9 percent reduction in such pollution. Acid gases, such as sulfur dioxide and hydrochloric acid, from coal-fired power plants can cause eye, nose, and respiratory tract irritation and inflammation, chest pain, coughing, nausea, impaired lung function, asthma attacks, and chronic bronchitis.

The settlement also tightens a permit provision that Duke Energy must demonstrate best practices to decrease toxic air pollution emitted during malfunction, shut down and start up situations.

Many old power plants operate today without modern pollution controls that are overdue since the Clean Air Act Amendments of 1990. More than 400 coal- and oil-fired power plants nationwide release in excess of 386,000 tons of hazardous air pollutants into the atmosphere each year that are linked to cancer, heart disease, birth defects, asthma attacks and even premature death.

“This settlement phases out some of the oldest, dirtiest, and most inefficient coal plants in the Carolinas,” said John Suttles, a senior attorney at the Southern Environmental Law Center who represented the groups in court. “In addition to protecting people’s health and saving lives, it also will save ratepayers’ money by paving the way for a more efficient and sustainable energy future.”

“This settlement ends another chapter in the history of polluting coal generation that jeopardizes our health, air and water," said Michael Regan, director of energy efficiency for Environmental Defense Fund. "In the future, energy conservation and new technologies will provide North Carolina with reliable energy while protecting our families and economy.”

“The air quality improvements that will result from this settlement will provide present and future generations with substantially cleaner air in the region,” said Don Barger, National Parks Conservation Association's Southeast regional director. “The health of our people and parks, including Great Smoky Mountains National Park in particular, will long bear witness to the benefits realized from transitioning away from coal.”

“North Carolina has long been a clean air leader, and today's settlement is another important step forward for the Tarheel State. This settlement is critical for the health of North Carolina's families. Coal-fired electricity is the primary source of toxic mercury pollution and is a leading trigger of asthma attacks. These retirements will allow North Carolina to move beyond coal, and focus on clean energy solutions like solar and offshore wind," said Mary Anne Hitt, director of Sierra Club's Beyond Coal campaign.

“We are pleased to finally have a settlement agreement with Duke Energy to offset the enormous amount of carbon dioxide that the Cliffside coal plant will emit over its lifespan,” stated Stephen Smith, executive director of Southern Alliance for Clean Energy. “Duke’s old coal plants need to come offline to reduce the company's contribution to climate change while making room for cleaner, more sustainable energy sources.”

Since 1919, the nonpartisan, non-profit National Parks Conservation Association has been the leading voice of the American people in protecting and enhancing our National Park System. NPCA, its 340,000 members, and partners work together to protect the park system and preserve our nation’s natural, historical, and cultural heritage for our children and grandchildren.

Sierra Club is the nation’s largest grassroots environmental organization with over 17,000 members in North Carolina and more than 1.4 million members and supporters nationwide. Since 2002, Sierra Club’s Beyond Coal campaign has successfully stopped 161 new coal plant proposals from moving forward, and is working to move our nation beyond coal to a clean, safe energy economy.

Southern Alliance for Clean Energy is a nonprofit organization that promotes responsible energy choices that create global warming solutions and ensure clean, safe, and healthy communities throughout the Southeast.

The Southern Environmental Law Center is a regional nonprofit using the power of the law to protect the health and environment of the Southeast (Virginia, Tennessee, North and South Carolina, Georgia, and Alabama). Founded in 1986, SELC's team of more than 40 legal and policy experts represent more than 100 partner groups on issues of climate change and energy, air and water quality, forests, the coast and wetlands, transportation, and land use.