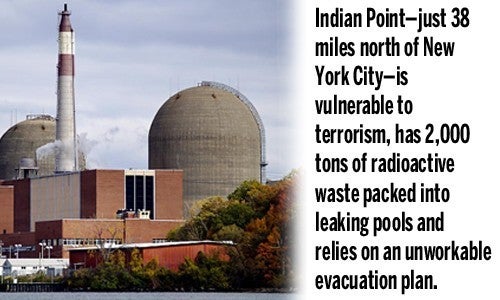 We must face facts regarding the Indian Point nuclear plant. It’s infrastructure is aging, its safety is dubious and most everyone knows it. What many people don’t know is that it can be replaced at little cost to ratepayers—and energy technologies taking its place would create new economic opportunities for New York.

Indian Point—just 38 miles north of New York City—is vulnerable to terrorism, has 2,000 tons of radioactive waste packed into leaking pools and relies on an unworkable evacuation plan. While some argue that transformer accidents—such as the one that occurred last month—can happen at any power facility, they happen with astonishing frequency at Indian Point. Its age is problematic: You wouldn’t rely on a 40-year-old appliance, why extend this trust to a nuclear plant? Moreover, the Nuclear Regulatory Commission (NRC) says Indian Point 3 has the highest risk of earthquake damage of all the nation’s reactors. About 20 million people live within 50 miles of Indian Point. If a catastrophic accident occurred, the consequences would be unimaginable. 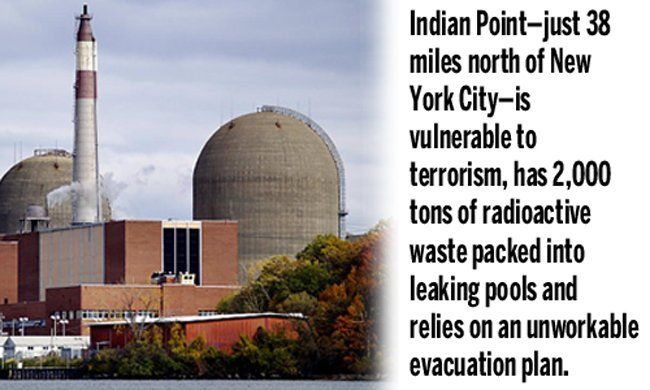 Entergy and nuclear-industry groups make spurious claims that skyrocketing energy costs would result from Indian Point’s closure. Actually, it can be retired without undermining the state’s electric grid. Planning is under way for better efficiencies and cleaner energy sources. The cost to ratepayers will be minimal when compared to the risks, and homeowners could actually see savings in a few years—especially if they make their homes more energy efficient.

Right now, three efficient transmission projects could potentially save as much as 600 megawatts, and combining hydropower, wind, solar and other renewables could eventually make up the difference.

Closing Indian Point was pronounced doable by New York state in 2013, and it would bring economic opportunities and create jobs. SolarCity’s manufacturing plans in Buffalo are just one signal of the potential.

And then there’s the slaughter of Hudson River fish to consider: Indian Point kills more than a billion fish eggs and larvae each year through its cooling systems. The radiological contamination it leaks violates the Clean Water Act and has devastating effects on the river’s ecology. Closing it would be a step toward restoration of species in decline.

It’s no longer a question of whether Indian Point can be shut down, it certainly can. This aging nuclear power plant in a densely populated and ecologically fragile region is inherently problematic, threatening river life and human life. It no longer has a place in New York’s energy landscape.We must close it before it closes us.