After Sailing 3,000 Miles ... It's Official Microplastics Are Everywhere 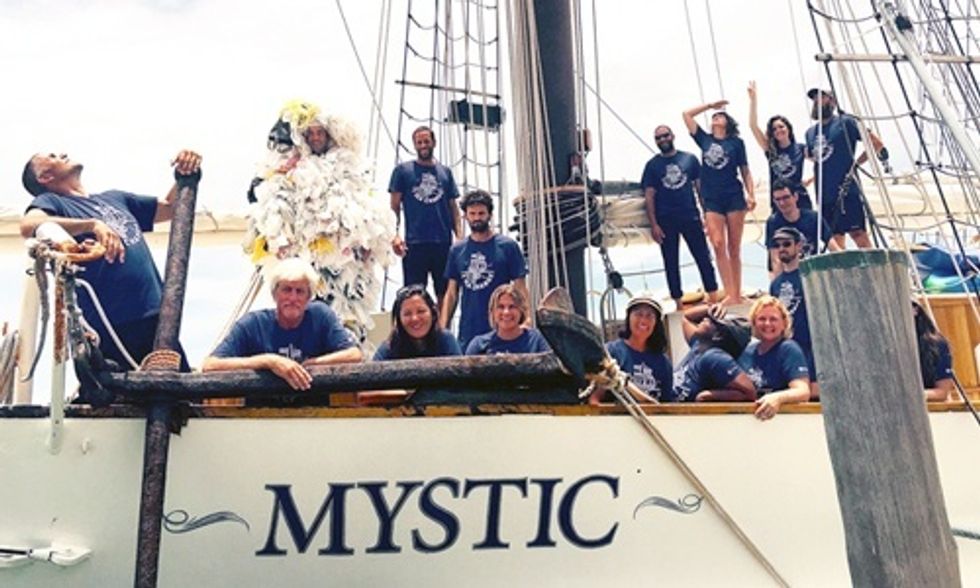 The 5 Gyres Institute sailed 3,000 miles in June—from Miami to the Bahamas to Bermuda and ending in New York City—sampling the sea surface along the entire voyage for plastic pollution. Sadly, our research once again demonstrates how prolific and widespread plastic is in our oceans. We found microplastics, pieces smaller than a grain of rice, dominating each of the 38 samples taken during the three week-expedition through the North Atlantic Subtropical Gyre, a series of clockwise rotating currents between the U.S. and Europe.

What we found in our samples, confirms our understanding that plastics quickly shred in the open sea due to UV sunlight. We have dubbed this abundance of fragments, which are being consumed by sea life as well as slowly settling to the seafloor, as plastic smog. This plastic smog that overwhelmingly pollutes our oceans has gone global, emanating from our densely populated coastlines.

Consider the smog that hovers in the air above our major cities. It is composed of fine particles of carbon swirled by atmospheric currents and sometimes adrift for hundreds of miles before settling to the ground. The plastic smog in our oceans is a particulate of hydrocarbons swirled by ocean currents and drifting for thousands of miles before possibly settling to the seafloor. If you can imagine a plastic smog in our oceans, then you can imagine our cities are the horizontal smokestacks pumping plastic into the ocean.

On June 23, the 5-Gyres’ ship the Mystic, a 172 foot three-masted schooner, sailed into the New York Harbor. Our surface nets dragged up and down the Hudson River and the bay, and we were shocked by what we found.

Our last sample collected south of Manhattan was the most polluted of them all, with nearly 500 bits of plastic filling our tiny net in just one hour. New York City is pumping millions of particles of plastic into the Atlantic Ocean every day. The objects found included cigar tips, tampon applicators, condoms, straws, fragments of plastic bags, preproduction plastic pellets and hundreds of unidentifiable plastic fragments. New York City is feeding the plastic smog.

A small sampling of plastic found while dragging

The situation may seem hopeless, but there is tremendous ambition in the resilience of environmental organizations throughout the state of New York that are working to reduce plastic waste entering New York waterways. More than 40 organizations from every corner of the state are working together to stem the tide of plastic into New York’s waters.

This coalition worked tirelessly throughout the 2015 New York state legislative session to pass a ban on plastic microbeads in personal care products. Tiny plastic microbeads in products such as facial scrubs and toothpastes (yes, some toothpastes leave plastic particles between your teeth and in our gums) are designed to be washed down the drain, where they often escape sewage treatment and pollute our waters. While the bill passed the Assembly and enjoyed overwhelming support in the Senate, it fell victim to Albany dysfunction, and did not pass into law this year. Fortunately, our neighbors in Connecticut successfully passed a ban on microbeads this year and we are poised to win the fight in New York next year.

Therefore, it is essential that residents of New York remain vigilant and aware of our plastic consumption. The reduction of plastic bags, foamed polystyrene and microbeads in personal care products will collectively have a meaningful and positive effect on the quality of the waters surrounding New York and beyond. Individual, voluntary efforts are a great start. However, legislation is undeniably needed to solve our plastic problem once and for all. All of us, including the industries that make plastic products, are responsible for the problem, and through smart and fair legislation we can be the solution.