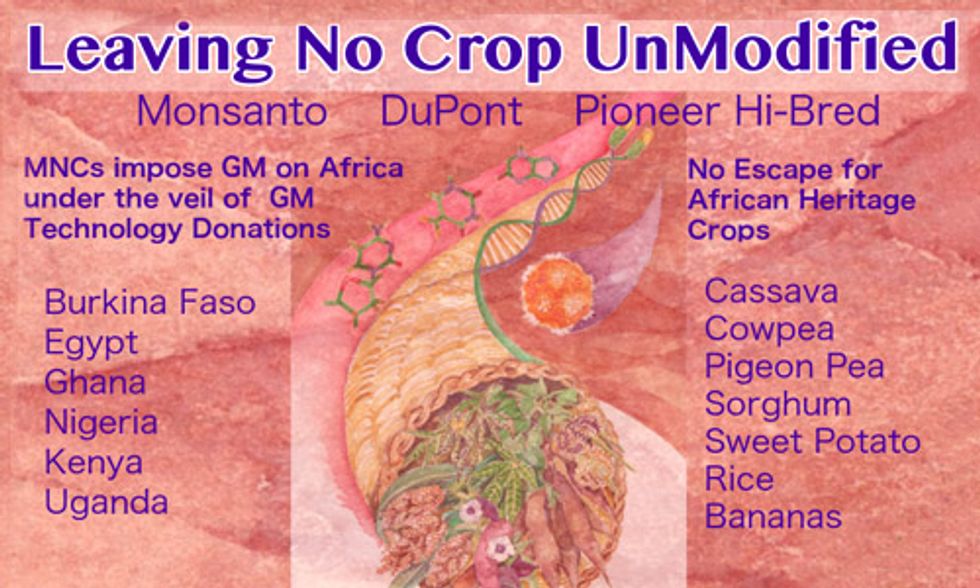 A new report from the African Centre for Biodiversity, a nonprofit that aims to protect the continent's biodiversity and food production system, accuses the Bill & Melinda Gates Foundation, the United States Agency for International Development (USAID) and GMO companies including Monsanto of introducing GMO technology in Africa "under the guise of philanthropy."

The report, For your own good!, also warns that GMO companies are currently conducting R&D on the genetic modification of staple African crops such as cassava, sorghum, sweet potato, pigeon pea, cowpea, banana and rice. The report says that the key countries "targeted" include, Burkina Faso, Egypt, Ghana, Nigeria, Kenya, Uganda and Malawi.

According to a press release of the report, several multi-national companies including Monsanto, Dupont and Pioneer Hi-bred have donated various patented GMO technology royalty-free to experimental programs led by government-employed African scientists. The main organizations carrying out the projects include the African Agriculture Technology Foundation and the Agricultural Biotechnology Support Program and the Program for Biosafety Systems. The on-going trials are focused on drought and salt tolerance, nitrogen use efficiency, resistance to tropical pests and diseases and nutritional enhancement, or biofortification, the release says.

“This indicates that the GM industry, under the veil of technology donations and public financing, is effectively managing to make further inroads into imposing GM on the African continent," Mariam Mayet, director of the African Centre for Biodiversity, said in a statement. "By focusing the research on traits meant to ‘benefit’ farmers and malnourished populations, through inter alia, biofortification, the industry is intent on giving a humanitarian face to the real involvement, vested interests and expanding influence of these [multinational corporations] in African agriculture.”

“There is no such thing as a free lunch for African farmers," Mayet said. "And to add insult to injury, these farmers will be precluded from saving any farm-saved propagating material. In this way, they will be expected to give away their age old farmers’ rights to freely reuse, exchange and sell seed and propagating materials in their farming and seed systems.”

Recalling the failure of Golden Rice and Monsanto’s GMO sweet potato research in Kenya in 2003, the report argues that the GMO projects are diverting both financial and human resources, policies and practices away from implementing the real solutions which can be found within the diversity of natural foods and farming.

“The real solutions to address vitamin and mineral deficiencies can be found in ecological farming systems, and traditional kitchen and home gardens, which can better contribute to healthy and diverse diets and empower people to access and produce their own healthy and varied food," Zakiyya Ismail, a consumer campaigner with the African Centre for Biodiversity, said in a statement.

It's no secret that the Gates Foundation and multinational seed makers are pushing Africa to accept GMOs but does Africa want them?

Many in the continent would say no. Last month, five million Nigerians urged their government to reject Monsanto's attempts to introduce GMO cotton and maize into the country’s food and farming systems out of potential human health and environmental risks. Burkina Faso's cotton association is also currently seeking $83.91 million from Monsanto after saying GMO cotton led to a drop in quality.

"We went from 39.2 billion (CFA francs) in losses to 49.3 billion in just one harvest. If we continue like that we'll just dig the hole deeper," Wilfried Yameogo, managing director of SOFITEX, one of the cotton companies belonging to the Cotton Association of Burkina told Reuters.

"How do you change the slope in the curve of food security? Because as many parts of the world don’t have enough to eat, and Africa this year is heading into another famine," Grant said. "We see the front end of that right now."

For instance, in the face of a food crisis and a devastating drought, South Africa is planning to relax its rigid laws over GMO crops and boost imports of its staple food, maize, from the U.S. and Mexico.

Monsanto's Water Efficient Maize for Africa (WEMA) aims to develop a variety of drought-tolerant maize seeds in Sub-Saharan Africa. The project is a collaboration between the African Agricultural Technology Foundation and is funded by the Bill & Melinda Gates Foundation, Howard G. Buffett Foundation and USAID.

“The long-term growth has to be looked at as a business opportunity,” WEMA project director Mark Edge told Bloomberg Businessweek. “The short-term challenge is creating the market and understanding what investments can do that.”

Edge added that the project involves hybrid seeds rather than the genetically modified varieties Monsanto produces, "which are controversial on the continent." (Read here to learn the difference between hybrids and GMOs but depending on how you look at it, they might as well be two sides of the same coin).

According to Bloomberg Businessweek, a number of other Big Ag companies have also set sights on Africa:

From the report, For your own good!