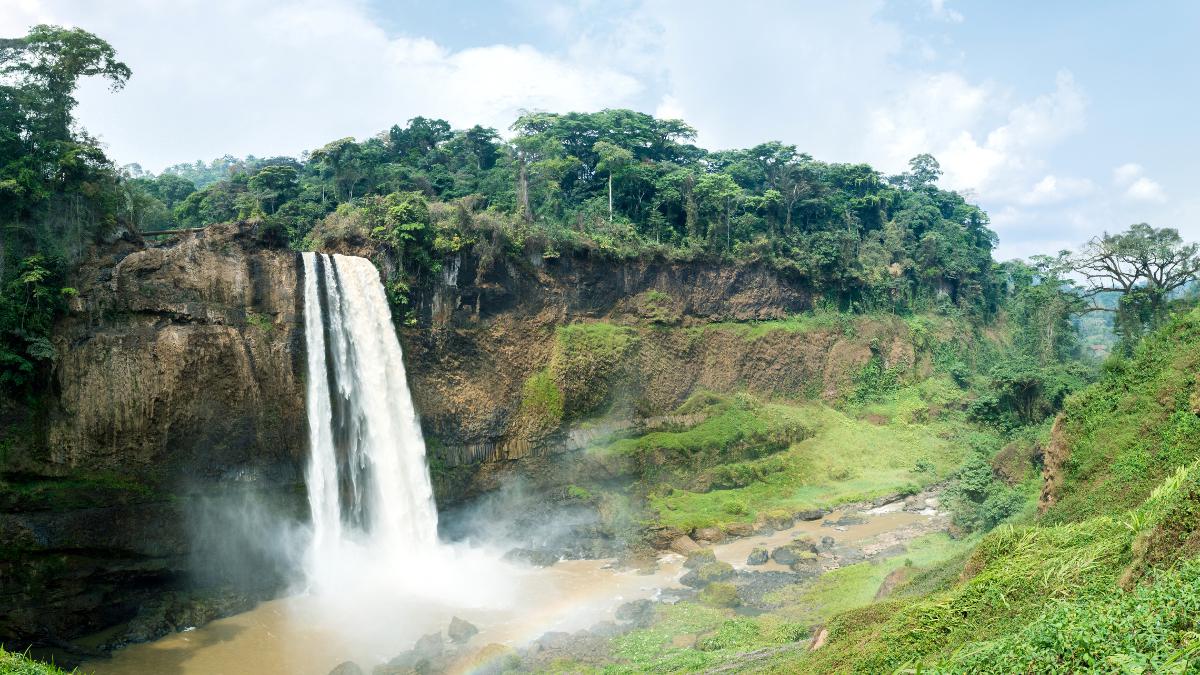 Ekom Waterfall in a rainforest in Cameroon, Africa. antoineede / iStock / Getty Images Plus

Aptly called, “Earth’s lungs,” the planet’s two largest swaths of rainforest, in Amazonia and Africa, suck up 15 percent of all carbon dioxide emissions produced by humans. These ecosystems are essential for carbon sequestration and therefore curbing climate change, and while the Amazon rainforest has been the subject of mountains of research, scientists are just now beginning to understand how rainforests in Central and Western Africa respond to small changes in climate — and it’s good news.

“This is the first on-the-ground evidence of what happens when you heat and drought an intact African rainforest,” Leeds’ School of Geography professor and senior author of the new research, Simon Lewis, said in a press release. “What we found surprised me.”

Despite more severe droughts and hotter weather, 100 plots of intact tropical rainforests spread across the Democratic Republic of the Congo, Gabon, Cameroon, Ghana, Liberia and the Republic of the Congo still absorbed a significant amount of Earth-warming CO2 compared to non-drought years.

To test this, the team used the 2015-2016 El Niño climate pattern as a model for what conditions may look like consistently in the near future. Exasperated by climate change, the temporary cycle brought a temperature increase of nearly 1 degree Celsius above the 1980-2010 average and the most severe drought on record.

According to lead author Amy Bennett, a professor at the Leeds’ School of Geography, the extreme weather conditions brought by El Niño in 2015 and 2016 reduced the amount of carbon dioxide the forest pulled from the atmosphere by about 36 percent. However, the ecosystems continued to function as a huge carbon sink. Despite the crippling conditions, the plots indicated that rainforests in Central and Western Africa still absorbed 1.1 billion tons of carbon dioxide per year — three times the amount emitted by the United Kingdom in 2019.

“African tropical forests play an important role in the global carbon cycle, absorbing 1.7 billion tonnes of carbon dioxide from the atmosphere each year since the turn of the last century. To discover that they will be able to tolerate the predicted conditions of the near future is an unusual source of optimism in climate change science,” Bennett said in a press release.

In particular, larger trees were mostly unaffected, which the researchers speculated was due to the fact that larger root systems have more stable access to water. Smaller tree species, however, had less growth and higher death rates during drought years.

In contrast, research published in Nature in 2018 found that the Amazon rainforest’s canopy shrunk during spells of El Niño drought. The Amazon rainforest, the largest of its kind in the world, is expected to collapse by 2046 and scientists believe it’s already on the brink of emitting more carbon dioxide than it absorbs.

Taken together, research on Earth’s lungs emphasizes the importance of keeping rainforests intact while drastically reducing carbon emissions. Central Africa houses the world’s second-largest tropical rainforest. Like all rainforests, the 240 million hectares of forest are threatened by logging, mining, expanding agriculture and wildfires.

“The resistance of intact African tropical forests to a bit more heat and drought than they have experienced in the past is welcome news, but we still need to cut carbon dioxide emissions fast, as our forests will probably only resist limited further rises in air temperature,” said Bonaventure Sonké, a professor at University of Yaoundé in Cameroon, who co-authored the new study.

Gabon recently received $150 million in international funds from the United Nations Central African Forest Initiative to preserve its rainforests, 10 percent of which are already protected. Cameroon, its neighbor to the north, committed in 2017 to restoring more than 12 million hectares of degraded land by 2030, the International Union for Conservation of Nature reported. But on its own, preserving rainforests will not be enough to prevent the most catastrophic effects of climate change. The authors stress that humans also need to commit to emitting fewer greenhouse gases.

“Our results provide a further incentive to keep global temperature increases to 1.5 degrees Celsius, as outlined in the Paris Agreement, as these forests look to be able to withstand limited increases in temperature and drought,” Sonké said in a press release.

Kaitlin Sullivan covers the environment, science and health beats. Her work has appeared in NBC News, Popular Science, NPR, VICE and Inverse, among others. Before becoming a journalist, she worked on a farm in Western Colorado, at a hostel in Brazil and as an editor for the American Alpine Club. She grew up in Minnesota, which is probably why she’s so obsessed with water, and has a master’s degree in health and science reporting from CUNY. When she isn’t reporting, you’ll probably find her outside hiking, rock climbing, sailing, camping, growing food or petting someone’s dog. Follow her on Twitter: @kaitsulliva