Africa Has a Troubling Shortage of Ventilators, Masks and Soap 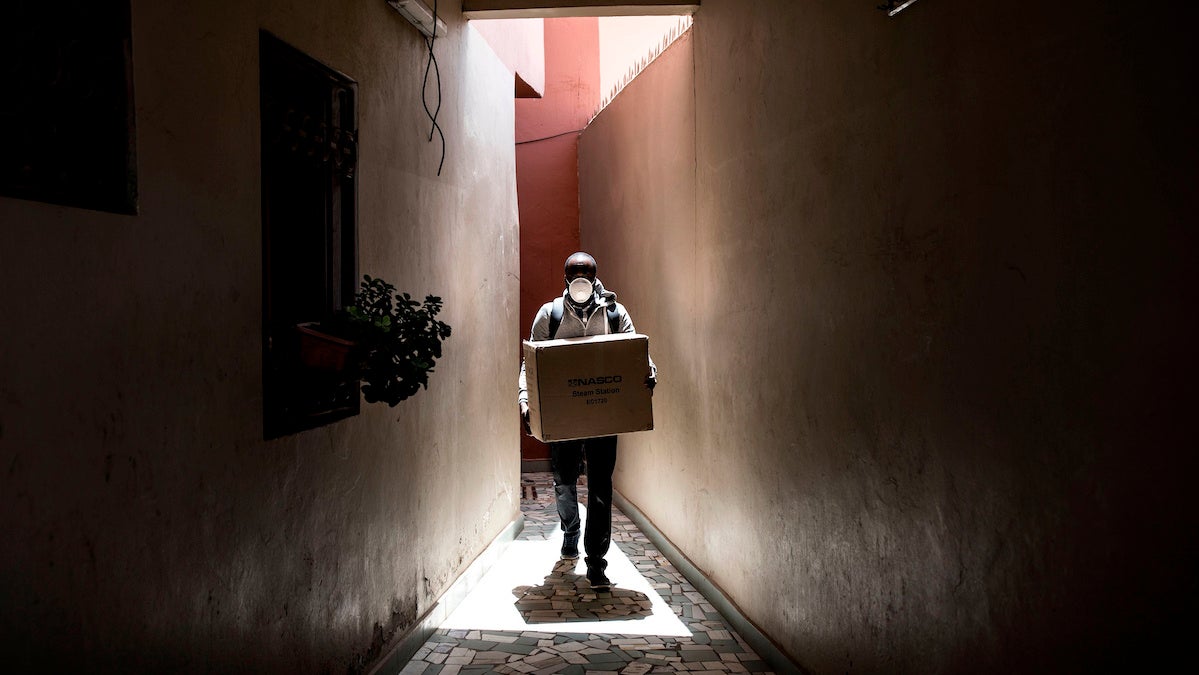 A worker with the local collective SN3D - COVID19 carries a box of protection masks, made from their 3D printing machine to be delivered to emergency workers on the frontline of the COVID-19 coronavirus outbreak in Dakar, Senegal on April 16, 2020. JOHN WESSELS / AFP via Getty Images

The glaring lack of adequate medical resources is becoming increasingly pronounced as developing nations try to prepare for a COVID-19 outbreak.

In Africa, for example, there are fewer than 2,000 working ventilators in public hospitals across 41 African countries, the World Health Organization says, compared with more than 170,000 in the U.S., as The New York Times reported.

Ten countries in Africa have none at all.

Somalia’s Health Ministry has none. The Central African Republic has three. South Sudan has four, which is one fewer than the number of vice presidents it has. Liberia has five. Nigeria, with a population of over 200 million, has fewer than 100, as The Washington Post reported.

The paltry number of ventilators across the continent means that patients who appear at hospitals with the most severe acute respiratory symptoms from the novel coronavirus have little chance of surviving. While the number of ventilators is expected to increase as donations trickle in, few doctors across the continent have had the extensive training necessary to use them. Also, the ventilators usually require an anesthesiologist to intubate patients, or at least supervise the process, but anesthesiologists are scarce in Africa, according to The Washington Post.

The shortage of ventilators, training and specialists required to make them functional is only part of the massive shortage in resources that poorer countries face during the global pandemic. Health officials have also warned about a dire shortage of oxygen and masks. Even soap and water are in short supply.

According to the United Nations, only 15 percent of sub-Saharan Africans had access to basic hand-washing facilities in 2015. In Liberia, UN numbers showed that in 2017, 97 percent of homes did not have access to soap and clean water, according to The New York Times.

“The things that people need are simple things,” said Kalipso Chalkidou, the director of global health policy at the Center for Global Development, a research group, as The New York Times reported. “Not high-tech things.”

As of Saturday, there were more than 21,000 confirmed coronavirus cases and 1,000 deaths across the continent. The World Health Organization said that the virus appears to be spreading away from Africa’s capital cities. The UN Economic Commission for Africa warned that 300,000 could die and called for a 0 billion safety net for the continent, including halting external debt payments, as the BBC reported.

“Anywhere between 300,000 and 3.3 million African people could lose their lives as a direct result of COVID-19, depending on the intervention measures taken to stop the spread,” the United Nations Economic Commission for Africa said in a report released Friday.

The problem, according to the UN agency, rests partly with the layout and infrastructure of some of Africa’s biggest cities, where the majority of the urban population lives in overcrowded neighborhoods without reliable access to hand-washing facilities, as NPR reported.

“We are now failing. Let me use that word deliberately,” said Mahad Hassan, one of Somalia’s few epidemiologists and a member of the government’s coronavirus task force, as The Washington Post reported. “At our main treatment center, almost nothing is there. Last time I visited, beds, only beds. No oxygen, no ventilators.”

Liberia’s minister of information explained to The New York Times that attempts to procure medical equipment run into problems like wealthier countries hoarding supplies, bidding against other governments, and price gouging by suppliers.

“We keep fighting with our neighbors and the big countries. Even having a contract is not a guarantee we’re going to get a supply,” Eugene Nagbe, the minister of information said. One vendor, after entering a contract, turned around and raised the price from the agreed-upon ,000 per ventilator to ,000, he added, as The New York Times reported.