The longest aerial bike path in the world opened late January for a trial run in the Xiamen province of China. The concept for this path was designed about eight years ago by middle school students in the annual Xiamen City Youth Science and Technology Innovation Competition.

The aerial bike path offers an alternative travel option in the city to reduce traffic and air pollution. It is undergoing a month-long trial in efforts “to promote green transport,” Xinhua reported.

The path is nearly five miles long and runs below the city’s Bus Rapid Transit (BRT) lanes. It offers 11 exits to subway and bus stations. Bikes can be rented and returned at various locations throughout the city.

The path can accommodate more than 2,000 bikes per hour and has a maximum speed limit of 15 miles per hour. Gates at the entrance to the path will automatically close when it’s at capacity, according to Co.Exist.

The original design, called the “Xiamen BRT Air Bike Road Concept,” was created by students from a Xiamen University-affiliated science and technology school. One of the student designers, Li Yunpeng, is pictured below left. 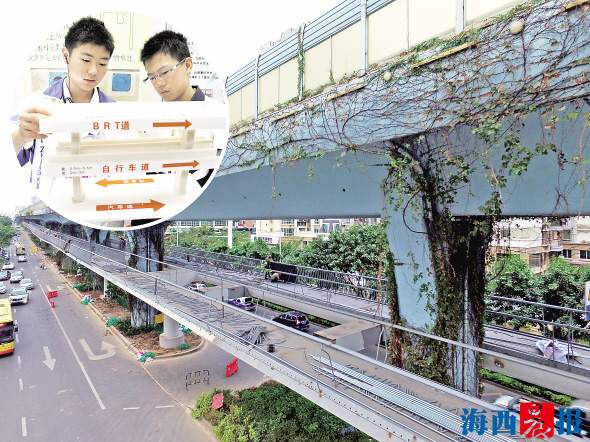 The path’s highest section is 16 feet off the ground, a measurement which mimics the original design. The students also suggested that the paths link to public transit hubs.

Early reviews of the path are positive. “It’s nice to ride a bicycle under the blue sky in the sunshine,” local resident Wu Xueying told Xinhua. He also commented that the guardrail helped him to feel safe.

Another resident said his work commute took the same amount of time whether he drove a car or biked on the aerial path, Xinhua reported.