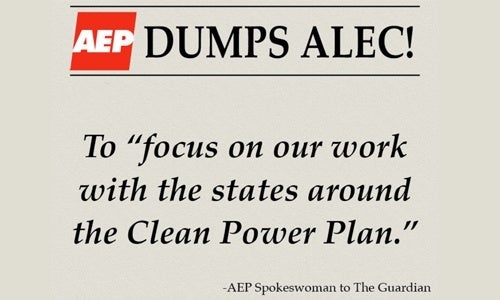 It appears that nearly everybody wants to disassociate itself from the American Legislative Exchange Council (ALEC), a conservative lobbying group that fights climate change policies. Its latest departure? American Electric Power (AEP), one of the nation’s largest utilities. If that wasn’t bad enough for ALEC, AEP said in it’s announcement it will be shifting its focus to working with states to comply with the Obama Administration’s landmark climate rule, the Clean Power Plan.

“AEP will not be renewing its ALEC membership in 2016,” AEP spokeswoman Melissa McHenry told The Guardian. “We reviewed our memberships and decided to reallocate resources to other areas of focus including working directly with the states and other stakeholder groups on issues like the Clean Power Plan.”

The power company said that “there are a variety of reasons for the decision,” but at least part of the decision stems from the lobbying group’s controversial stance on climate change. “We have long been involved in the reduction of greenhouse gas emissions,” AEP said.

While AEP was originally critical of the U.S. Environmental Protection Agency’s (EPA) proposed Clean Power Plan, a spokeswoman told The Guardian that “AEP supports the EPA’s amended plan and the expansion of renewables in general.”

At least six other utilities in the U.S. have dumped ALEC, and the Center for Media and Democracy said AEP is now the 107th company to have withdrawn funding from ALEC since it launched ALEC Exposed in 2011.

“It’s time for other major companies like UPS, State Farm and Pfizer to immediately follow suit and demonstrate their own corporate responsibility. ALEC is determined to thwart or eliminate essential environmental safeguards that protect clean air, clean water and our climate,” said Melinda Pierce, legislative director at the Sierra Club.

Even two oil giants, BP and Shell, told ALEC they would not be renewing their membership next year, with Shell specifically saying ALEC’s stance on climate change was “inconsistent” with its own. And the lobbying group is not just controversial for its stance on climate change. Amazon, Coca-Cola, McDonald’s, Facebook and Google “all left the organization over its stance on gun control in the wake of the 2012 killing of teenager Trayvon Martin,” The Guardian reported.

“Corporations are embarrassed by the scientific ignorance that ALEC actively peddles to policymakers,” said Gibson. “While some companies are starting to see the light, stubborn utilities like Duke Energy and Dominion Resources still pay ALEC to advance an anti-science agenda that props up dirty fossil fuels.”

ALEC firmly denies that it denies climate change, going so far as threatening to sue Common Cause and the League of Conservation Voters for claiming the organization denies that the planet is warming.

But in its official stance on climate change, ALEC argues there is still a debate, despite the overwhelming consensus among the scientific community about the impacts of climate change. “Climate change is a historical phenomenon and the debate will continue on the significance of natural and anthropogenic contributions,” ALEC’s website declares.

The group goes even further by saying on its website:

Unilateral efforts by the United States or regions within the United States will not significantly decrease carbon emissions globally, and international efforts to decrease emissions have proven politically infeasible and unenforceable. Policymakers in most cases are not willing to inflict economic harm on their citizens with no real benefit. ALEC discourages impractical visionary goals that ignore economic reality, and that will not be met without serious consequences for worldwide standard of living.

AEP, for its part, appears to want to transition away from dirtier energy sources such as coal and gas and towards renewables such as wind and solar. The Ohio-based company is the sixth largest utility in the country, based on market value, with 5.4 million customers in 11 states. The company “insists it is on track to reduce its emissions by 25 percent by 2017, based on 2005 levels,” The Guardian reported. And its coal use has dropped by a quarter in the last decade, while renewables now make up 11 percent of its energy supply.