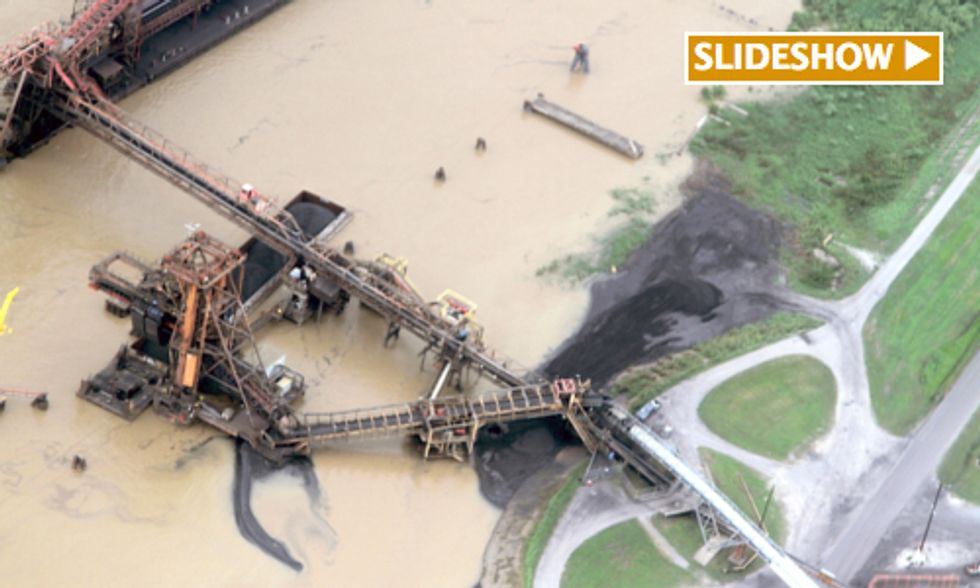 The imagery shows plumes of coal-polluted water spreading into the Mississippi River from the United Bulk terminal. The terminal, owned by United Bulk Terminals Davant LLC, has operated for more than four decades, shipping millions of tons of coal and petcoke every year to overseas markets.

“The coal and petcoke sit in huge, open piles along the river,” said Warren Lawrence, who lives in the neighboring community of Myrtle Grove. “So when there’s rain and wind, it just blows right into the river and the wetlands. The natural environment is the reason people love this area, and the coal is destroying it.”

The suit contends that United Bulk has illegally discharged coal and petcoke into the river every day that it has operated for at least five years. It points out that coal and petcoke—an oil-refining byproduct with high levels of arsenic, mercury and other toxins hazardous to human health and aquatic life—have been discharged into the river in enough quantities to produce visible spills on a regular basis. The suit also cites the U.S. Environmental Protection Agency’s determination that stormwater runoff from coal piles “can flush heavy metals from the coal, such as arsenic and lead, into nearby bodies of water.”

LEAN Executive Director Marylee Orr said that conservation groups and community residents hope that United Bulk will adopt a more environmentally responsible approach. “We’re hopeful that we’ll be able to work with the company to clean up the facility and make it safer for workers, communities and the environment.”

Today’s legal challenge follows the suit filed last fall by Clean Gulf Commerce Coalition organization against Louisiana’s Department of Natural Resources for its illegal approval of a coastal use permit for the proposed RAM coal export terminal in Myrtle Grove in Plaquemines Parish. The suit argues that the RAM terminal conflicts with the state’s master plan for restoring Louisiana’s disappearing coastal wetlands.

“The expansion of coal exports and the associated pollution to the Mississippi and surrounding communities and wetlands flies in the face of Louisiana’s coastal master plan,” said Scott Eustis, Gulf Restoration Network's coastal wetland specialist. “The river is a valuable and limited resource for rebuilding our coastal wetlands, without which we cannot continue to live in Louisiana.”

Louisiana is at particular risk from increased coal exports through the Mississippi River. Three terminals along the Lower Mississippi, including United Bulk, are seeking to dramatically expand exports, which would increase the amount of coal and petcoke stored in open piles, blanket nearby areas in dust and discharge more coal-polluted runoff into vital coastal wetlands.

The international market for U.S. coal has also grown increasingly volatile. Port authorities on the West Coast and in Corpus Christi, TX have concluded that the coal export market is simply too risky to invest significant sums in new or expanded shipping facilities.

“When you look at the big picture, the existing coal terminals in Louisiana are too dirty, and shipping more coal through Louisiana at new terminals is simply too risky,” said Al Armendariz, senior campaign representative with Sierra Club’s Beyond Coal campaign. “The international markets can’t be counted on, the changing climate creates too many variables, and local communities don’t want to be the coal pipeline to India and China. Louisiana leaders should focus on solutions that will help communities prosper—coastal restoration and tapping into the clean energy economy now.”

Both Clean Gulf Commerce Coalition and the Power Past Coal coalition in the Pacific Northwest are focusing attention on health, safety and environmental impacts of existing coal export systems, including shipping coal by rail from mines to the ports.