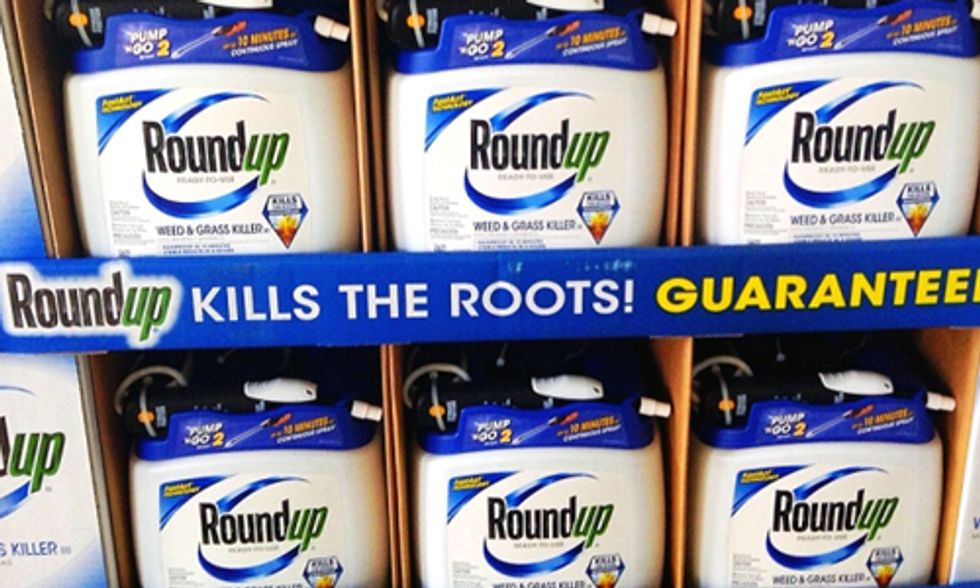 In response to the World Health Organization’s decision to classify the weed-killer glyphosate as a “probably carcinogenic to humans,” Monsanto’s top executive pulled out the rhetorical machine guns, launching an all-out attack against the prestigious international health agency and its scientists.

“Mr. Grant and Monsanto should immediately retract these ridiculous comments and instead turn their attention to the potential risks their product poses to customers, farm workers and the millions of others who are exposed to glyphosate," said Ken Cook, president and co-founder of Environmental Working Group.

“It’s unfortunate that junk science and this kind of mischief can create so much confusion for consumers,” said Hugh Grant, Monsanto’s chairman and CEO, during a call with investors.

Grant was referring to the unanimous conclusion reached by 17 of the world’s leading cancer experts who reviewed hundreds of government and independent studies of the potential health risks from exposure to glyphosate—the main ingredient in Monsanto’s top-selling herbicide, marketed as RoundUp.

Jennifer Sass, a senior scientist at the Natural Resources Defense Council and herself a nationally-recognized expert on pesticides and human health, described in great detail the process the scientists went through in deciding to elevate the cancer assessment of the crop chemical to “probably carcinogenic to humans.”

“Mr. Grant and Monsanto should immediately retract these ridiculous comments and instead turn their attention to the potential risks their product poses to customers, farm workers and the millions of others who are exposed to glyphosate," said Ken Cook, president and co-founder of Environmental Working Group. “A good start would be to fund an independent testing program for glyphosate in air in the Midwest—including towns and cities—during the Roundup saturation-spray season. We’d be happy to help the company design and execute a plan to expand on the U.S. Geological Survey work that found its weed-killer everywhere—air, water, even rainfall—in the areas where it is heavily used.”

Cook added, “Mr. Grant and his investors may need a refresher into Monsanto’s history of mischief and misdeeds that have caused immeasurable harm to people and the environment. Does Anniston, Alabama ring a bell? Monsanto is in the pantheon of chemical companies with a long rap sheet of environmental and public health harm and deception.”

In the May 2008 edition of Vanity Fair, journalists Donald Bartlett and James Steele documented a multitude of transgressions by the seed and pesticide giant in a blistering investigative report. They wrote:

The Monsanto Company has never been one of America’s friendliest corporate citizens. Given Monsanto’s current dominance in the field of bioengineering, it’s worth looking at the company’s own DNA. The future of the company may lie in seeds, but the seeds of the company lie in chemicals. Communities around the world are still reaping the environmental consequences of Monsanto’s origins.

These are just a few more highlights of Monsanto’s history of bad behavior:

Monsanto Co. routinely discharged toxic waste into a west Anniston creek and dumped millions of pounds of PCBs into oozing open-pit landfills. And thousands of pages of Monsanto documents—many emblazoned with warnings such as “CONFIDENTIAL: Read and Destroy”—show that for decades, the corporate giant concealed what it did and what it knew.

In 1966, Monsanto managers discovered that fish submerged in that creek turned belly-up within 10 seconds, spurting blood and shedding skin as if dunked into boiling water. They told no one. In 1969, they found fish in another creek with 7,500 times the legal PCB levels. They decided “there is little object in going to expensive extremes in limiting discharges.”

Why You Should Buy Organic Food for You and Your Family