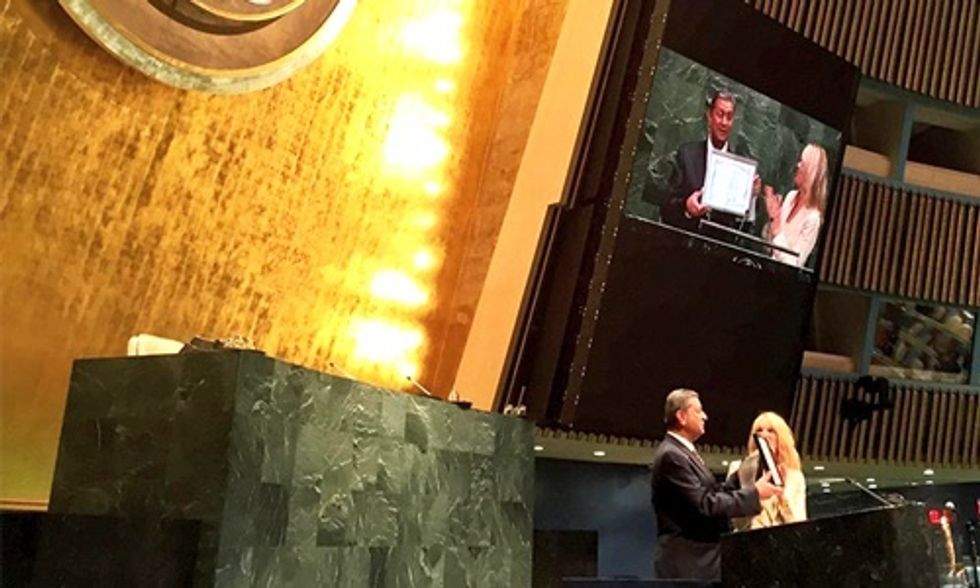 For seven decades, the United Nations (UN) has been a place for people and countries to exchange words instead of weapons and strengthen cooperation to help solve our world’s most pressing challenges. In 2015, civil society’s ideas, talents and passion are needed more than ever.

The 2015 NGO Conference at the United Nations harnessed civil society’s energy while celebrating the 70th Anniversary of the UN. The three-day conference stayed true to its theme: Honoring the Past, Recognizing the Present and Imagining the Future. International civil society constituencies and NGO stakeholders gathered to celebrate their successes and leaders over the years and provide an opportunity to build civil society’s capacity to implement the UN’s post-2015 agenda of the new sustainable development goals (SDGs). I learned a great deal from each and every speaker and panel.

It was truly a privilege to speak at this important convening of minds; about my father, Ted Turner’s, legacy and his continuing support of the United Nations through the years, as well as the ambitious and achievable 2030 SDGs.

On Aug. 2, after a negotiating process that spanned more than two years and featured unprecedented participation of civil society, governments united behind an agenda that features 17 SDGs that aim to end poverty, combat inequalities and promote prosperity while protecting the environment by 2030. I believe this plan for collective action will transform the fate of humanity by addressing the root causes of poverty and inequality, striving to stay in harmony with our planet and meeting the universal need for development that works for all people. It will foster peaceful and just societies, amplify voices around the world and require communication and participation of all governments, stakeholders and people.

My dad has long believed that communication is essential to bring people to higher levels of cooperation and understanding, to elevate people’s voices and to advance humanity. That’s why in 1997, he announced a one billion dollar gift to the UN and created the United Nations Foundation.

At the conference, I had the great honor of presenting a dear family friend and the Chairman of the Global Partnerships Forum, Amir Dossal, with an award for his many years of public service and partnership building. Amir has served as the UN’s chief liaison for my father’s donation, which involves 450 programs and projects in the areas of children’s health, women and population, climate change and biodiversity. Since joining the UN in 1985, Amir has led a number of global initiatives aiding the efforts to achieve the Millennium Development Goals, which included eradicating extreme poverty, reducing child mortality rates and fighting disease epidemics such as AIDS. Amir also served as the executive director for the UN Office for Partnerships from 2005-2010. My family is deeply grateful for his many years of service and we consider it a blessing to be in his circle of friends.

The conference also cast an eye to the future by recognizing the importance of the bright, innovative minds of younger generations and how we must pass on leadership to our youth. We heard from Girl Rising and Half the Sky ambassador Hadia Sheerazi, who discussed gender equality and the vital role the 1.8 billion youth around the world play and whose voices are not often heard in the General Assembly.

I also (proudly) shared the podium with my son, John R., who spoke to his experience working for the UN Foundation and his thoughts on how technology and youth will play critical roles in advancing the 2030 SDGs. John R. cited the innovative Charity Miles app which makes it easy for everyone to become an everyday philanthropist and give back.

Jonathan Granoff, president of the Global Security Institute, moderated a panel titled: Showcasing Successes and Lessons Learned: Celebrating 70 Years of Civil Society at the UN. Jonathan argued that it’s existential that we protect the climate, our oceans’ acid and PH balance, our rainforests and reduce the threat of nuclear weapons. These are not lifestyle options, but great threats to the survival of humanity which cannot be solved without global cooperation. His points were particularly poignant and capture the focus of the conference well.