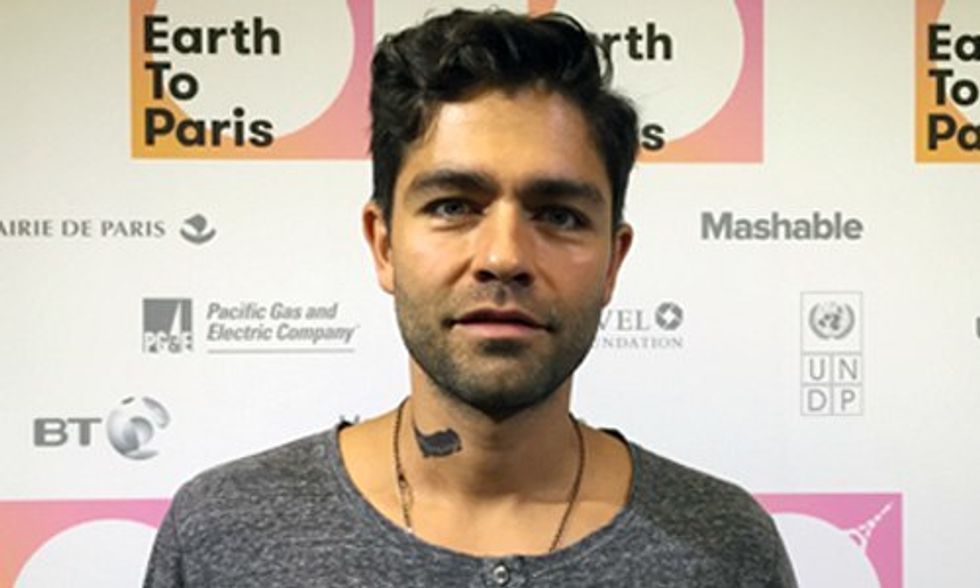 Actor, filmmaker and social advocate Adrian Grenier is best known for his role as the leading man in the HBO series and movie Entourage. By Grenier's own account, the "show promotes a culture of conspicuous consumerism" with Hollywood's elite purchasing cars, homes and big ticket luxury items in nearly every episode. However, Grenier's new "entourage," his co-presenters at the World Climate Summit and Sustainia Award Ceremony in Paris on Dec. 6, are focused on solutions that create a sustainable future.

Plastic Bank's mission to clean up the ocean is a cause near and dear to the actor's heart. Just days before Grenier arrived in Paris for COP21, he launched the Lonely Whale Foundation, along with Producer Lucy Sumner and Director Josh Zeman. Inspired by the heartfelt story of a solitary whale, the Lonely Whale Foundation promotes ocean health awareness through conversation and immersive experience.

Stefanie Spear, founder and CEO of EcoWatch, had the chance to speak with Grenier at the World Climate Summit.

"I'm here to share my support and stand for strong climate action," Grenier told Spear. "I'm actually quite encouraged by the fact that the world is coming together to unite against our greatest common enemy which is climate change and environmental destruction.

"We just launched the Lonely Whale Foundation two days ago for ocean education and awareness. We are building an education curriculum to use our hero symbolic character the lonely whale as an ambassador, as a 'spokeswhale' for all marine wildlife and protection of marine habitats. I'm here with a virtual reality experience that we built to give you an introduction to the story of the lonely whale, and the plight of whales and what they have to face in the oceans with ocean noise pollution and plastics pollution, and to give an immersive experience for those that don't have an opportunity to connect and bond and create those intimate connections with the ocean.

"We believe that if people could experience the ocean and connect with it, they would be more apt to want to protect it because they would have empathy that they gain from the experience.

"One of our missions is to create the bonds and connections for the majority of us who don't have the opportunity to experience what's happening below the surface of the ocean."

The project first began as a focus on the 52 Hertz Whale, a whale that has spent its entire life in solitude—resulting in the feature film 52: The Search for the Loneliest Whale, produced by entertainment and media company Alldayeveryday and Reckless Production.

According to the Lonely Whale Foundation, it operates on the belief that in order to achieve a healthier ocean and environment for marine wildlife, humans must assume the roles of global citizens and work together as stewards of the planet to make positive change in the fragile and complex bodies of water that make up more than 70 percent of the planet.

“The Lonely Whale is not only a real animal, swimming in the pacific, looking for companionship but a symbol of our lack of ocean awareness, and how that disconnect is affecting these beautiful life forms,” Grenier said. “The mission for this foundation has been years in the making, and we hope the result will be greater understanding of our oceans, as well as mobilize our society to ensure that these creatures do not disappear from our oceans.”

11 Reasons Why ‘Everybody Hates Ted Cruz’