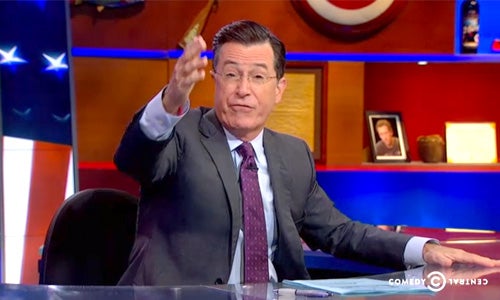 I don’t know about you, but I’m definitely going to miss The Colbert Report. Stephen Colbert has been providing comic relief with countless LOL moments for nearly a decade. Not surprisingly to most, my favorite segments are the ones that focus on the environment. So with this being Colbert’s final week, I thought it timely to share my top five eco-episodes.

1. As a huge Neil Young fan, this episode tops my list where Neil Young and “Crazy Host,” aka Stephen Colbert, performed a duet version of Young’s new environmental song “Who’s Gonna Stand Up? (and Save the Earth).”

2. The “I am not a scientist’ segment exposing climate deniers in Congress days after the midterm elections shows a video montage of Republican leaders mouthing those words.

3. If you didn’t catch Colbert’s episode with author Naomi Klein on her new book This Changes Everything: Capitalism vs. The Climate, watch as Klein explains that abandoning capitalism is the only way to save the planet.

4. Stephen Colbert called out Chevron’s absurd apology tactics in the highly publicized “pizza gift certificate” scandal. As reported on EcoWatch, the vouchers were an attempt to make amends with residents following the fatal gas well explosion at a Chevron Appalachia drilling site in Dunkard, Pennsylvania.

5. It was quite remarkable earlier this month when President Obama appeared on The Colbert Report. Many top issues were covered, including the Keystone XL pipeline.

Governor Cuomo: Fracking Decision ‘By the End of the Year’