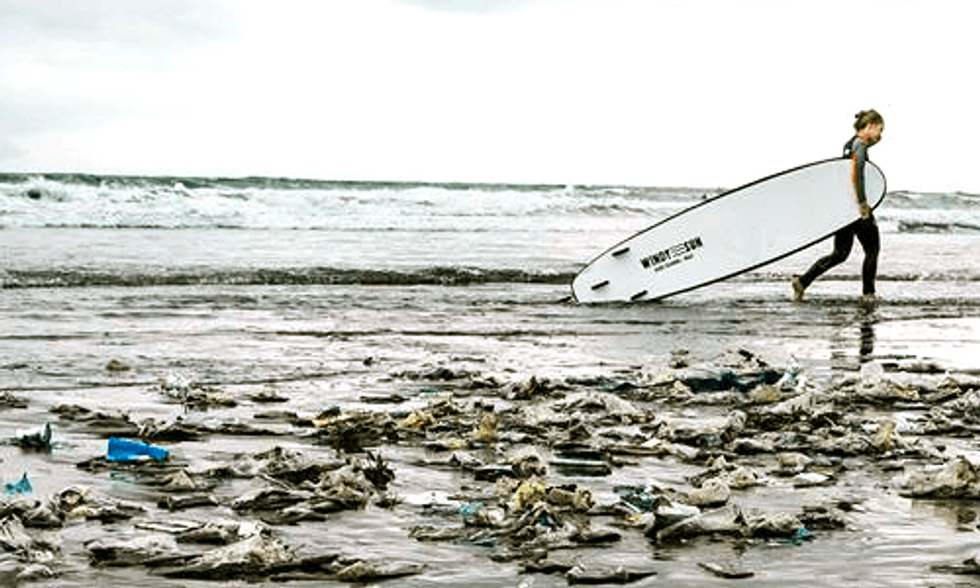 Would you buy shoes or clothes made from trash that is recovered from the ocean?

Adidas has partnered with Parley for the Oceans to develop materials made from ocean plastic waste to use in its products starting in 2016. The sportswear giant will also phase out plastic bags in its 2,900 retail stores around the world. Parley for the Oceans is a team of artists, musicians, actors, directors, fashion designers, journalists, architects, product inventors and scientists that addresses major threats to the world's oceans.

Adidas is trying to decrease the staggering amount of plastic waste that ends up in the world's oceans every year. Photo Credit: Parley for the Oceans

"The conservation of the oceans is a cause that is close to my heart and those of many employees at the Adidas Group," said Eric Liedtke, Adidas Group executive board member responsible for global brands. "By partnering with Parley for the Oceans we are contributing to a great environmental cause. We co-create fabrics made from ocean plastic waste which we will integrate into our product."

As we previously mentioned, plastic—from plastic bags and bottles to tiny microbeads of plastic broken down from larger sources—is a major threat to marine life and marine ecosystems. The staggering 8 million tons of plastic tossed into the oceans every year also causes about $13 billion in damages annually.

"Our oceans are about to collapse and there is not much time left to turn it around. Nobody can solve this alone. Everyone has to be part of the solution. And collaboration is the magic formula," said Cyrill Gutsch, founder of Parley for the Oceans. "We are extremely excited about this partnership. There is no other brand that carries the culture of collaboration in the DNA like Adidas. Together, we will not only focus on creating the next generation of design concepts, technologies, materials and products. We will also engage consumers, athletes, artists, designers, actors, musicians, scientists and environmentalists to raise their voice and contribute their skills for the ocean cause."

Besides Adidas, many other major clothing companies are ramping up their sustainability practices. Outdoor clothing company Patagonia is making efforts to get rid of toxic chemicals in their materials. Additionally, fast fashion retailer H&M is the world’s largest purchaser of organic cotton and has set up an in-store recycling program, which has brought in around 13,000 tons of clothing.

The announcement from Adidas coincides with the publication of their 15th annual sustainability report, which highlighted the company's efforts to green up their gear. According to the report, the iconic sportswear brand has used more sustainable cotton than ever before, with 30 percent of all its cotton coming from sustainable sources, exceeding the originally planned 25 percent target. The company has committed to 100 percent sustainable cotton by 2018 and has also increased quantities of recycled polyester into their product line.

Adidas, along with Nike and Puma, made a major commitment to eliminating all discharges of hazardous chemicals throughout their supply chain and across the entire life cycle of their products by 2020. However, environmental groups such as Greenpeace criticized the sportswear brands last May for failing to take the critical steps needed to meet its target.

But now, in its most recent Detox Catwalk report, Greenpeace praised the clothing brand for its latest environmental initiatives. "Adidas is now back on track as a Detox leader. Two years after it crossed the line as one of the original Detox pioneers, Adidas began failing to meet its commitment. That was until global pressure from the Detox movement helped it get back on side in June 2014," Greenpeace said. "Adidas has delivered on its commitment to ensure that 99 percent of its wet processing supply chain facilities in China publicly report data via the credible Institute for Environmental Affairs platform. It also publishes its list of suppliers and encourages facilities to divulge their respective customers when reporting data."