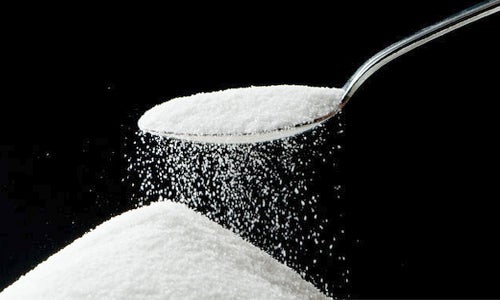 Food and beverage companies regularly obscure the negative health effects of over-consuming sugar when trying to influence food policy, according to a new report from the Center for Science and Democracy at the Union of Concerned Scientists (UCS). The report, Added Sugar, Subtracted Science, comes as Congress debates allowing states to opt out of federal school lunch standards and as the U.S. Food and Drug Administration (FDA) considers an added-sugar label on foods. 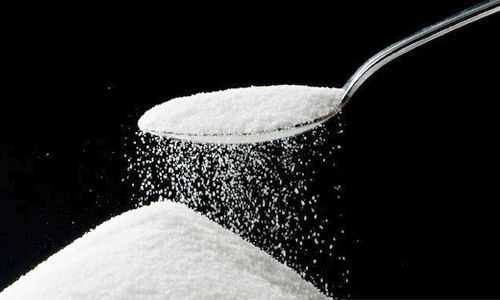 The new report from the Union of Concerned Scientists finds that the sugar industry obscures health science in policymaking. Image credit: UCS

“Sugar interests are using the same playbook the tobacco industry pioneered,” said Gretchen Goldman, a lead analyst for the center and the report’s author. “They question the science, hire their own experts and try to hide the simple fact that eating too much sugar is bad for our health.”

Scientific evidence clearly links over-consuming sugar to heart disease, obesity, diabetes and other illnesses, but in many cases, trade groups and the companies they represent dismiss the evidence and refuse to acknowledge the public health damage their products cause.

For instance, while seeking to weaken federal school lunch standards in 2013, General Mills told the U.S. Department of Agriculture (USDA) that except for dental issues “sugar intake has not been shown to be directly associated with obesity or any chronic disease or health condition.”

Similarly, the Sugar Association told the USDA that “experts continue to conclude that sugar intake is not a causative factor in any disease, including obesity.” Ultimately, the USDA adopted a weaker rule than it first proposed, limiting kids’ sugar intake at school by weight rather than by calorie as public health experts had recommended. 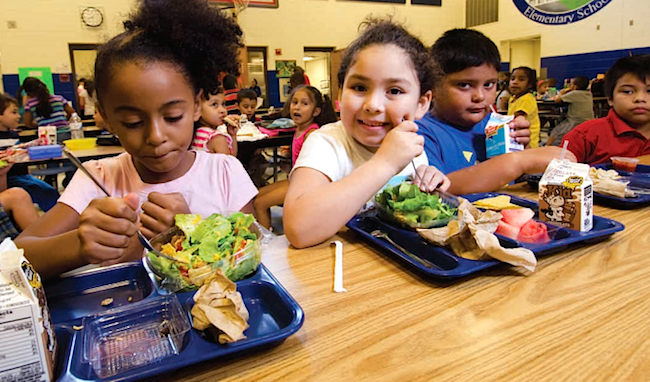 Many solutions are available to help ensure the U.S. has more science-based health and nutrition policies. Better school nutrition programs across the country are being implemented to provide children with healthier options and less sugar, salt and fat in school foods. Photo credit: UCS report

The CRA has long funded two controversial scientists to produce research that aligned with CRA’s policy goals. Dr. John White and Dr. James Rippe were paid to promote the idea that corn syrup affects the body the same way table sugar does. A 2013 email from an employee at Cargill, which sits on the group’s board, described Dr. White as “CRA’s hired gun.”

Similarly, CRA has suggested that inconvenient findings about sugar should be concealed from the public. When a 2011 University of Southern California study found that there was more high fructose corn syrup in products than companies were disclosing, a CRA consultant suggested that the group sponsor its own research and that “if for any reason the results confirm [the original study], we can just bury the data.”

In 2009, the Sugar Association created a website to promote unscientific claims about sugar and diabetes. The now-defunct website claimed that “No! Sugar in the diet does not cause diabetes.” Similarly, for Halloween in 2010, the group created a factsheet that claimed “sugar adds to the quality of children’s diet.” A memo from a staffer at the time described the group’s strategy to “question the existing science” on the health effects of glucose versus sucrose.

The food industry adds sugar to a variety of products, including cereal, yogurt, soup and bread. Americans consume about twice as much sugar, on average, than the USDA indicates they should in its dietary guidelines. 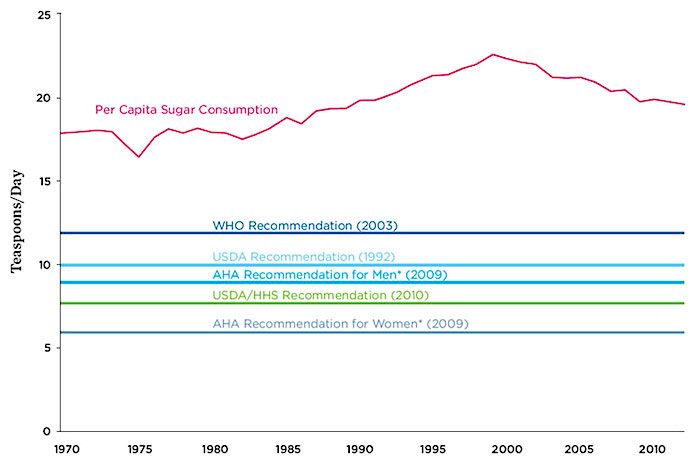 The per capita consumption of sugar in the U.S. far exceeds the limits recommended by several scientiﬁc and governmental institutions including the WHO, the HHS, the USDA and the AHA. Image credit: UCS report

Goldman will share the report findings at a June 26 public hearing the FDA is hosting in Washington, D.C. on its proposed added sugar label and other Nutrition Facts label changes. Several trade groups, including the Sugar Association, have already asked FDA to extend the comment period on the rule and the Grocery Manufacturers Association is promoting a misleading voluntary labeling program for its members. Other trade groups, including the CRA, have asked the FDA to wait for them to conduct their own research regarding consumer reception of new label changes.

Several public health experts have written to the FDA to ask the agency to adopt an added sugar label.  Last month, the Center for Science and Democracy at UCS released a report documenting how the food industry obscures the added sugar in its products, including by highlighting other nutritional information, such as protein content in yogurt and whole grains in cereal.

“The good news is that the science is clear and people seem to be waking up to the risks associated with eating too much sugar,” Goldman said. “The bad news is that producers of sugar and sugary products continue to mislead decision makers on the science in order to undermine health and food policies.”

The report recommends that researchers disclose all real or perceived conflicts of interest, that investors and citizens pressure companies to align their consumer marketing and policy advocacy efforts with established science, and that Congress and federal agencies enhance transparency around corporate political activities.