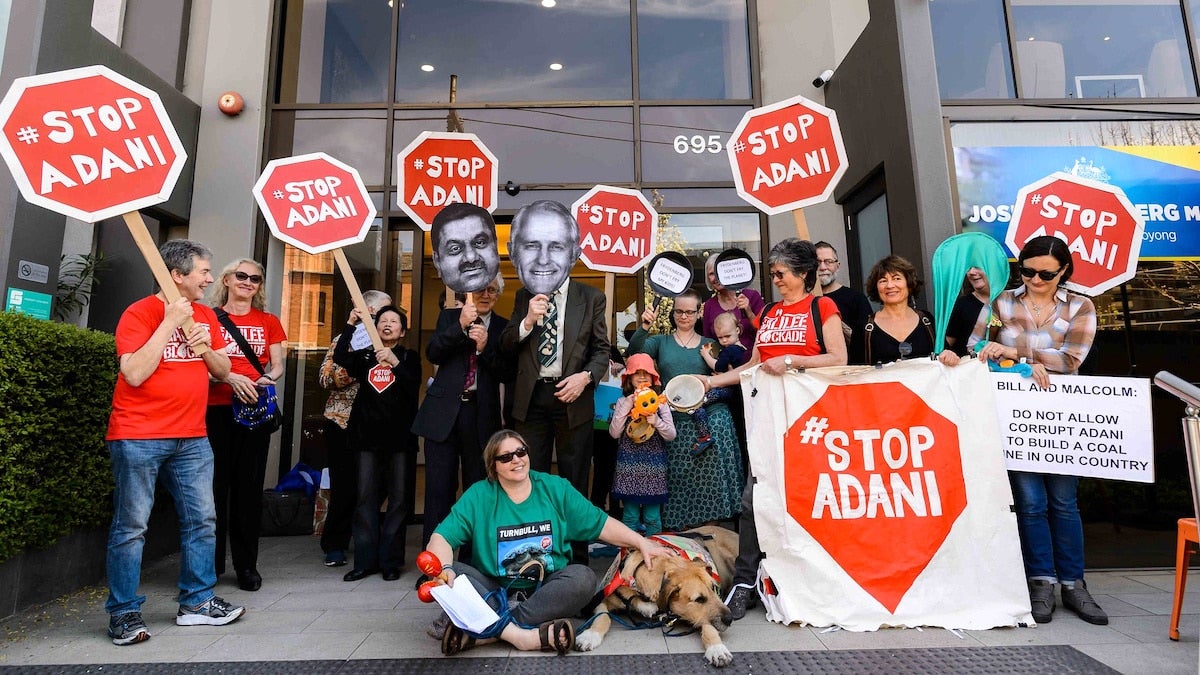 Coal company Adani sought to raid the home of an environmental activist who opposed its controversial mine in Queensland, Australia’s Galilee Basin, court documents have shown.

The company tried twice to request a search order known as an Anton Piller order to enter the home of activist Benjamin Pennings, maintaining that he had access to confidential documents that only company higher ups should possess, Australia’s ABC News reported Wednesday.

“My wife and I have three school-aged children living at home, one with a disability,” Pennings said in a statement reported by ABC News. “Adani has failed in two recent Supreme Court applications to raid our family home for corporate secrets they believe I possess. They want to silence dissent about their destructive thermal coal project that a majority of Australians oppose.”

Pennings handles media and strategy for Galilee Blockade, an activist group that uses non-violent direct action like boycotts and blockades to prevent fossil fuel extraction in the Galilee Basin.

Adani’s mine is controversial in part because it would open up the area, a currently untapped coal reserve, for eight other mines, according to another activist group Stop Adani. Adani’s mine alone would add 4.6 billion tonnes (approximately 5 billion U.S. tons) of carbon dioxide to the atmosphere at a time when Australia is already suffering from bushfires and flooding made worse by the climate crisis.

Adani’s attempts to search Pennings’ home were intended to bolster a civil case the company served against the activist on Wednesday, The Guardian reported.

Adani is suing Pennings for financial losses, intimidation, conspiracy and court costs. They claim activist pressure prompted contractors Downer EDI, AECOM and Greyhound Australia to drop their support of the mine.

Ahead of the suit, the company and its Carmichael Rail Network applied for the Anton Piller order to prove Pennings had “confidential information on a computer at his home” that only company executives should have had access to. Anton Piller orders are used to secure evidence from defendants for legal proceedings.

Adani and Charmichael first applied for the order in June and then appealed the court’s initial rejection in July.

In rejecting the appeal, the court ruled that the company did not have enough evidence to justify a search that could cause undue harm to Pennings and his family.

“Surely, to permit a search of a defendant’s house, with the humiliation and family distress which that might involve, lies at the outer boundary of the discretion,” the Court of Appeal judges ruled last week, as ABC News reported. “This is because, for reasons that anyone can understand, the ‘shock, anger, confusion’ and the ‘sense of violation and powerlessness’ will be much greater in such a case and may be suffered not only by someone who is proved in due course to be a wrongdoer, but by entirely innocent parties as well.”

Adani maintained that, in pursuing legal action against Pennings, it was not seeking to restrict free speech.

“We really believe that everyone has the right to express their own opinion, we support that. It’s a core part of democracy,” Adani in Australia communications lead Kate Campbell told ABC News. “But we think it’s important that people express their opinions in a way that’s legal, that’s safe and that does not prevent others from going about their legal and legitimate business. Mr. Pennings is preventing us from going about our business because of the campaign of intimidation and harassment.”

He said Adani’s legal action would “send a shudder through every Australian who values democracy, free speech and the right to peaceful protest,” The Guardian reported.