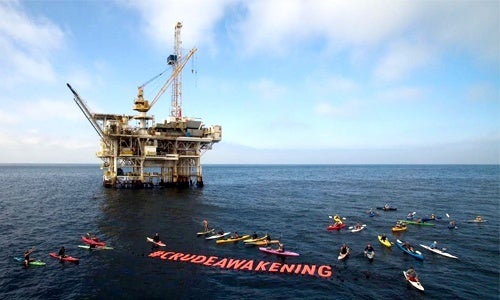 Activists in Santa Barbara, California took to the sea this past weekend to “raise awareness and generate action in support of four critical bills currently moving through the State Assembly” to help stop future offshore oil spills. The kayaktivists paddled out five miles and unfurled a 70-foot floating banner that read: #CrudeAwakening.

The groups involved said the Refugio Oil Spill off the coast of Santa Barbara this past May was a “rude awakening” for them. The spill ended up blanketing the shore and coastal waters with 140,000 gallons of crude oil.

“It shut down beaches, greased marine protected areas and killed or injured several hundred birds and marine mammals,” said Patagonia. “The effects continue to linger and likely will for some time. If there’s any upside to this horrible mess, we now have a good opportunity to stop future spills.”

The event was organized by the Surfrider Foundation, in collaboration with Patagonia, Environmental Defense Center and Santa Barbara Channelkeeper.

According to the groups, the bills currently moving through the State Assembly would:

“While we all remain dependent on fossil fuels, we don’t need more drilling on our coast,” said Patagonia. “We believe environmental disasters can move our society in the right direction—toward renewable alternatives, and safer ways of producing oil and gas in the interim. Offshore oil production is just too risky—oil spills and damage to the coast and ocean are simply inevitable.”