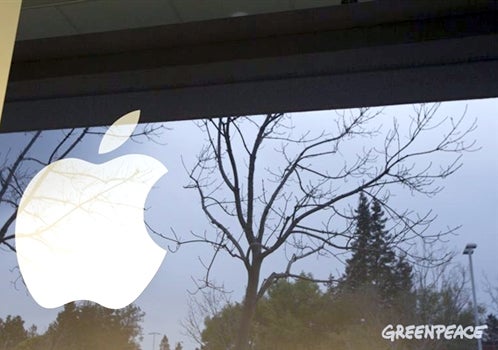 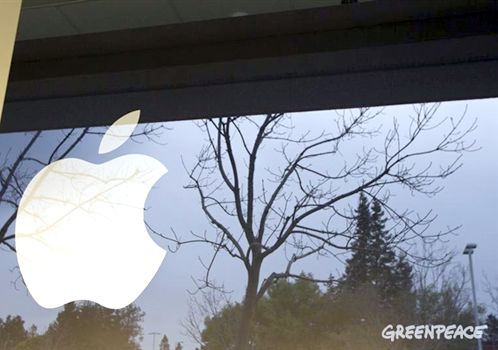 Today Greenpeace activists are demonstrating at Apple stores in San Francisco, New York and Toronto asking Apple to “Clean our Cloud” as part of a campaign to get the company to power its massive data centers with renewable energy instead of coal.

“People around the world want to use their iPhones and iPads with the knowledge that our cloud is being powered by clean energy, not dirty pollution pumped out of coal-fired smokestacks,” said Kumi Naidoo, Greenpeace International executive director.

At stores on Fifth Ave. in New York and on Stockton St. in San Francisco, Greenpeace activists released hundreds of black balloons in the stores with cartoon clouds printed on them to represent the dirty cloud.  A “cloud cleaning crew” in uniform is miming cleaning up the store using white squeegees and other cleaning materials, and other activists are changing the home screens of the computers to cleanourcloud.com. In San Francisco, activists are passing out business cards that say “We can’t really clean the cloud with a squeegee or a mop. But Apple can clean our cloud. Join Greenpeace and urge Apple to power our cloud with renewable energy. Find out how at www.cleanourcloud.com.

“Of all the IT companies we’ve examined in our recent report ‘How Clean is Your Cloud?’ Apple has the greatest potential to lead the sector in renewable energy and innovation,” said Gary Cook, Greenpeace International senior policy analyst. “Their history of out-of-the-box thinking and huge cash reserves positions them as the best IT company to transform the sector.”

“How Clean is Your Cloud?” evaluated 14 IT companies based on key elements needed to build a clean cloud, including the electricity supply chain of more than 80 data centers associated with major brands. The report found that Google and Yahoo are showing commitment to clean energy while Apple, Amazon and Microsoft rely heavily on outdated coal and nuclear energy to deliver their clouds.

Apple has made an investment in solar energy to provide a part of the current power for its growing data center in North Carolina, but they can do much more to clean up their rapidly growing iCloud. Despite their claims, they haven’t disclosed enough information about how they will provide power for their data centre in Prineville to prove that it will be powered with renewables. Apple should commit to greater transparency, follow the lead of Facebook, who has committed to power its data centers with renewable energy, and set a policy to build future data centers in locations that have access to renewable energy.  Apple can also use their market power to encourage utilities like Duke Energy, which will partly power their North Carolina data center, to provide clean energy options and stop the use of mountaintop removal coal.

Companies like Google, Facebook and Yahoo are beginning to lead the sector down a clean energy pathway through innovations in energy efficiency, prioritizing access to renewable energy in siting their data centers, and demanding better energy options from utilities and government decision-makers. Greenpeace is calling on all IT companies with cloud services, including Apple, to: