Activists Shut Down UK's Gas Power Station for One Week 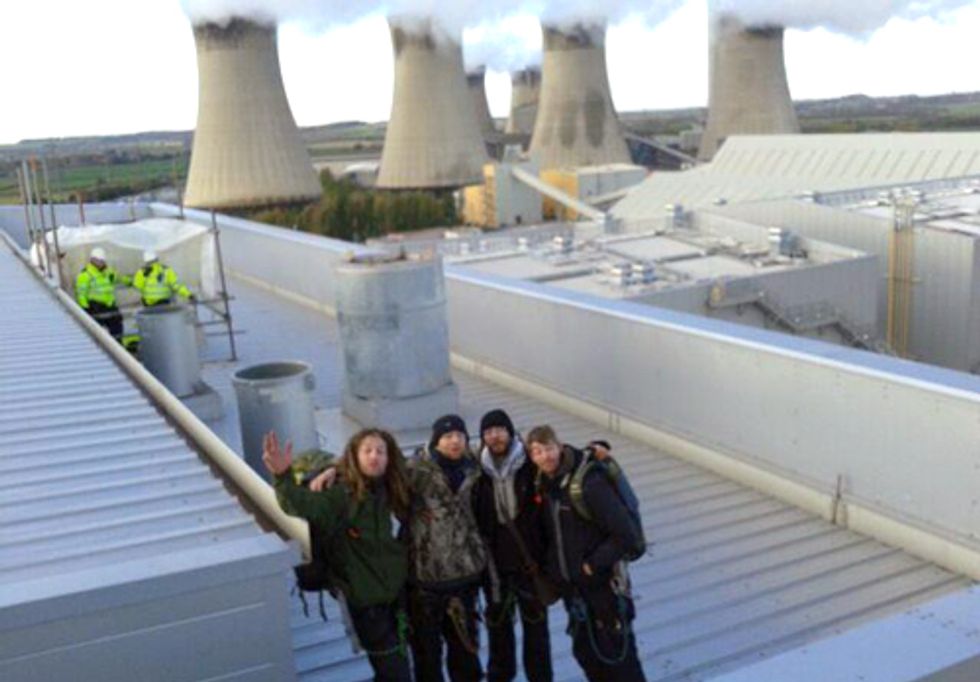 This morning the last two protestors occupying the chimney of a huge gas power station in the UK intend to end their protest having shut the new power station down for a week.

This morning the last two protesters from the No Dash for Gas group occupying the chimney of a huge gas power station in the UK intend to end their protest having shut the new power station down for a week.

They and other protesters who have already come down have been protesting against the UK government’s latest “Dash for Gas.”

They have been occupying the West Burton gas power station’s chimney in Nottinghamshire, England, operated by EDF with a camp outside and inside the 80 meter high chimney. West Burton is the UK’s newest gas plant and the first of 20 new gas-fired power stations planned by the government.

The protest is the longest power station occupation ever in the UK and the only one in the UK that has actually managed to shut down operations.

In all, sixteen people occupied two of the chimneys at the site, including Ewa Jasiewicz, who wrote last week:

“It’s pretty scary hanging inside the chimney on a portaledge ... We’re doing this because the gas plant, which is still being constructed by its operator, EDF, is one of the first in a new dash for gas that has to be stopped. The government and the big energy companies want to build as many as 20 new gas power stations, which would leave the UK dependent on this highly polluting and increasingly expensive fuel for decades to come.”

Indeed the activists have stopped 10,000 tons of CO2 from entering the atmosphere by their protest.

Even some Conservative Members of Parliament (MP) are warning against this. “The idea that unabated gas is a long-term solution is mistaken,” argues Tim Yeo, the Conservative MP and chairman of the Energy and Climate Change Select Committee. “There is a significant risk in being very dependent on gas in the 2020s because the world price may be much higher than it is now.”

But others warn that it is not just price we should be worried about. Caroline Flint, Labour’s shadow energy secretary, said: “There is a real risk the government’s dash for gas will blow a hole through our climate change targets, undermine investment in clean energy and leave households vulnerable to price shocks and rising energy bills.”

Indeed Damian Carrington from the Guardian argues that “unless you don’t believe climate change is a threat, or you do believe in the UK shale gas fantasy, the dash for gas looks dumb.”

It looks especially dumb in light of Hurricane Sandy, yet another warning from a warming world. The protesters have made the connection too. “Hurricane Sandy is being directly linked to climate change, which is directly linked to the amount of fossil fuels, like gas, that we burn. Being up here in light of the damage we’re seeing from the hurricane feels like the most responsible thing we could be doing,” said Jasiewicz.

She continues by arguing that “We believe that another future is possible—one that puts the needs of people and the environment ahead of big corporations and profit.”