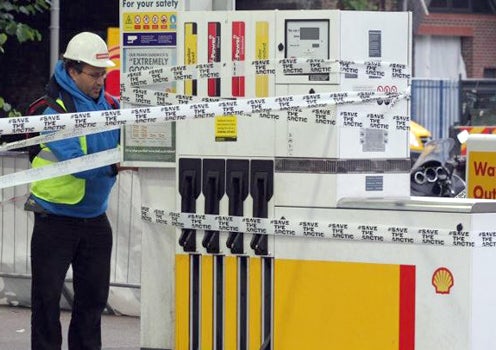 Greenpeace campaigners attempted to shut down every Shell petrol station in the capital cities of London and Edinburgh just as the oil company is about to drill in the Arctic for the very first time.

The environmental group, who recently launched a star-studded campaign to save the Arctic, intended to close more than 100 stations in London and more than a dozen in Edinburgh by using the emergency shut-off switch, which stops petrol going to the pumps, and removing the fuse so it can’t immediately be turned back on again. Ultimately, activists succeeded in shutting down 77 filling stations.

Campaigners spent the day touring the two cities using a combination of low-emission cars, bikes and public transport and shutting off the petrol supply to the pumps.

Greenpeace televised the activities in a 12-hour live online television special that began at 8 a.m. The show was anchored from purpose-built studios in Greenpeace’s London base, and went live throughout the day to campaigners as they shut down Shell’s capital city operations.

Shell is due to begin drilling at two offshore sites in the Alaskan Arctic in the coming weeks, amid fears that an Arctic oil rush will be sparked and the push to carve up the region will accelerate. Russian oil giant Gazprom is also venturing into the Arctic this year.

On July 15 it was revealed that one of Shell’s two drilling ships ran aground in an Alaskan harbour as the fleet was making final preparations to drill for oil in the Arctic.

At the Shell garage on Queenstown Road, next to London’s Battersea Park, volunteers scaled the roof and operated a life-sized, super-realistic polar bear puppet. On Dalry Road in Edinburgh, campaigners also scaled the garage roof.

“The oil giant Shell is preparing, for the first time, to unleash a drilling fleet of huge vessels upon the fragile and beautiful Arctic, home of the polar bears.

“It’s time to draw a line in the ice and tell Shell to stop. That’s why today we’re going to shut down all of Shell’s petrol stations in the capital cities of London and Edinburgh. We’ve got dozens of people who will hit over 100 Shell garages throughout the day and we’ll be televising it live on a special dedicated online TV channel.

“An oil spill in the Arctic would be catastrophic for wildlife such as walruses and whales, and Shell knows full well that it would be impossible to clean up after such devastation. The Arctic must be saved, and made a global sanctuary where oil drilling is banned.”

Last month, stars from the worlds of music, film, television and business launched a campaign to save the Arctic.

They were among the first one hundred names to be written on an Arctic Scroll, which has now been signed by more than 850,000 people. Anybody in the world can add their name to the Arctic Scroll by clicking here.