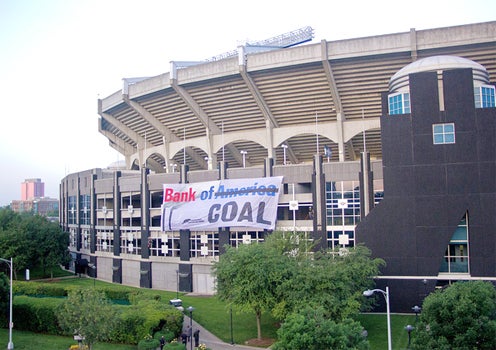 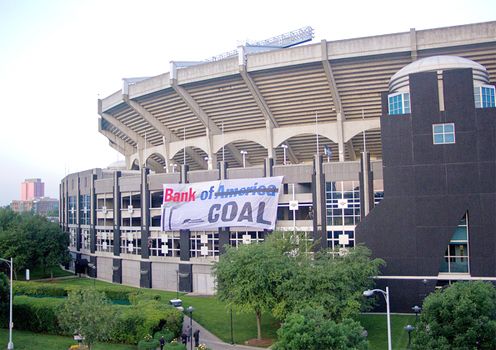 The much-politicized Bank of America stadium received a facelift today when five people with Rainforest Action Network (RAN) skillfully unfurled a 70-foot by 25-foot banner off the top of the building, rebranding the stadium the “Bank of Coal.” Just days before the bank’s annual shareholder meeting, the act was intended to call attention to the bank’s role as the leading financier of the coal industry, one of the main concerns for bank critics.

The advocates, all trained climbers with safety gear, hung from the outside of the stadium more than 100-feet above the ground.

In the past two years alone, Bank of America has pumped $6.74 billion into the U.S. coal industry according to Bloomberg data. The Bank of America Stadium is where President Obama will accept the Democratic Party’s nomination to a second term in early September, and, to many, symbolizes the cozy relationship between banks and government highlighted throughout the Occupy protests.

“Today, Rainforest Action Network has taken our message to extraordinary heights because the risk that coal poses to our health and our climate is nothing less than extraordinary. It’s past time Bank of America take a leadership role in transitioning our economy away from this dangerous and outdated industry,” said Todd Zimmer, a lifelong Charlotte resident and organizer with Rainforest Action Network.

Today’s action kicks off a week of events leading up to Bank of America’s annual shareholder meeting on May 9 where organizers predict more than 1,000 people plan to protest the company.

Not only is coal burning responsible for one third of U.S. carbon emissions—the main contributor to climate change—but it is also a major public health risk. In 2012, one in every four children living in Charlotte will develop asthma or other respiratory problems, while 3,000 North Carolinians die prematurely every year, all due to air pollution.

There are four coal plants in the Charlotte area. Duke’s Riverbend plant, which Bank of America finances, is within 12 miles of Uptown Charlotte.

“Bank of America is the ATM for a dirty industry that is bad for health and bad for business,” said Amanda Starbuck, director of Rainforest Action Network’s Energy and Finance Program. “If Bank of America would like to regain the trust of the 99 percent, it must adopt sound economic and environmental policies that reflect the values of its customers. Bank of America can start by getting out of bed with the coal industry, and shifting its funding toward renewable energy sources that will have long term benefits for our environment, our health and our economy.”

Nationally, coal pollution is responsible for 13,000 premature deaths every year, more than $100 billion in annual health costs and more than 200,000 asthma attacks annually. Pollution from coal-fired power plants leads to smog, which can cause chest pain, coughing and breathing difficulties and can make conditions like bronchitis, emphysema and asthma worse or even fatal. Today, two out of every five U.S. families live in places with unsafe air.

On May 1, RAN released its third annual Coal Finance Report Card, which ranks the largest financiers of mountaintop removal coal mining and coal-fired power plants. Bank of America received a failing grade for its weak coal policy and considerable exposure to the industry. Bank of America funds every sector of the U.S. coal industry, including companies operating controversial mountaintop removal coal mining and those planning to build out coal export terminals along the Pacific Northwest coastline.

Join these activists in speaking truth to power. Sign and share this petition calling on Bank of America to stop funding dirty coal now.