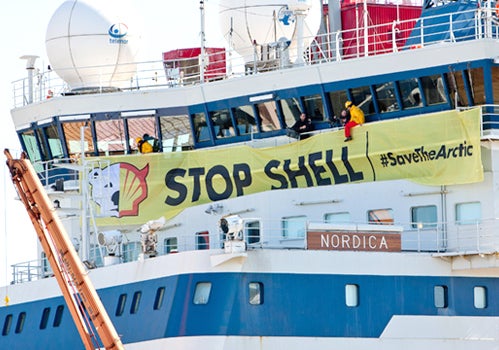 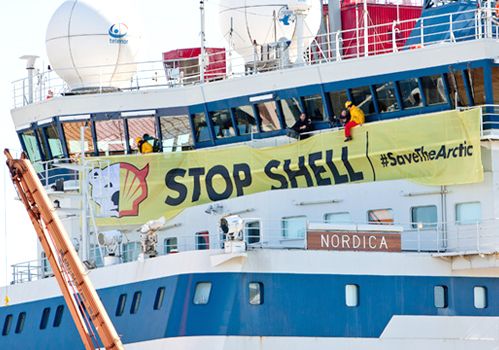 In an effort to prevent destructive oil drilling in the Arctic, dozens of Greenpeace Nordic activists have boarded and occupied a Shell-contracted icebreaker in Helsinki harbour on May 1 as it prepared to leave for the Alaskan Arctic.

At 10:30 a.m. in Helsinki, Finland, 20 activists from 13 different countries boarded the Nordica and have locked themselves down throughout the ship, from the cabins to the top of the mast. Greenpeace is calling on the oil giant Shell to abandon its controversial plans to open up the fragile Arctic for oil drilling.

“We are here on behalf of the nearly 400,000 people around the world who in just a couple of months have spoken out demanding that Shell cancel its reckless campaign of Arctic destruction,” said Greenpeace Campaign Manager in Finland, Tapio Laakso. “Oil companies know full well that an oil spill off the Alaskan coast would devastate the environment and prove impossible to clean up.”

The Nordica is one of two Shell-contracted icebreakers owned by the Finnish government.1 Activists have also deployed banners on the key side, in the ship’s crane and a 20 x 3 meter banner on the side of the ship reading Stop Shell.

“For the first time in our history we are faced with the possibility of a world without ice at the North Pole and without a home for polar bears, narwhals and walrus. It is fundamentally wrong that Shell is making money off of a global catastrophe of its own creation,” said Finnish activist Maria Hukkamäki. “I am here onboard this ship to say no to Arctic drilling and call for the protection of one the world’s most fragile and beautiful environments.”

The Nordica is heading to Alaska to join its sister ship, the Fennica, to support the Kulluk and Noble Discoverer, the two drillships en route to the north coast of Alaska to drill five exploratory wells for Shell in the Chukchi and Beaufort Seas, respectively.

Shell is the first major international oil company to make exploitation of the Arctic a serious corporate focus. If it strikes oil this summer, other global oil giants will quickly follow and spark a dangerous Arctic oil rush.

The Arctic region’s extreme weather and short summer season means Shell has a very small window for drilling its exploratory wells before the return of winter sea ice. The freezing temperatures, the unpredictable weather, and the remoteness of the drill sites all pose unprecedented operational challenges and would make an Arctic oil spill impossible to contain and clean up.2

With carbon emissions causing temperatures in the Arctic to rise faster than anywhere else on earth3 sea ice—which reflects much of the sun’s heat safely back into space—is in rapid retreat, causing further temperature rises. Studies show that extracting all the oil in the Arctic would only satisfy three years of global demand.4

4. Total estimated Arctic oil reserves would satisfy just three years of current global oil demand, but would both contribute significantly to carbon emissions and pose a grave risk to the local ecosystem. Numerous reports show that through energy efficiency and clean energy, global energy needs can easily be met while leaving the Arctic untouched. According to the U.S. Geological Survey the Arctic contains a maximum of 90 billion barrels of oil. Global demand is currently roughly 90 million barrels per day (mb/d); the IEA’s world energy outlook 2011 anticipates that oil demand (excluding biofuels) will rise from 87 mb/d in 2010 to 99 mb/d in 2035. By calculation, this amounts to at most three years of global oil consumption in the Arctic.