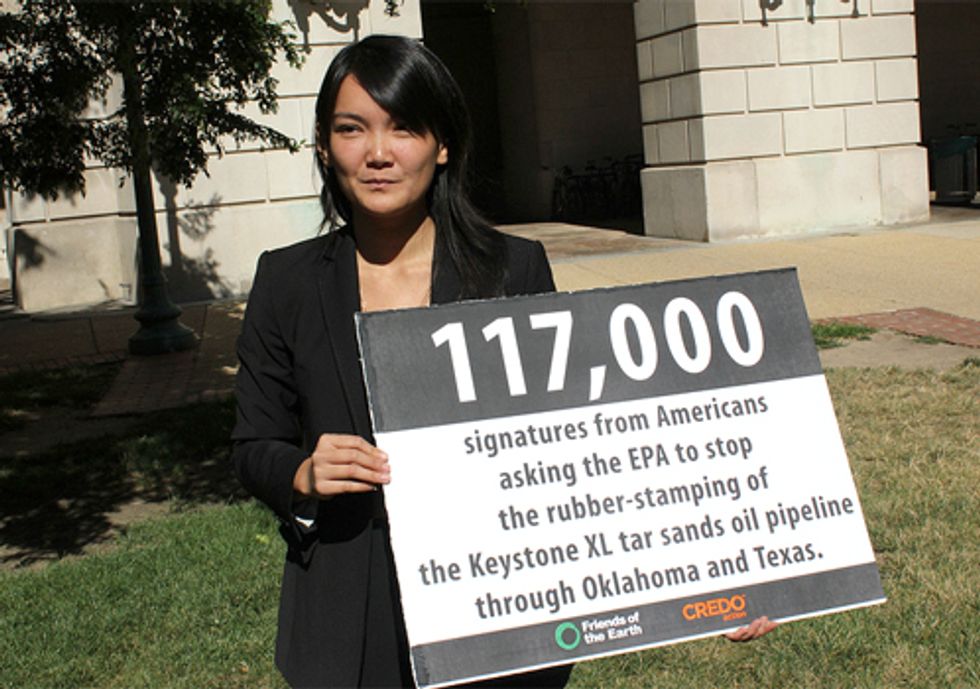 As the Army Corps of Engineers began granting TransCanada  fast-tracked approval to start building the southern leg of the controversial Keystone XL tar sands oil pipeline this week, people across the region and around the country called on U.S. Environmental Protection Agency (EPA) Administrator Lisa Jackson to stand up for the public interest and intervene.

“President Obama abandoned Texans and Oklahomans to the whims of Big Oil and an Army Corps that appears only too willing to serve them,” said Kim Huynh, dirty fuels campaigner at Friends of the Earth. “The Army Corps has shown a willful disregard for the concerns of residents whose health, land and livelihoods are at stake if Keystone XL is rubber-stamped, which is why we’re calling on Administrator Lisa Jackson to step in and call for a full environmental review.”

The New York Times reported this morning that one of the three regional Army Corps of Engineers offices reviewing TransCanada’s federal permit application had rubber-stamped the southernmost portion of the pipeline’s route through Texas on June 25.

On June 26 in Austin, concerned Texans converged to testify about the risks of tar sands oil pipelines at a state oil and gas hearing and are holding a press conference afterwards with Michigan resident Michelle Barlond-Smith, who described the ongoing impacts of the disastrous Enbridge tar sands oil spill into the Kalamazoo River. Today, concerned Oklahomans will hold a citizens’ “public hearing” in Tulsa to protest the Army Corps’ stonewalling of their concerns.

“On issues of concern for environmental justice, impacted communities, and public health related to environmental toxins, the Army Corps' has no jurisdiction, so why should they be the agency to have the last word on the Keystone XL pipeline?,” said Juan Parras, director of Texas Environmental Justice Advocacy Services (TEJAS). “I firmly believe the EPA is capable and better equipped to conduct an EIS and as such should do so.”

In Washington, D.C., activists delivered more than 117,000 signatures from CREDO Action and Friends of the Earth supporters to EPA headquarters on June 26, calling on Administrator Lisa Jackson to intervene and stop the Army Corp’s rubber-stamping of the Keystone XL southern segment permit. (View pictures of the delivery.)

“It is outrageous that the Army Corps of Engineers would rubber stamp, in one fell swoop, a foreign pipeline company’s request to endanger more than 100 waterways,” said Elijah Zarlin, Campaign Manager for CREDO Action. “Lisa Jackson has been the one leader in the Obama administration most willing to stand up to polluters and we're depending on her to be a hero once again. The EPA must take action to prevent the Army Corps of Engineers from selling us out to TransCanada and ensuring certain disaster for the environment and our public health.”

After splitting its Keystone XL project into two parts, TransCanada quietly applied to the Army Corps of Engineers offices in Galveston, Tulsa and Ft. Worth for a catch-all Nationwide Permit 12 for the southern leg. A Nationwide Permit 12 would grant blanket approval for hundreds of pipeline water crossings in Oklahoma and Texas without any environmental impacts review or public input, despite the determination by EPA Region VI Associate Director Dr. Jane Watson that the original Keystone XL project was ineligible for this blanket water permit.

“EPA Administrator Lisa Jackson has stood her ground on numerous environmentally threatening lawsuits brought on by the State of Texas against the EPA, and in those situations, the EPA succeeded,” Parras said. “If in fact, environmental justice is a priority for this administration, as it has made us believe, then the obvious thing to do is to carry out the mandates of the Clean Water Act for the sake of making sure we all have safe drinking water, in the South as in other parts of the country.”

According to news reports, the Galveston and Tulsa offices’ 45-day windows for reviewing TransCanada’s application for a Nationwide Permit 12 were to run out on June 25 and June 28 respectively, at which time TransCanada’s permit could be approved by default. The Ft. Worth office has yet to publicly confirm its timetable.

“Politicians have an obligation to be fair and balanced. Landowners in Texas do not have a single politician to turn to for help. Their loyalty has been sold to the highest bidder. Texas U.S. Senate Candidates, Lieutenant Gov. David Dewhurst and former Solicitor General Ted Cruz, ignored landowners concerns about the Keystone XL pipeline in a recent debate,” said David Daniel, president of Stop Tar Sands Oil Pipelines and a landowner in east Texas whose property would be split in half by the southern segment.

Non-violent direct action to stop the export leg of the Keystone XL pipeline is already being organized for this summer, under the name Tar Sands Blockade, should TransCanada move ahead with construction.

The Obama administration’s decision on the Keystone XL pipeline’s northern and southern legs will have far-ranging consequences for communities’ drinking water, public health and local economies all along its path as well as for our shared climate. The southern leg of Keystone XL would provide the industry a crucial link for relieving the current glut of tar sands oil in the Midwest by piping it down to refineries and international shipping ports on the Gulf Coast for export. The project would inflate oil industry profits while threatening America’s heartland with costly spills, increasing already debilitating air pollution in refinery communities on the Gulf Coast, and driving the expansion of climate-destabilizing tar sands oil development and consumption.