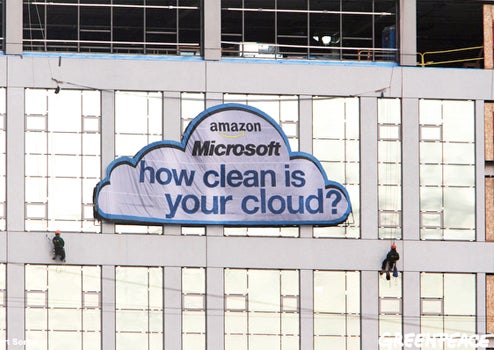 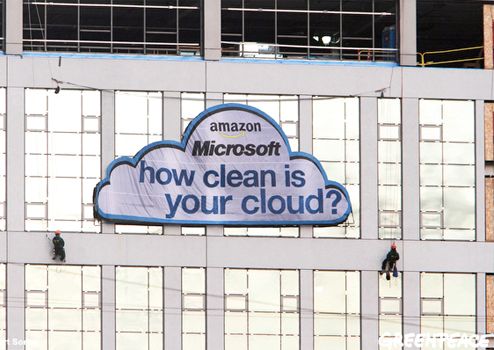 Greenpeace activists floated a cloud over downtown Seattle today in a demonstration to draw attention to the type of energy that tech companies Amazon and Microsoft use to power their cloud computing services.

Activists climbed atop the roof outside of Amazon’s new headquarters, and across the street from Microsoft offices, and rappelled off the roof displaying an 800 square foot cloud-shaped banner over the city’s rooftops. The message on the banner read “Amazon, Microsoft: How Clean is Your Cloud?”

“People want to use innovative devices and technology like the Kindle and Windows Phone without having to connect to a cloud powered by dirty and dangerous energy,” said Greenpeace International IT Analyst Casey Harrell. “Amazon and Microsoft have some of the brightest, most innovative engineers in the business. They have the potential to power their cloud with green, renewable energy, but are falling behind competitors Google, Facebook and Yahoo in the race to build a truly clean cloud.”

As more people around the world use the cloud to store and share photos, videos and documents, companies such as Amazon and Microsoft are building more data centers that house thousands of computers and consume tremendous amounts of electricity. The growth and scale of investment in the cloud is mind-blowing, with estimates of a 50-fold increase in the amount of digital information by 2020.1 On April 17, Greenpeace International released its report How Clean is Your Cloud?, which assessed 14 global cloud computing companies on their environmental performance in areas of transparency, energy efficiency, renewable energy investment and clean energy advocacy.

The report showed that both Amazon and Microsoft are powering a majority of their cloud infrastructure with dirty and dangerous coal and nuclear power. Neither company has a data center siting policy that gives preference to renewable energy like other industry peers. Amazon operates its cloud services in almost complete secrecy and refuses to give any information about the energy sources used to power its cloud.2

“Today’s protest kickstarts Greenpeace’s new global ‘Clean Our Cloud’ campaign,” stated Harrell. “We aim to mobilize millions of people around the globe who love the convenience and functionality of the cloud, but don’t want this great 21st-century technology to be powered by a 19th-century power source like coal.”

Greenpeace’s Clean Our Cloud campaign is calling on industry laggards Microsoft, Amazon and Apple to join the growing number of tech companies who are taking steps to power their clouds substantially with renewable energy. Yesterday, Greenpeace activists protested at the European headquarters of Apple, Microsoft and Amazon in Ireland, Turkey and Luxembourg, respectively.

In Seattle, activists wearing t-shirts and holding balloons with the twitter hashtag #cleancloud handed out leaflets addressed to Microsoft and Amazon employees. The aim of this protest is to highlight Amazon and Microsoft’s dirty energy problem and to communicate with employees the urgent need to clean our cloud.

Greenpeace is calling on Microsoft, Amazon, Apple and all IT companies with cloud services to: