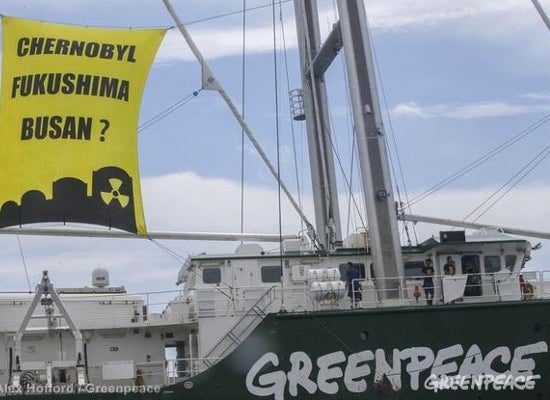 Earlier yesterday morning, other activists projected an image of a giant spreading crack onto the side of the plant to illustrate that French President Hollande, needs to shut down 20 nuclear reactors in the country by 2020 to keep his promise to cut nuclear power by 2025.

The projection of the crack is not false foreshadowing. Cracks have been found in the reactor vessels of several plants in France, and throughout the world.

In South Korea, Greenpeace has been hard at work drawing attention to the dangers of nuclear energy. Last Wednesday saw several climbers suspended from the Gwangan Bridge in Busan demonstrated that the Gori power plant poses a grave risk to the people living in its proximity.

Yesterday, the Rainbow Warrior could be seen from the same nuclear plant—the oldest facility in the country—with a very simple message printed on a banner stretched between her masts: CHERNOBYL, FUKUSHIMA, BUSAN? The simple message makes a strong statement: nuclear energy is neither safe, secure or even practical. 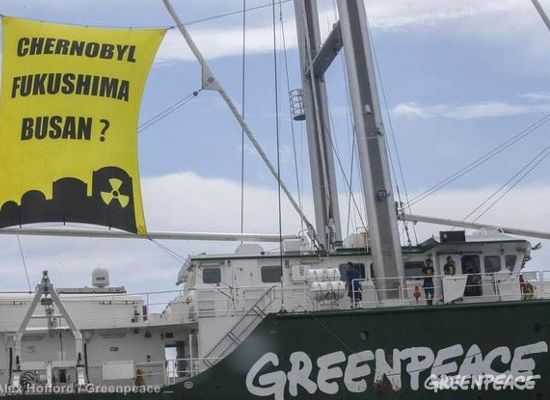 A report released last Thursday spells out not only the health risks associated with nuclear energy, but the economic impracticality of this kind of energy production as a whole. The report finds that facilities peaked a decade ago and have been in decline ever since. It begs the question, what’s the point of nuclear energy if demands can be met in a sustainable way?

Although the movement against nuclear power plants in France and South Korea happen to be focused on specific locations, the call to stop generating nuclear energy needs to be heard by everyone. Tricastin is representative of five others’ which are decrepit, riddled with cracks and are at high risk of serious accidents.

The Gori plant in Busan, another ticking time bomb, is indicative of a whole other set of problems besides the safety of the plants themselves. It represents the lack of transparency by the nuclear energy industry as it deftly clucks a narrative of efficiency and sustainability while stroking the backs of any policy-makers within reach. In the past few years the nuclear industry in South Korea has been riddled with corruption involving skirting regulation, faking certificates and forging warranties.

The collusion between state officials and nuclear energy mavens is seen as one of the causes of the Fukushima disaster. As former U.S. Nuclear Regulatory Commissioner, Peter Bradford, wrote, “For various reasons in many nations, the nuclear industry cannot tell the truth about its progress, its promise or its perils. Its backers in government and in academia do no better.”

There is something else that draws people out of their homes and onto the streets to protest against nuclear power, as they did in Guandong province, China, last week. As long as nuclear power wedges itself into the turnstile though which energy expenditure passes, we won’t be able to seriously talk about clean, safe and renewable power. The 37-billion Chinese yuan that would have gone to a uranium processing facility in the Longwan Industrial Park can be put towards a sustainable way to generate energy.

“The gap between nuclear rhetoric and nuclear reality has been a fundamental impediment to wise energy policy decisions for half a century now,” wrote Bradford.

Turning the last half-century around to wiser energy policy decisions shouldn’t be left to policy-makers, industry leaders or even the small group of French or South Koreans who shine a light on an increasingly dangerous industry. It is up to all of us to push nuclear energy off the table, for the health of ourselves and of our planet.