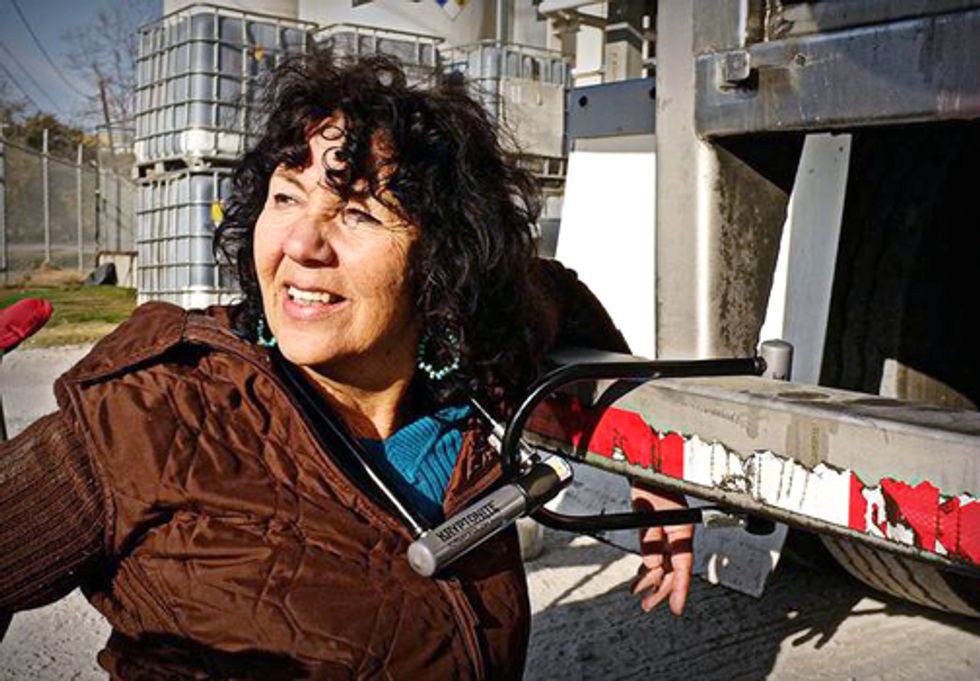 Longtime Gulf Coast activists Diane Wilson and Bob Lindsey Jr., locked their necks to oil tanker trucks destined for Valero’s Houston Refinery in solidarity with Tar Sands Blockade’s protests of TransCanada’s Keystone XL pipeline. Valero Energy Corp. is among the largest investors in TransCanada’s toxic tar sands pipeline that will terminate near the community of Manchester, located in the shadow of Valero’s refinery. Not only did Wilson and Lindsey blockaded the Valero refinery, the two lifelong friends have vowed to begin a sustained hunger strike demanding that Valero divest from Keystone XL and invest that money into the health and well-being of the people of Manchester.

Diane Wilson, who locked her neck to a tanker truck entering the Valero oil refinery, has been arrested for her heroic act. Houston Police and Fire Department cut the lock around her neck off with hydraulic ”jaws of life.” Community residents chanting nearby: “Arrest Valero! Pollution is a crime! Arrest Valero, Not Diane” and “Valero, Valero, what do you say? How much cancer did you cause today?”

With a 90 percent Latino population, Manchester’s relationship with the Valero refinery is a textbook case of environmental racism. Residents there have suffered through decades of premature deaths, cancers, asthma and other diseases attributable to the refinery emissions. With little financial support for lawsuits and without the political agency necessary to legislatively reign-in criminal polluters like Valero, the community suffers while Valero posts record profits.

Bob Lindsey Jr. has been arrested for locking himself to a truck entering the Valero refinery in the Manchester neighborhood in Houston.

“All my life the Gulf Coast has been an environmental sacrifice zone, and enough is enough,” declared Wilson, who spent over twenty years organizing to stop chemical plants from dumping toxins directly into Gulf waters. “Keystone XL will bring the dirtiest fuel on the planet right down to the Gulf, where already overburdened communities like Manchester will be forced to suffer even more. After decades of toxic air in Manchester, I refuse to just let them continue to punish this community. I won’t eat until Valero divests from Keystone XL.”

Wilson, a fourth-generation Gulf Coast shrimper, is no stranger to civil disobedience. After years of fighting industrial pollution in her hometown of Seadrift, TX, her willingness to use civil disobedience in the struggle for clean water and the successes it wrought for her community changed the landscape of environmental justice along the Gulf Coast.

Newly designated by the Waterkeeper Alliance as the San Antonio Bay Waterkeeper, Lindsey was born and raised in Calhoun County, which has highest rate of cancer of any county in TX. Lindsey also has a shrimping heritage stretching back five generations. His sister has had four episodes of cancer, and his father and nephew both died of rare disorders while in their forties. All of these diseases are traceable to the chemical facilities around which his family members lived and worked.

“Diane and Bob’s decision to hunger strike in protest of TransCanada’s Keystone XL and challenge Valero’s longstanding disregard for the health and safety of the people of Manchester pushes the boundaries of the Gulf Coast environmental movement yet again," explains Ramsey Sprague, a Louisiana Gulf Coast-born Tar Sands Blockade spokesperson. “Manchester deserves justice as do all communities treated as energy sacrifice zones. Corporations like Valero and TransCanada cannot seem to function without violating the health and safety of the people everywhere from Alberta to Manchester.”