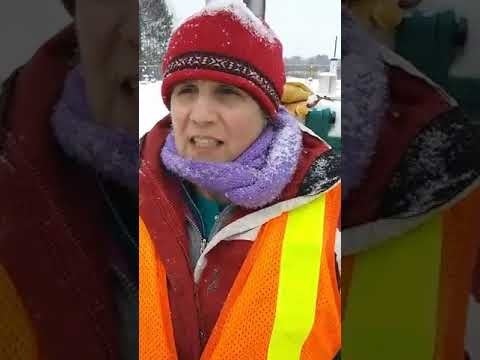 Four activists were arrested Monday after attempting to shut down an Enbridge pipeline near Grand Rapids, Minnesota, The Associated Press reported. The activists, who call themselves the Four Necessity Valve Turners and are affiliated with the Catholic Worker movement, said their actions were needed to address the urgent threat posed by climate change.

“The recent scientific study on climate change presented to the UN indicates that the threat of irreversible damage and destruction to our planet is imminent,” the activists wrote on their website. “Therefore, having exhausted all legal and political avenues, and having found those avenues lethally inadequate either to curb our dependency on fossil fuels or to stop its expansion, we find it necessary to take this direct action of turning off the flow of this poisonous tar sands oil.”

“We do not come in judgment. We too are in need of work with just wages. We are certain that if we shut the door to this destructive industry, we will open the door to clean energy industries that bring meaningful work that uplifts the common good.” #4Necessity #ValveTurners pic.twitter.com/LmAhD0ToyW

Michele Naar Obed, of Duluth, Minnesota; Allyson Polman, of Denton, Texas and Brenna Cussen Anglada and Daniel Yildirim of Cuba City, Wisconsin broke into a fenced-off area around noon on Monday that held shut-off valves for three Enbridge pipelines, their spokesperson Diane Leutgeb Monson told The Associated Press. After a period of prayer, they called Enbridge to inform them they would be turning off the company’s line 4 pipeline, prompting Enbridge to shut it off remotely. The activists were taken into custody by Itasca County sheriff’s deputies around 1:30 p.m.

“The actions taken to trespass on our facility and tamper with energy infrastructure were reckless and dangerous,” Enbridge spokesperson Juli Kellner said in an email reported by The Associated Press. “The people involved claimed to be protecting the environment, but they did the opposite. Their actions put themselves, first responders, neighboring communities and landowners at risk.”

The Enbridge pipelines targeted by the protesters carry crude oil from Alberta’s tar sands through Minnesota to Superior, Wisconsin. Their action also follows the controversial approval by the Minnesota Public Utilities Commission of a plan by Enbridge to replace its aging Line 3 pipeline. In addition to concerns over the need for more fossil fuel infrastructure, environmental and indigenous groups are worried about the risk of an oil spill close to land sacred to the Ojibwe.

This is a concern taken up by the valve turners as well.

“This act is step towards reparations for the damage that colonization has done both to the indigenous peoples of this continent and the land,” Cussen Anglada said in a press release.

The recent action follows on a similar attempt in 2016 to shut off Enbridge pipelines in Minnesota, which also prompted the company to shut off flow temporarily. The activists were allowed to present a “necessity defense” saying their actions were necessary to prevent climate change, but the judge ultimately dismissed charges in October 2018, as Minnesota Public Radio explained.