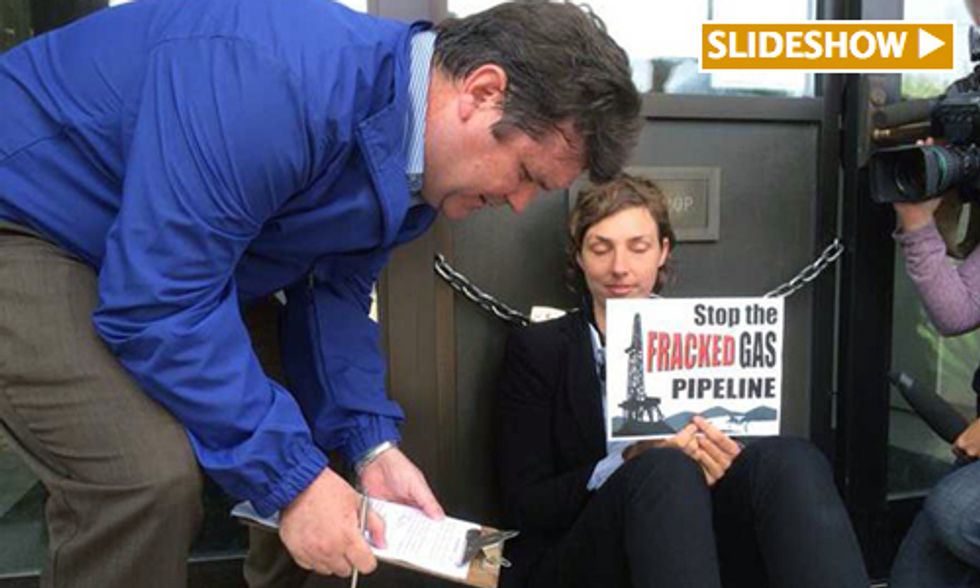 This morning climate justice activists blockaded the main entrance to the headquarters of Vermont Gas Systems demanding the company immediately cancel its plans to build a fracked gas pipeline. Vermont Gas is planning to build a three phase, 80+ mile pipeline that would transport fracked gas from Alberta, Canada through the Champlain Valley and underneath Lake Champlain to the International Paper pulp mill in Ticonderoga, NY.

"Today I'm taking action because Vermont Gas is intent upon shackling our communities to fossil fuels, and condemning us to irreversible climate change," said Sara Mehalick, a resident of Plainfield, VT, who has locked her neck to the main entrance of the building, blockading the doors shut.

"We have a responsibility to the communities whose land, water and air are being poisoned by fracking, and we're determined to make sure that this fracked gas pipeline does not move forward. Today we're here to tell Vermont Gas to cancel their construction plans, or expect to see growing resistance."

Police are on scene and a support rally has moved off the company's property.

"Climate change is already driving heat waves, torrential rains and flooding in the Northeast, which is only predicted to worsen in the coming years," said Jonathan Shapiro from Rising Tide Vermont. "In this context of mounting climate crisis, building new fossil fuel infrastructure is an exercise in complete lunacy and must be stopped."

The first phase of the Vermont Gas project is a 42-mile extension that runs through numerous wetlands and farms and Chittenden and Addison Counties. The pipeline was approved in December of 2013, despite several towns voting against the pipeline, and the Vermont Public Service Board, which issues permits for energy projects in the state, receiving more than 2,000 written comments against the pipeline.
Vermont Gas plans to start construction on June 1, but they are still waiting for additional permits from the Vermont Agency of Natural Resources. The entire project has been mired in controversy as Vermont Gas executives have deceived residents along the pipeline routes and surveyors have trespassed on land. The permitting process for the second phase, which would bring the pipeline underneath the Lake Champlain to International Paper, is ongoing and facing fierce state-wide opposition, according to Rising Tide Vermont.
Vermont Gas and Vermont Gov. Peter Shumlin claim the pipeline will reduce Vermont's greenhouse gas emissions, despite mounting evidence that burning fracked gas significantly contributes to climate change. Gov. Shumlin signed a fracking ban into law in 2012, yet supports the construction of this pipeline.