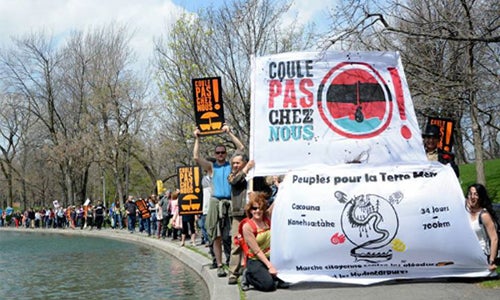 TransCanada’s hopes that its proposed Energy East pipeline to carry Alberta tar sands bitumen oil across the Canadian continent for export could escape the negative attention and backlash that has blocked its Keystone XL pipeline for more than six years appear to be dimming. 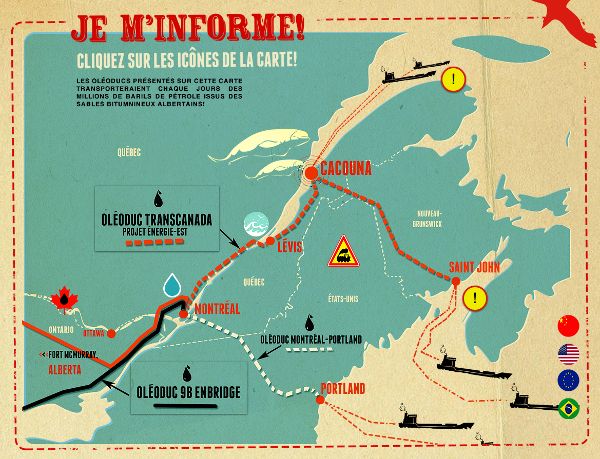 In French or English, whether you call it an “oléoduc” or a pipeline, it’s still carrying dirty tar sands oil a long distance. Image credit: Coule Pas Chez Nous

Those hopes got another setback this weekend. Canadian student activist/author Gabriel Nadeau-Dubois announced he was donating a $25,000 writing prize to Coule Pas Chez Nous (roughly translated as “Don’t Pump Near Us”), a coalition of anti-pipeline groups. He announced the donation on the Quebec talk show Toute le monde en parle Sunday after winning the Governor General’s Award for French-language nonfiction for Tenir tête his memoir of the 2012 Quebec student protests in which he was one of the leaders. He challenged viewers to match his donation, and he’s exceeded that tenfold, raising more than a quartet million dollars and counting in less than two days.

In 24 hours, @GNadeauDubois has raised a quarter of a million dollars to fight the #EnergyEast pipeline. #cdnpoli pic.twitter.com/LZXABWEMoT

“I decided to use it as an occasion to concretely help the citizens that are defending our collective interests today in Quebec,” he told Montreal’s CTV News. “It’s certain there will be a leak, there will be an accident. It’s unavoidable. It’s going to happen. So the question is, Are we ready to take that risk knowing that TransCanada is promising only 130 jobs in Quebec?”

That question will sound familiar to Keystone XL opponents who have long insisted that the promised jobs Keystone XL will create is a mere handful, while the damage to the environment could be enormous. Last week TransCanada CEO Russ Girling confirmed on ABC News that the number of permanent jobs would be around 50.

The Toronto Star reported yesterday  in a piece called “Anti-pipeline fervour not the legacy Stephen Harper had in mind” that the opposition this flood of donations represents is not an anomaly.

“This is only one small measure of how quickly Central Canada’s public opinion is gelling against the plan to link the Alberta oilfields to the refineries of eastern Canada,” said writer Chantal Hébert. “Once considered the pipeline bid most likely to succeed, TransCanada’s project is on the way to joining Enbridge’s Northern Gateway on the long shots list. According to a poll on Friday two thirds of Quebecers oppose Energy East.On that same day, the premiers of Ontario and Quebec put forward a list of provincial conditions that TransCanada would have to meet to secure their support.The fact that otherwise business-friendly provincial governments are putting more and more distance between themselves and the pipeline file is a sign that public opposition to these projects is fast spreading well beyond the environmental movement.” 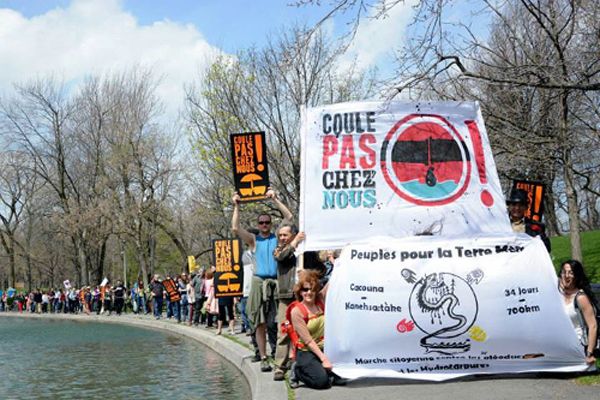 Perhaps that accounts for the extreme measures TransCanada has come up with to try to avoid the sort of flap that has stalled Keystone XL. It came to light last week in documents leaked by Greenpeace that the company has been working with Edelman, the world’s largest public relations firm and one with a climate denier history, to develop an aggressive pro-pipeline campaign based on creating fake “citizen” groups to support it and and digging into the backgrounds of pipeline opponents and organizations to find things to use to discredit them. One of the targeted groups, Equiterre, is a partner with Coule Pas Chez Nous in its anti-pipeline campaign, as is Greenpeace.