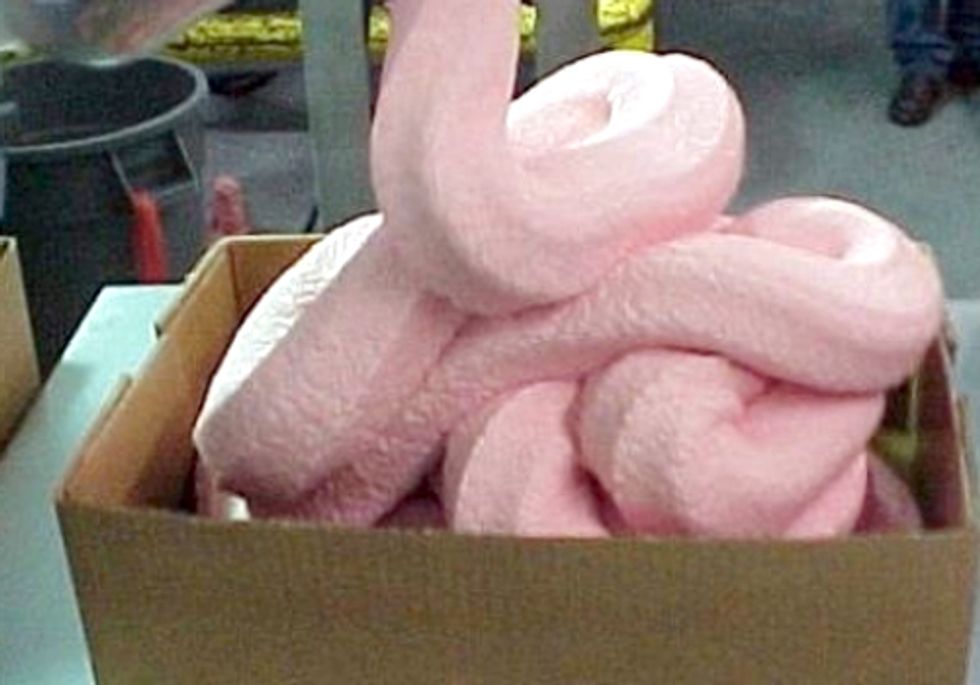 So-called pink slime is a beef-like product created by grinding together connective tissue and beef scraps normally used in dog food, and treated with ammonia hydroxide to kill salmonella and E. coli.

It is "not meat" according to a 35-year veteran U.S. Department of Agriculture (USDA) microbiologist,1 and was recently rejected by the likes of McDonalds, Taco Bell and Burger King.2 So it's pretty disturbing that the USDA continues feeding this stuff to kids, and plans to buy seven million pounds of it for school lunches.

In an all too familiar story, despite concerns raised by USDA inspectors and minimal safety inspections, the USDA approval of Beef Products Incorporated's "Lean Beef Trimmings" was pushed through by USDA undersecretary JoAnne Smith, a George H.W. Bush appointee and former president of the National Cattleman's Association.

The USDA allows beef products like hamburgers to contain up to 15 percent of the Ammonia-treated, meat-ish stuff, but inadequate labeling requirements prevent parents from knowing if it's included in the meat being served at their kids' school.

Aside from the lack of nutritional value, pink slime raises a number of health and safety concerns. The New York Times exposed in 2009 that despite being treated with ammonia, three E. coli contaminations and four dozen salmonella contaminations occurred between 2005 and 2009, during which time school lunch officials temporarily banned hamburger makers from using pink slime from one facility in Kansas three times.3

Ammonium hydroxide is harmful to eat by itself, and can potentially turn into ammonium nitrate, a common ingredient in home made explosives.

Kids need nutritious food to be able to learn in school, and many of the tens of millions of kids who rely on school lunches come from low income families where they are less likely to get a healthy diet. While pink slime is a nutritionally inferior and potentially risky product, the school lunch program saves only three cents per pound of ground beef by continuing to put this filler in kids hamburgers.4

Over the past few months, numerous fast-food chains have rejected the product and say they no longer use it. School lunch officials should clearly follow suit.

Sign our petition to keep 'pink slime' out of school cafeterias today by clicking here.