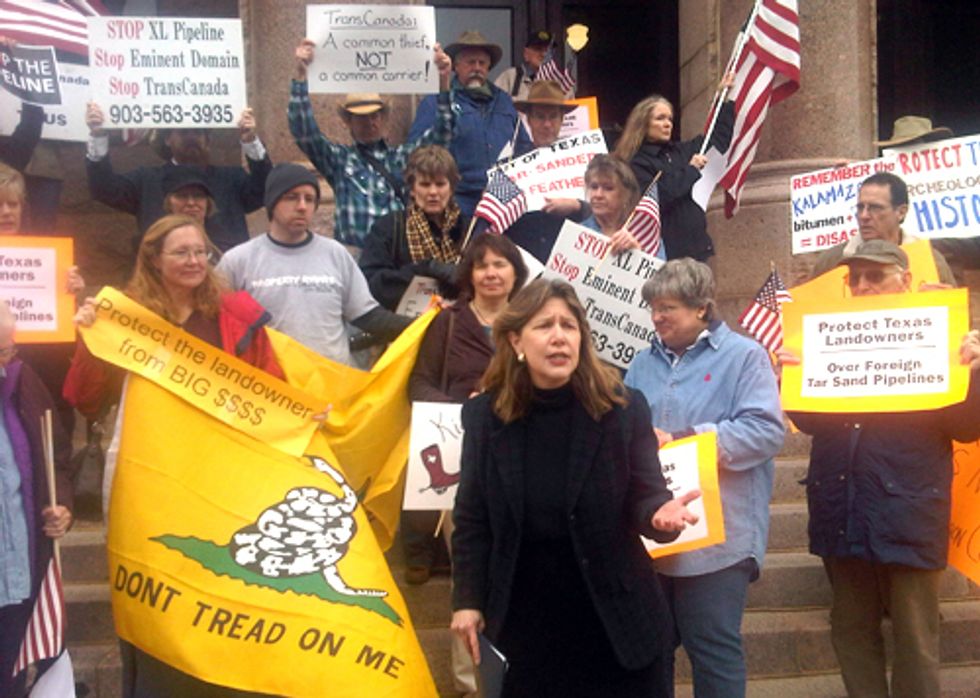 The arrogance of TransCanada is shocking, even for an oil company.

The company is threatening to seize the property of American landowners and start construction of its Keystone XL pipeline—even though President Obama last month rejected the permit to build.

The pipeline path includes the 600 acre working farm that Julia Trigg Crawford's grandfather bought in 1948, on the Texas Oklahoma border, where the Red River meets Bois d'Arc Creek, which waters the farm.

Fearing for the safety of her farm and it's water source, Julia Trigg rejected TransCanada's offer to buy an easement on her land.

TransCanada announced it was seizing her land under eminent domain and would begin digging, but Julia won a temporary restraining order,1 at least until Feb. 24, when the court will hear the case challenging Transcanada's status as a "common carrier" under Texas law.

It's bad enough that TransCanada expect landowners like Julia Trigg to accept permanent damage to their land and possible oil spills. But it's beyond arrogant for this foreign oil company to trample on private property rights and start construction on a project whose permit has just been denied.

Under eminent domain, the government can force landowners to accept monetary payment for the use of their land for certain public-good projects like highways and railroads.

Of course, TransCanada's massive fuse to the carbon bomb of the tar sands shouldn't qualify as one of these projects—it does great harm and only helps the profits of a foreign corporation. But regardless, the company doesn't even have the permit to build it, because the White House just rejected their application. But that hasn't stopped TransCanada.

According to The New York Times, the company has at least 34 eminent domain actions against landowners in Texas, and 22 in South Dakota.2 And their threats to landowners in Nebraska3 helped spark massive public opposition and a special legislative session that were key in the decision to consider a different route.

Many of these landowners are being sued by the company, and told that if they don't take the small monetary offering—sometimes less than $10,000 in exchange for the permanent damage to their land, and huge risk of spills—their land will be condemned and TransCanada will seize the easement.

Julia Trigg and others are fighting back and doing everything they can to oppose TransCanada's land grab.

Everyone from environmentalists to Tea Partiers in Texas are showing their support for Americans' property rights.4 As these court challenges unfold, we need to build pressure against TransCanada and spread the word about their reprehensible tactics.