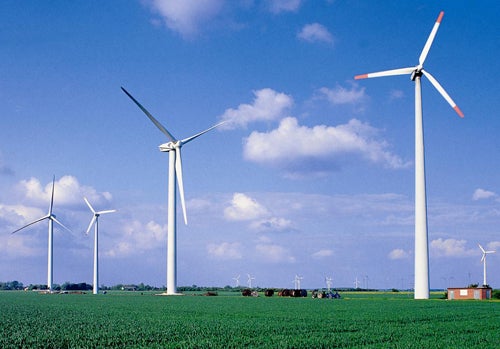 EcoWatch has been reporting on the need for Congress to renew the production tax credit (PTC) for renewable energy since the launch of its news service in October. Unfortunately, in the wake of the now-expired advanced energy manufacturing tax credits, Treasury grants, and the Department of Energy’s loan guarantee programs, as well as the upcoming expiration at year’s end for the production tax credit for wind, America’s clean energy sector faces an uncertain future.

This week, organizations including the Sierra Club, American Wind Energy Association and The Pew Charitable Trusts are asking Americans to contact their elected officials and encourage them to renew the wind energy PTC and protect tens of thousands of green jobs.

Today, the Sierra Club launched a new series of high saturation television, radio and online ads, highlighting Republicans who have failed to act to renew the PTC for wind energy. The cable television and radio ads will run in the eastern NH, Scranton, PA and Las Vegas, NV media markets throughout the next three weeks.

The wind industry currently supports more than 75,000 jobs across the country, but if the PTC is not renewed by the end of the year, as many as half of these jobs could be lost. Already, layoffs have been announced in manufacturing facilities in Pennsylvania and new wind installations have been delayed due to uncertainty around the PTC’s fate.

“With Americans working hard to make ends meet during this tough economy, 37,000 pink slips is the last thing working families need,” said Michael Brune, executive director of the Sierra Club. “Manufacturing and wind installation jobs are at risk in states like New Hampshire, Pennsylvania and Nevada and Congress must act now to renew the production tax credit and protect American workers.”

Wind power has quickly become one of the most important energy sources for the country. Wind power already supplies 25 percent more electricity to Americans than it did a year ago. States like Iowa and South Dakota generate 20 percent of their electricity from wind power, and the wind industry is on track to produce 20 percent of America’s electricity by 2030. More than 400 American manufacturing plants build wind components, and more than 60 percent of a U.S.-installed turbine’s value is produced right here in America.

“Republicans in the House have the chance to be job creators, but they are just sitting by as jobs in the wind industry are being lost,” said Brune. “As our ads say, ‘Maybe they don’t care.’ It’s time for Rep. Barletta, Rep. Guinta and Rep. Heck to support American workers and stand up for American jobs by renewing the PTC this summer.”

According to the American Wind Energy Association, yesterday, Senators Bennet (D-CO) and Moran (R-KS) introduced an amendment to the Small Business Jobs and Tax Relief Act, S. 2237, that would extend the renewable energy PTC as well as the Investment Tax Credit (ITC) for two years.

The main challenge has been to get our Senators to bring the PTC up for a vote. We now have a window of opportunity to see that vote through. To make it happen, we need Congress to support the PTC amendment to the small business bill.

E-mail and call your senators today and deliver this message: “I urge you to cosponsor and support Amendment 2520 to extend the renewable energy production tax credit.”

In the race to secure private clean energy finance and investment, the U.S. reclaimed the top spot, after trailing China since 2009, according to new research published by The Pew Charitable Trusts.

However, America will be hard-pressed to sustain last year’s success. Intermittent policies hurt the ability of the U.S. to consistently compete and turn clean energy innovation into manufacturing, deployment and export opportunities. Transparent, lasting and consistent policies such as the PTC remain a critical signal to private investors.

The Pew Charitable Trusts encourages you to ask Congress to extend the PTC for clean wind power immediately and help keep the U.S. number one in the clean energy race.

Thanks to the Sierra Club, American Wind Energy Association and Pew Charitable Trusts for their continued effort in bringing this issue to the forefront.