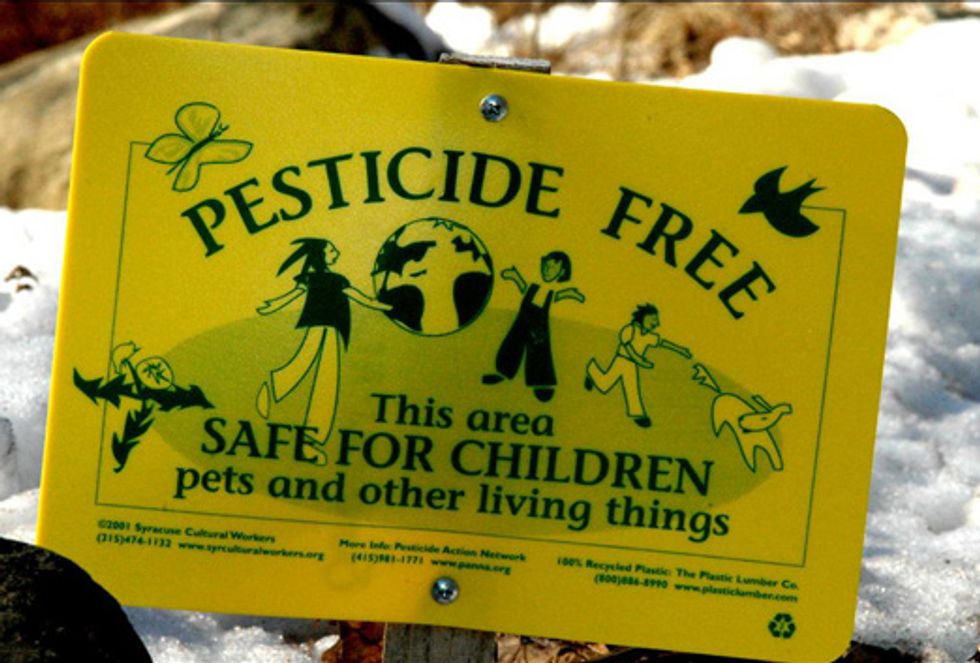 A group of U.S. Senators has drafted and sent a letter to the offices of Senate Majority Leader Harry Reid (D-NV) and Minority Leader Mitch McConnell (R-KY) in an attempt to convince them to set aside time in the Senate schedule for consideration of the Reducing Regulatory Burdens Act of 2011, H.R. 872.

Action is needed to show Sens. Reid and McConnell that the public does not want this bill and that pesticides should not be exempted from critical safety and environmental protections. Consideration of this bill would take valuable time out of the Senate’s schedule to debate a bill that would weaken important policies that protect human health and the natural environment.

The letter, dated Dec. 8, aims to communicate a sense of bipartisan agreement that the issue should move forward. It was drafted by Sens. Mike Crapo (R-ID) and Kay Hagan (D-NC) and was signed by 13 other Republicans and 10 other Democrats. However, despite this apparent bipartisan support, many Senators have expressed serious concern regarding the effects that would result from passage of the bill.

Your help is needed. Call the offices of Sens. Reid and McConnell today and tell them that you do not want the application of pesticides to be exempted from common sense health and environmental review and that the Senate should not be spending time to consider weakening protections for public health and safety. Here are the phone numbers for the senators’ Washington, D.C. offices:

When you speak with the senators’ legislative aides, consider these points in communicating your message:

The so-called “Reducing Regulatory Burdens Act of 2011,” would ensure that Clean Water Act (CWA) permits are not required for the application of pesticides. The bill states, “A permit shall not be required by the administrator or a state under [the Clean Water Act] for a discharge from a point source into navigable waters of a pesticide authorized for sale, distribution, or use under the Federal Insecticide, Fungicide, and Rodenticide Act (FIFRA), or the residue of such a pesticide, resulting from the application of such pesticide.”

FIFRA and CWA are complementary laws. The two statutes have fundamentally different standards and methods in determining whether a pesticide will have unreasonable adverse effects on the environment and/or human health. The CWA statute is more stringent than FIFRA. CWA has a “zero discharge” standard, meaning any amount of discharge, no matter how small, without a permit, constitutes a violation of the CWA. Risk assessment, on the other hand, used under FIFRA, is weaker than a “zero harm” standard. Risk/benefit allows a certain amount of pollution (i.e. risk) in exchange for controversial calculations of benefit and use a threshold of harm that can vary upon EPA discretion. Since the CWA statute is more stringent in its oversight of U.S. waterways, FIFRA should not be allowed to override the CWA.

In March 2011, HR 872 passed the U.S. House of Representatives by a vote of 292-130. The bill, introduced by Rep. Bob Gibbs (R-OH), seeks to amended FIFRA and CWA to eliminate provisions requiring pesticide applicators to obtain a permit to allow pesticides or their residues to enter waterways. It would reverse a 2009 Sixth Circuit court decision which ruled that, under FIFRA and CWA, U.S. Environmental Protection Agency (EPA) must require such permits.

EPA first proposed draft language in June 2010 for a Pesticide General Permit (PGP) in response to the court ruling. Its decision to issue a permit stems from the 2009 court decision in the case of the National Cotton Council et al. v. EPA in which the 6th Circuit Court of Appeals ruled that pesticide discharges into water are pollutants and require CWA permits. This ruling overturned the Bush administration policy that exempted pesticides from regulation under the CWA, and instead applied the less protective standards of FIFRA. CWA uses a kind of health-based standard known as maximum contamination levels to protect waterways and requires permits when chemicals are directly deposited into rivers, lakes and streams, while FIFRA uses a highly generalized risk assessment that does not consider safer alternatives.

The PGP went into effect in November, when negotiations for a compromise bill in the Senate broke down.

EPA will issue permits in territories, Indian Country Lands, six states, and the District of Columbia where the agency is the NPDES permitting authority. EPA is working closely with the other 44 states as they develop their own permit regulations. The PGP does not authorize coverage for discharges of pesticides or their degradates to waters already impaired by these specific pesticides or degradates or discharges to outstanding national resource waters. These discharges will require coverage under the individual NPDES permits, rather than a general permit. Also outside the scope of this permit are terrestrial applications to control pests on agricultural crops or forest floors. Irrigation return flows and agricultural stormwater runoff do not require NPDES permits, even when they contain pesticides or pesticide residues, as the CWA specifically exempts these categories of discharges from requiring NPDES permit coverage.