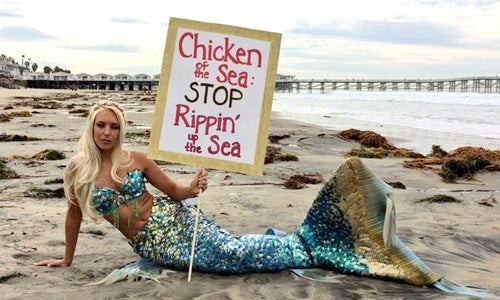 Hannah Fraser, acclaimed mermaid performance artist and ocean activist, joined Greenpeace at Chicken of the Sea’s San Diego headquarters today to demand that the company stop greenwashing its record on ocean sustainability. Despite its sustainability claims, the company uses fishing methods that unnecessarily kill marine life and its owner, Thai Union Group, has been implicated in significant human rights abuses and forced labor at sea.

“Chicken of the Sea has worked hard to greenwash its image with a majestic mermaid mascot that appeals to children and families across the country,” said Fraser. “I came to San Diego to inform people who buy tuna about this company’s record of ocean destruction. The families I have talked with are outraged to learn that Chicken of the Sea uses fishing methods that needlessly kill sharks, turtles, seabirds and other marine life.”

Outside of Chicken of the Sea headquarters, Fraser wore her mermaid tail and used a megaphone to demand a response from the company’s CEO. The activist held a sign urging Chicken of the Sea to “stop rippin’ up the sea,” and helped deliver 80,000 petition signatures and photos from concerned customers demanding better tuna. Prior to visiting the company, Fraser went to a popular location in San Diego’s Pacific Beach to speak directly with customers.

.@COSMermaid's jingle says “Ask any mermaid you happen to see…” but this isn’t just any mermaid! #NotJustTuna pic.twitter.com/USz5bLUIPt

Today’s protest in San Diego coincides with others around the globe. The coordinated efforts are mounting pressure against Thai Union and its brands to make meaningful changes that protect the oceans and industry workers. Recent New York Times and Associated Press investigations have connected Thai Union seafood supply chains to human rights abuses and forced labor. Following the launch of Greenpeace’s global campaign on Thai Union earlier this month, the company has announced baby steps that would address a small fraction of the issues in its supply chains.

“Chicken of the Sea continues to ignore its customers who want to know they’re buying sustainable and ethical products for their families,” said Greenpeace Oceans Campaigner Kate Melges. “Empty promises on sustainability and minimal efforts to address labor issues will no longer cut it. Chicken of the Sea needs to step up as a leader or make room for tuna companies that protect workers and the ocean.”

Greenpeace also recently crowdsourced three billboards with a parody logo that will go up in locations throughout San Diego on Nov. 2, including one directly across from the Chicken of the Sea headquarters. On Oct. 15, labor unions representing nearly 5 million urged Thai Union and Chicken of the Sea to reform their social and environmental practices. Greenpeace plans to continue to put pressure on the tuna companies until they meets basic standards for sustainability and human rights.

Greenpeace: The Truth Behind the World’s Largest Tuna Company