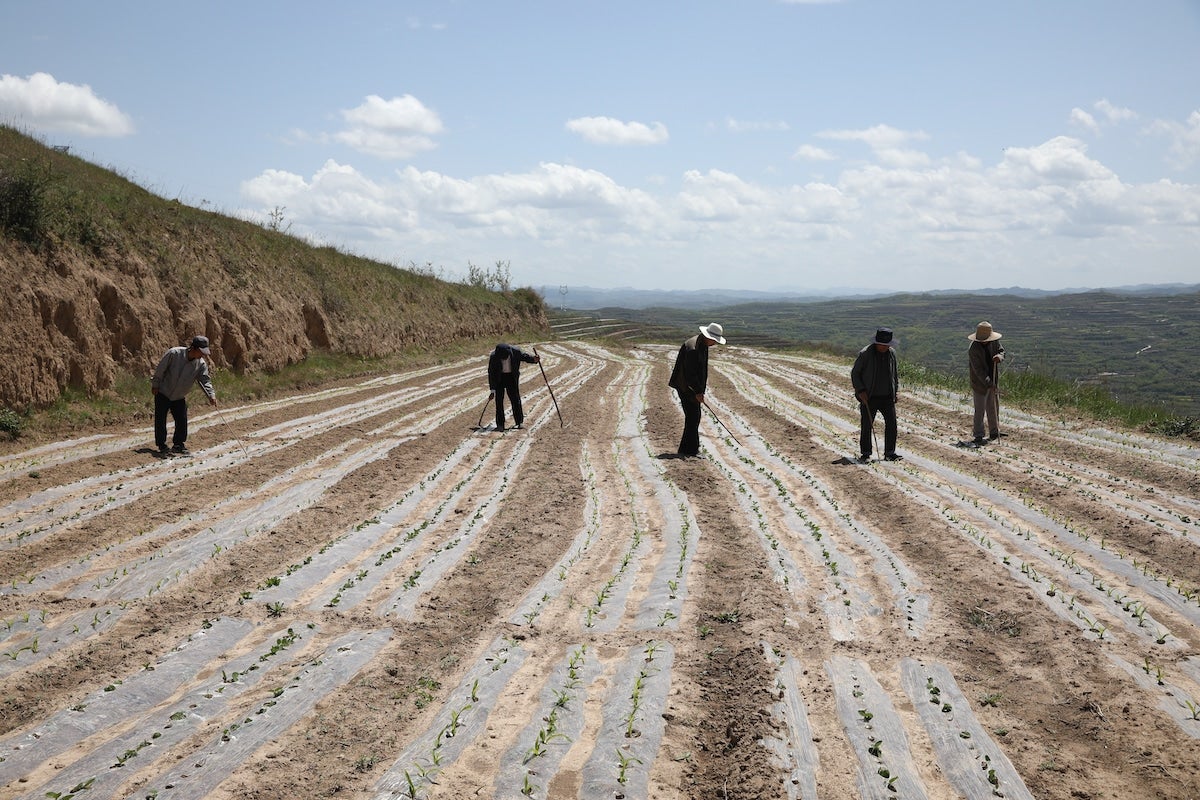 Farmers work in fields of reclaimed farmland in the Qinzhou District of Tianshui, northwest China's Gansu Province on May 11, 2022. Wang Zixuan / Xinhua via Getty Images

Increasingly, farmers around the world are moving into urban centers in an act called “rural outmigration,” leaving hundreds of millions of acres of land to be reclaimed by the Earth. The farmers abandon their croplands for various reasons having to do with finances, conflicts or climate change, but, whatever the catalyst, the abandonment of former farmland means an opportunity for ecological restoration and carbon sequestration that could lead to a positive impact on the climate crisis — if the land is allowed to regenerate.

In a new study, researchers found that croplands are unlikely to be allowed to rejuvenate on a large enough scale to be impactful unless lawmakers intervene, since much of the land will end up being recultivated, The Hill reported.

“As people move from rural areas into cities, there is a chance for wildlife and the climate to gain ground — literally — as abandoned farms and pastures revert back to forests and grasslands,” said David Wilcove, professor of ecology and evolutionary biology and public affairs at the High Meadows Environmental Institute, one of the co-authors of the study, as a press release from the Princeton School of Public and International Affairs reported. “Our work shows that this is not happening because the ‘abandoned’ lands are being rapidly recultivated.”

In the study’s findings, “Rural Land Abandonment Is Too Ephemeral to Provide Major Benefits for Biodiversity and Climate,” researchers call for policy interventions to ensure that habitat restoration happens on former farmland so that the planet can reap the benefits of nature’s natural balancing process. The paper was published Wednesday in the journal Science Advances.

“Unless countries and policymakers develop better regulations and incentives to allow these lands to recover, this chance to restore ecosystems will not be fully realized,” said Ph.D. candidate at Princeton University’s School of Public and International Affairs Christopher Crawford, who was lead author of the study, as The Hill reported. “It will remain a missed opportunity to fight climate change and biodiversity loss.”

The possibility for environmental benefits from the abandonment of former farmland is dependent not only on how much is abandoned, but how long it remains uncultivated, explained the Princeton press release.

The researchers found that, after keeping track of the abandonment and recultivation of cropland at 11 sites over four continents by using yearly land-cover maps put together using satellite imagery from 1987 to 2017, much of the land ended up being recultivated within 14.22 years, a period of time not long enough to allow the former cropland to become a haven for a significant amount of wildlife or for it to capture a considerable amount of carbon.

Locations included those abandoned for various reasons — including socioeconomic and environmental factors, as well as conflict and war — in Brazil, Bosnia and Herzegovina, Iraq, China, Kazakhstan, Belarus, the United States and Russia.

The researchers predicted that, at most of the studied sites, about 50 percent of the abandoned farmland would end up being recultivated in 30 years or less.

“Without incentives for restoration, cropland abandonment rarely lasts long enough to yield benefits for biodiversity or carbon sequestration. For abandoned croplands to reach levels of carbon stocks and biodiversity comparable to more intact natural ecosystems, they typically need at least 50 years of regeneration,” said Crawford, according to the press release.

When the abandoned farmland was cultivated, it led to a 35 percent reduction in carbon capture by 2017, the study showed.

The land that had the greatest recultivation levels was in the former Soviet Union, while land remained uncultivated a little while longer in the Shaanxi and Shanxi provinces of China, the press release said, possibly due to the “Grain for Green Program” there, which gives financial incentives for cropland reforestation.

The study’s authors suggested that fields of former cropland, especially those that were not needed for food production, be transformed into safe havens for wildlife. This could be facilitated by offering financial incentives to landowners to allow the reclamation of their croplands. Supporting long-term sustainable cultivation was also suggested as a possibility for some sites.

“Unless policymakers take steps to reduce recultivation or provide incentives for regeneration, abandonment will remain a missed opportunity to reduce biodiversity loss and climate change,” the paper said.