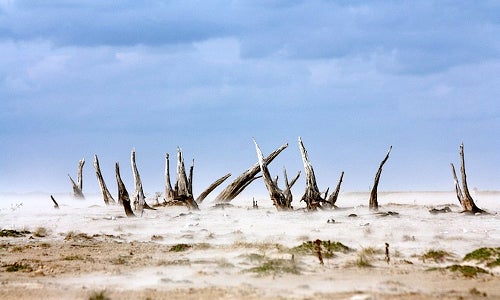 Gary Cheatwood grew up near the town of Cuthand, in far northeast Texas, and he always found peace along the wooded banks of Little Mustang Creek. His grandfather had bought 100 acres in 1917 and now Gary’s family owns 600 acres of bottomland near where the creek’s clear waters meet the Sulphur River. He especially loves the woods around the creek—some 70 species of hardwood trees, including a massive Texas honey locust that ranks as official state champion. “This forest is not making money,” says Cheatwood, a retired surveyor and construction manager. “But a lot of things are more important than money. The trees give me pleasure.”

Everything about the land pleases Cheatwood. Still wiry and lean at 75, he walks it every week, always wearing his standard outfit of lace-up work boots, jeans, plaid flannel shirt, and baseball cap. He collects finely crafted Caddo and Cherokee Indian arrowheads. In the spring, blue and yellow wildflowers bloom. He takes pleasure, too, in looking for rare creatures—the American burying beetle, a certain obscure shrew, even the eastern timber rattlesnake. 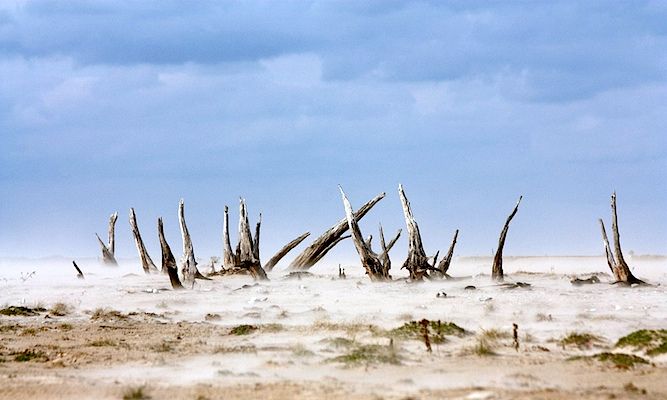 Sand blows on the shores of Lake Whitney, south of Fort Worth, TX, in 2011. During the drought that year water reserves in Texas dropped by 62.3 billion cubic meters. Photo credit: Flickr/ Creative Commons

Yet as he stood on the creek bank this January, he knew his family could have their homestead taken by the state of Texas. If Texas Water Development Board planners have their way, sometime in the next 20 years or so Cheatwood’s land will disappear under Marvin Nichols Reservoir, a proposed 72,000-acre lake meant to provide water to the Dallas-Ft. Worth “Metroplex” 135 miles to the west. Some 4,000 of his neighbors (a few estimates go as high as 10,000 people) will also become refugees, driven off their lands, either for lake bottom or for the hundreds of thousands of acres to be taken as “mitigation.”

All over rural Texas, large swaths of farmland and ranchland and coastal estuaries face a similarly precarious future. A convergence of extended drought, supply-side water policy, and relentless economic and population growth has led to bitter fights over how water is to be used.

The current drought began in 2006 and, with the exception of occasional years of what was once considered near-normal rain, has never really gone away. By far the state’s greatest climatic trauma occurred in 2011, when a full 85 percent of the state qualified as suffering from “exceptional drought,” the most severe category listed by the U.S. Drought Monitor. Hot, dry winds blew across the state from early spring through the summer and fall. For weeks temperatures ranged well over 100 degrees, and reached 110 degrees in places. Texas dried out so much that it literally caught fire: 31,453 wildfires burned more than 6,000 square miles. Gary Cheatwood’s tiny Cuthand Volunteer Fire Department fought 18 blazes by itself and cooperated with other agencies in fighting dozens more. “We were afraid to leave our homes to get groceries,” Cheatwood says. “If we weren’t at home when the fires came, no one could call for help.” An estimated 300 million trees died from lack of water. People bought feed to keep birds and deer alive. Reservoirs in West Texas ran dry.

Three years later, drought still prevails in 70 percent of the state. And although a predicted El Niño will, hopefully, bring rains, people still fear that the extended drought might become permanent, the new normal. But rather than recognizing the state’s erratic rains and limited water supplies—and recommending dramatic conservation measures—the Texas state water plan calls for building more dams and pipelines and drilling more aquifers to bring water to the growing cities.

Meanwhile, the Texas establishment, aroused by the recent oil and gas industry boom, predicts an 82 percent population increase in the next 50 years, leading to a state with 46 million residents. Austin, Dallas, San Antonio and Houston rank among the 20 fastest growing cities in the country. All these people coming to Texas will need water.

Texas cities are trying to grab water from the state’s rural areas, using the state’s existing planning process that for decades has favored urban/suburban development. If the cities succeed, they will inflict terrible damages on the environment and the ranching and agriculture that sustain rural communities. Along the Colorado River south of Austin, rice farmers near the town of Eagle Lake, whose land has been in production since 1893, may lose vital irrigation water. The rare, endangered whooping cranes that spend winters in the Aransas National Wildlife Refuge near the town of Rockport could die from lack of freshwater. Already one major die-off has occurred. In the winter of 2008-2009, at least 23 of 270 cranes died because Texas managers took too much water from the Guadalupe River and didn’t leave enough flowing into the bay to keep it brackish enough for the cranes’ food—the blue crab—to survive.

To many Texans living in the state’s large cities, places like Cuthand, Eagle Lake and Rockport are invisible—neither the cow towns imagined from Western movies nor contemporary urban sprawls. Instead, they are farming areas or coastal fishing villages. In Cuthand, families pass their acreage down to their children, and almost everyone works a second job to keep the farm or ranch going. In Eagle Lake, farmers harvest rice and supplement their incomes by working as guides for duck and geese hunters who lease their flooded rice paddies.

The state’s growth machine—summed up by Gov. Rick Perry’s (R-TX) ad campaign, “Texas Wide Open for Business”—sees these places as expendable. But the people who live in these sacrifice zones, along with Texas environmentalists, aren’t willing to go away quietly. They are fighting back to protect their lands, water and the state’s wildlife—what they collectively call their heritage. Rural residents and their environmental allies are vastly outnumbered and outfunded, but they are mobilizing for a long conflict. Their various local fights may buy time for Texas to create an alternative water paradigm, another path to the future in the increasingly volatile climatic era ahead.

Gary Cheatwood joined the Sulphur Oversight Society (SOS) in 2003, when he learned that the Dallas-Ft. Worth area had moved forward longstanding claims to the river as the site for a dam. A Cuthand area rancher, Shirley Shumake, founded SOS with a handful of other locals to sound the alarm. Armed with contour maps that traced the footprint of the proposed reservoir, they contacted everyone who might lose their land. Within a few years SOS grew to hundreds of members—a big number for a sparsely populated region—and garnered 8,000 signatures for a petition to the Texas State Water Board protesting the reservoir.

Shumake and Cheatwood’s group, joined by a local timber company, filed a lawsuit against the Texas Water Development Board (TWDB), claiming the state’s plan for Marvin Nichols Reservoir violated Texas state water laws protecting agricultural and natural resources. SOS won, and again won an appeals hearing. But then the TWDB attempted an end run around the courts and is now seeking to put Marvin Nichols Reservoir into a regional water plan. “The board just went ahead and did what they wanted to do,” Shumake said. Cheatwood sighed, “We got the weight of the Texas Water Board on us now. We’ll have Marvin Nichols hanging over us forever. It’s not right. People down here feel like they’ve been run over.”