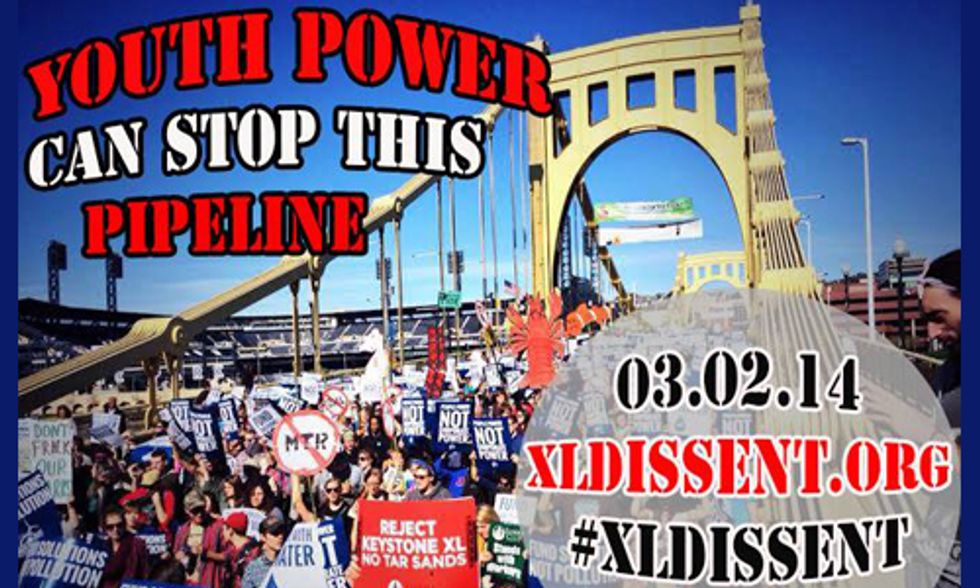 On Sunday, March 2, at 22-years-old, I will take part in a nonviolent for civil disobedience campaign along with nearly 500 other college students in our nation's capital and very will likely be arrested. Why would I and others risk arrest without our degrees yet in hand? Aren't we worried about jobs and employment? The short answers to those questions are to stop the Keystone XL pipeline and no.

The long answers take a bit more time to explain.

In a Rolling Stone article that has been viewed by millions and referenced in thousands of news articles, Bill McKibben, founder of 350.org, highlighted three numbers: 2 degrees Celsius, 565 gigatons, and 2,795 gigatons. The sustainability tipping point temperature increase, the amount of carbon dioxide (CO2) we can emit without passing that point and the current estimates of fossil fuel company reserves, respectively.

This article helped launch the Do The Math tour, which today calls for colleges and universities to divest their endowment fund holdings from the fossil fuel industry whose emissions have been largely responsible for climate change. The best example of a successful divestment campaign was during Apartheid when 155 colleges and universities pulled their endowment holdings from companies doing business with and operating in South Africa, hoping to cause enough financial and political pressure to collapse the industry—and it worked.

The fight to stop the Keystone XL is pivotal to the divestment campaign. This pipeline would shoot about 800,000 barrels of tar sands crude oil per day from Alberta's Tar Sands extraction site in Alberta, Canada to Port Arthur, Texas. It would produce as much carbon dioxide as seven coal-fired power plants, provide only 35 permanent jobs and be shipped overseas to China to sell on the global market. Crossing through the heart of America's cropland, its construction would decimate sacred territories of Native Americans. Van Jones, founder of Rebuild The Dream, a 21st century think tank hoping to fix the U.S. economy, says if President Obama thinks this pipeline will be as great as they say, he should be willing to name it The Obama Tar Sands Pipeline.

In 2008, Barack Obama was elected president of the U.S. Breaking racial barriers and social stigmas, he was the first African American to be elected into the White House. In his 2008 inauguration speech, he said: "We will respond to the threat of climate change, knowing that the failure to do so would betray our children and future generations." Newly involved environmental activists cheered into their television screens and toasted his words with glasses of beer.

Despite what he said, President Obama has already fast-tracked approval of the southern leg of Keystone XL (which is currently operational) and is close to approving the northern leg. At Georgetown University in June of 2013, President Obama gave another speech at which he said: "Allowing the Keystone pipeline to be built requires a finding that doing so would be in our nation's interest ... and our national interest will be served only if this project does not significantly exacerbate the problem of carbon pollution."

James Hansen, formerly of NASA, has called the production of this pipeline "game over for the climate." However, the recent State Department Final Supplemental Environmental Impact Statement states the pipeline will not significantly increase emissions. Interestingly, James Hansen left NASA last year in order to speak more openly about his concerns regarding climate change.

Young self-proclaimed environmentalists such as myself are risking arrest to stop this pipeline in an action named XL Dissent. But we're not alone. Business, economics, geoscience, philosophy, english and history majors all stand with us. This isn't just environmental students. This is students from all over the country standing up and saying "No Keystone XL Pipeline," because we want a livable future. We want clean water and clean air. We're doing this for future generations because we want them to live a life like the one we've enjoyed. We want them to live in an economically, socially and environmentally sustainable world.