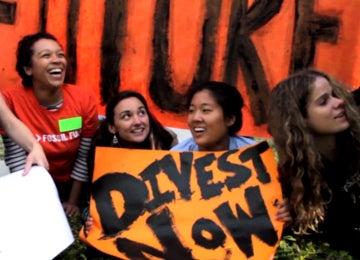 A global movement is uniting to challenge the fossil fuel industry in a fight for the planet and our future and students across the country are leading the way.

$hift aims to mobilize people to join the divestment movement that is sweeping the nation, exposing divestment from the fossil fuel industry as a practical solution for creating the systemic change that is necessary to sustain a livable planet. This short film by Jamie Oliveira, Jennifer Fong, Seth Hahn and Nicole Blunt, in cooperation with San Francisco State University’s Health Equity Institute and Fossil Free SFSU, documents the stories, ideas and actions behind groups like Fossil Free SFSU, 350.org, 350 Bay Area, Fossil Free SF and other divestment campaigns, uncovering the truth about climate change and revealing the case for divestment.

Scientists estimate we can only emit 565 more gigatons of carbon into the atmosphere to sustain a livable planet. Fossil fuel companies currently have enough coal, oil and gas reserves to emit 2795 more gigatons of carbon. That’s five times the livable amount. If we want to avoid disastrous consequences of climate change, we have to leave 80 percent of those reserves in the ground.

If it is wrong to wreck the climate, then it is wrong to profit from that wreckage. We believe that educational and religious institutions, city and state governments, and other institutions that serve the public good should divest from fossil fuels.

We want institutions to immediately freeze any new investment in fossil fuel companies, and divest from direct ownership and any commingled funds that include fossil fuel public equities and corporate bonds within five years. Two hundred publicly-traded companies hold the vast majority of the world’s proven coal, oil and gas reserves and they are the companies we’re asking our institutions to divest from.

Our demands to these companies are simple, because they reflect the stark truth of climate science:

This documentary takes a look at climate change as a social justice issue and exposes divestment as a practical solution for creating the systemic change that is necessary if we want to truly $hift our behavior and sustain a livable planet.