A New Chapter in the Fight against Keystone XL 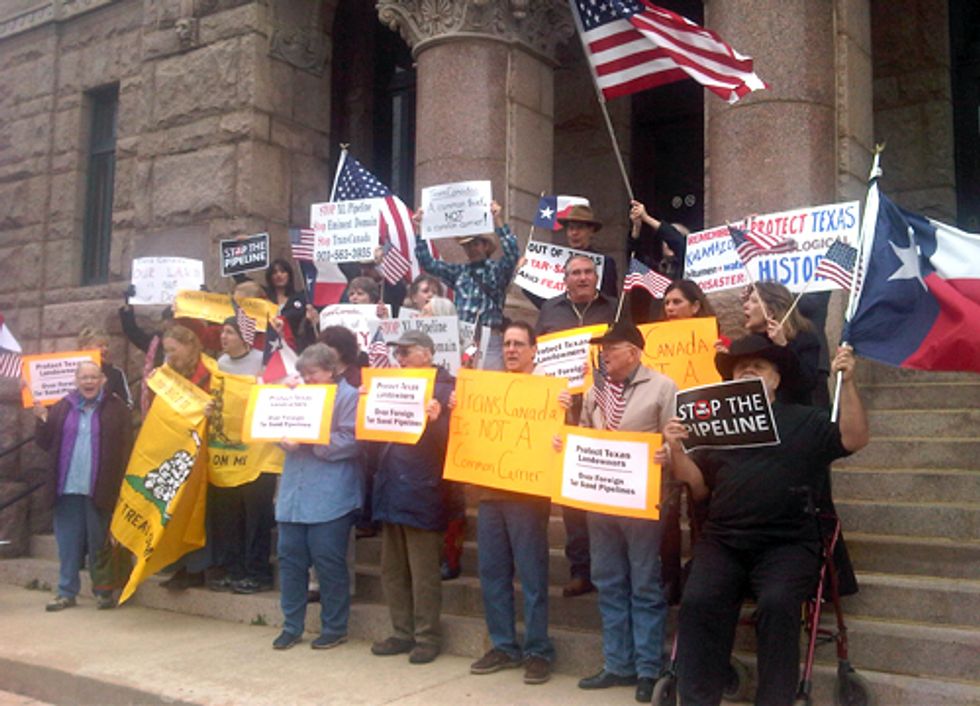 The latest attempts to revive the Keystone XL zombie were announced the afternoon of Feb. 27, and like previous resurrection efforts, this revival attempt will be met with fierce opposition.

“Transcanada's decision to build its pipe from Oklahoma to Texas is a nifty excuse to steal some land by eminent domain. It doesn't increase tar sands mining because there's still no pipe across the Canadian border, but it's the usual ugly power grab and land grab by the fossil fuel industry—we'll do what we can to stand by our allies in that arid and beautiful land," said Bill McKibben, founder of 350.org.

While TransCanada does not require a presidential permit for the southern half of the pipeline, it still must secure land along the proposed route. Since few people are eager for a pipeline carrying corrosive tar sands oil to run through their backyard, the company has resorted to using eminent domain to grab land away from property owners.

“I’m looking out my window every hour,” Julia Trigg Crawford, 53, of Lamar County, Texas told Talking Points Memo. “While they don’t have a permit to build anything, they have the right to start construction…. A foreign for profit pipeline was allowed to condemn my land without my being allowed to talk to a judge.”

Stories like Julia’s have inspired a grassroots rebellion against the company. The fight is creating some unique bedfellows—environmentalists, Tea Partiers, libertarians, ranchers, and more. And just as fights over land rights and local concerns have stalled the Northern Gateway pipeline that would run from the Alberta tar sands to the coast of British Columbia, it looks like TransCanada could be facing months, if not years, of local fights along its proposed route.

As for the northern half of the Keystone XL pipeline, TransCanada is also facing a difficult route to approval.

“Transcanada's second decision, to reapply for a permit to bring tar sands oil across the border, puts us back where we were this time last year,” explained Bill McKibben. “Since their first application was outright rejected, this one will have to start all over again—the White House has made clear for months that it will be 2013 at the earliest before any decision is reached. If this time the process proceeds without influence-buying at the State department, and if the administration honors its promise to fully evaluate climate impacts, that permit will never be granted. Those, of course, are big ifs.”

Which is why we have to keep the pressure up over the coming months. In this case, the best defense against the Keystone XL zombie is going to be a good offense. Instead of spending the next 12 months fighting over a single pipeline, we want to expand our grassroots battle against the fossil fuel industry in a number of important directions. First, we’re going to take up new iconic fights, supporting efforts to stop everything from a fracking to coal export terminals. Second, we’re going to blow the whistle on the dirty money that’s corrupting our political system, turning up the heat on every politician in America, from presidential candidates to members of Congress, and demanding that they side with the people, not the polluters. And third, we’re going to go after the billions in subsidies the fossil fuel industry receives each year. Ending these taxpayer handouts will help stop projects like Keystone XL by leveling the playing field for renewable energies to beat fossil fuels.