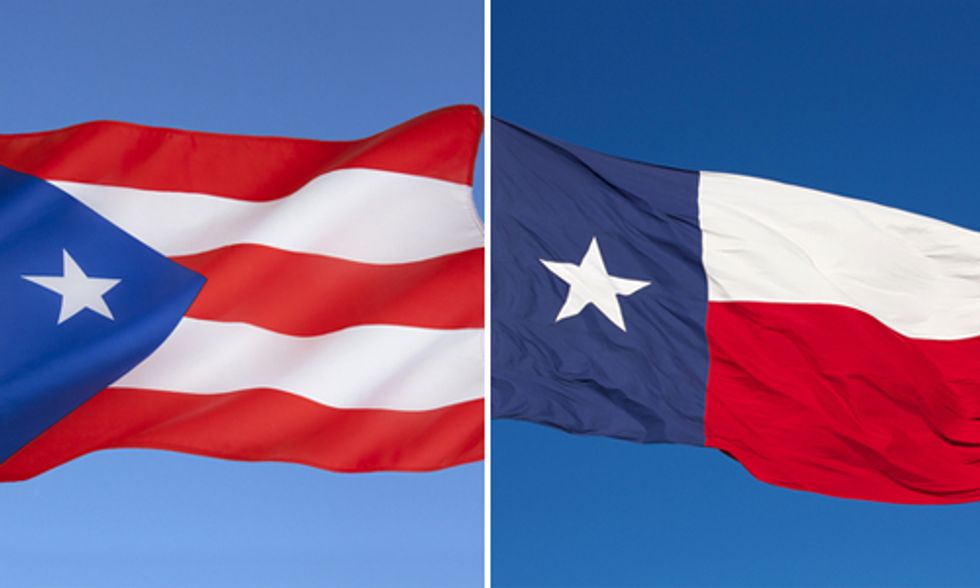 Why not a Commonwealth of Texas? That thought occurred to me reading about political stalemate in Washington while celebrating the 10th Anniversary of the Sierra Club’s vibrant chapter here.

A modern Whiskey Rebellion afflicts America. Calling itself “The Tea Party” these rebels have nothing to do with the Boston merchants who dumped India Company tea into the harbor. New England patriots wanted representation. When they got it, they quite promptly levied and supported higher taxes (mainly tariffs) to encourage commercial growth, provide national defense and finance canals and roads.

The Texas Lone Star flag is almost identical to that of Puerto Rico. Both were stolen by U.S. military occupation. They belong together.

But there was another colonial faction for whom the issue was not “taxation without representation” but taxation, period. When the fledging Administration of George Washington levied—democratically—a tax on whiskey, the Scotch-Irish of the frontier rose in rebellion. Washington suppressed them. The Constitution survived.

That spirit—representation as a means of evading taxation—dominates ‘Tea Party” conservatism. Some on the right don’t want to pay. Many others object to the things taxation buys—good schools and health care for everyone, police instead of vigilante self-defense, public parks in place of private estates—or does—coddling children by keeping smog out of the air, protecting the gullible by banning patent medicines, interfering with the right of workers to labor in dangerous factories.

Today’s Whiskey Rebels, empowered by the Supreme Court’s campaign finance rulings, abuse the Constitution’s checks and balances. They jam the gears blocking even governmental business—pay-off the deficit or build decent bridges—they theoretically favor. The Arizona legislature has passed “nullification statutes” harkening back to before the Civil War, while Texas Governor Rick Perry oscillates between promising to secede and threatening to run for President.

The irony of the Whiskey/Tea Rebellion is that it thrives in states that are, net, “takers” from Washington. They receive more federal benefits (which they claim not to want) than they pay in federal taxes, while “maker” states like Massachusetts, New York and California are overtaxed. The current federal deficit is fed by government spending in (mostly) Tea Party “taker” states (mostly Tea Party learning). South Carolina is the biggest net “taker.” Their Congressional delegations, adherents to Grover Norquist’s “No new taxes” pledge, block the country from dealing with the deficit while meeting vital public needs—even maintaining the interstate highways system is anathema.

Clearly the commitment of Tea Party “taker states” to representation is tepid. They deny it to the District of Columbia and Puerto Rico statehood advocates. At home they expend enormous political ingenuity erecting voting barriers to students, minorities, the elderly or poor.

So let’s give them a choice. Consider Puerto Rico. Residents pay no federal income tax. They enjoy no vote in Congress or for the Presidency. We should allow any “taker state,” (those not paying their fair shares of federal taxes), to opt into Commonwealth status. The accumulated share of the federal debt attributable to services provided to its residents would be transferred from Washington, DC to, say, Austin. (Texas must lead the parade. Only Texas can legitimate Commonwealth Status for other Whiskey Rebellion/Tea Party red hots).

Well, maybe. There are a couple of flies in the Commonwealth ointment. The “taker” state share of the national debt is big—Texas only gets an extra nickel for every dollar of taxes it pays, but Arizona gets $1.40 of services for $1.00 in taxes, and South Carolina chocks in at a decadal average of $3.24 in benefits for every federal tax dollar paid.

Or it might turn out that even Whiskey Rebellion red-hots are grateful for Grand Canyon National Park, the control tower at the Dallas-Forth Worth airport, Mississippi Interstate Highways, Wichita ribs inspected by the Department of Agriculture and South Carolina drugs tested by the FDA. Maintaining some of these services under a Commonwealth, without access to the federal income tax, is as Puerto Ricans have discovered, very challenging.

So perhaps the “taker” states wouldn’t “take” the Commonwealth option. But then at least we would know the truth—they really don’t mind taxes—as long as someone else pays them. Which, since the Whiskey Rebellion was all about fury among frontiersmen at being asked to pay for their own defense, wouldn’t be a first in American history. But we could call out the militia and be done with it. (Remember, this is a satire).