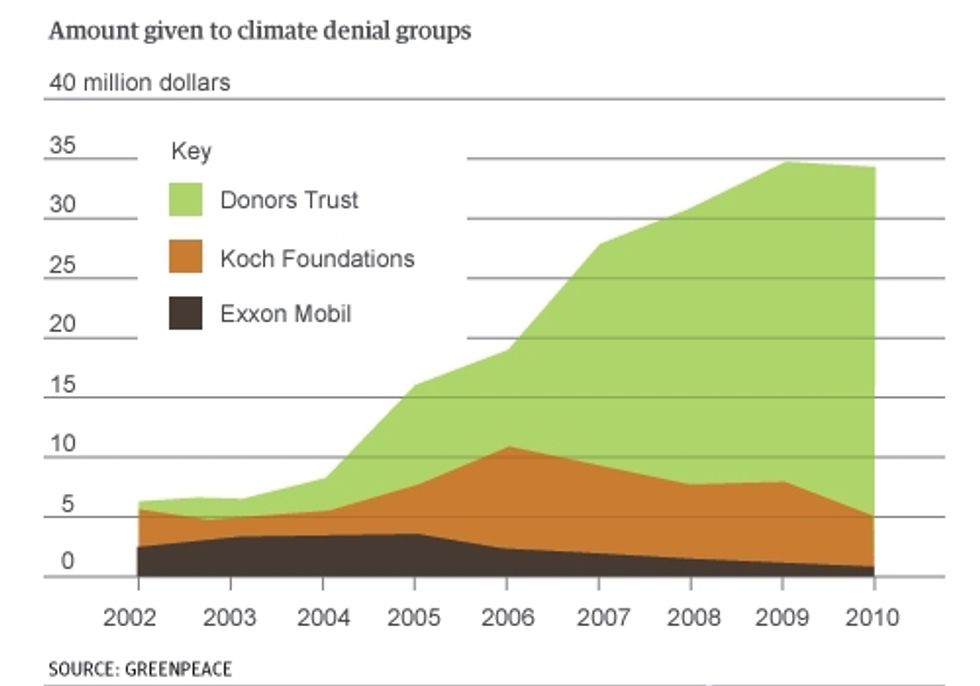 For those familiar with the effort of ExxonMobil and the Koch brothers to bankroll a network of organizations denying basic climate science, a new article in the Guardian offers some revelatory information on the secret funding network that outweighs even top denier sugar daddies like Koch and Exxon.

Donors Trust and Donors Capital Fund, based out of the DC suburb of Alexandria, VA, have sent $118 million to the "climate denial machine" from 2002-2010, according to a Greenpeace analysis featured in the Guardian. The graph above, from the article, illustrates the significance of this money as compared to giants like Koch and Exxon.

Of course, the Koch brothers are part of the Donors Trust network, using the donors groups to hide their own giving to a variety of corporate front groups. Because of the obscurity provided by donors, we don’t know exactly who is getting exactly how much of the Koch payments to Donors Trust and Donors Capital Fund.

An accompanying article by the Guardian shows how the donors groups provide large portions of organisations’ entire budgets, such as the Committee For A Constructive Tomorrow, which even among climate deniers is notably anti-scientific.

The support helped the Committee for a Constructive Tomorrow (Cfact), expand from $600,000 to $3m annual operation. In 2010, Cfact received nearly half of its budget from those anonymous donors, the records show.

The group’s most visible product is the website, Climate Depot, a contrarian news source run by Marc Morano. Climate Depot sees itself as the rapid reaction force of the anti-climate cause. On the morning after Obama’s state of the union address, Morano put out a point by point rebuttal to the section on climate change.

CFACT is among over a dozen organizations that get 30 - 70 percent of their total budgets from the two donors groups. As we reported on PolluterWatch last October using 2010 IRS tax filings:

Koch is clearly embarrassed by the negative publicity. Koch “Facts,” the company’s PR website that lashes back at unfavorable reporting on Koch, attempted to respond to the flood of press on the donors groups without mentioning them by name. Similarly, Donors Trust president Whitney Ball has done her best to keep Donors Trust and Koch from being synonymous. To be clear–they are not, but the Kochs and their operatives are key players in the Donors network, with people like Arthur Brooks of the American Enterprise Institute and Steven Hayward of the Pacific Research Institute helping oversee donors operations, including millions in funding to their own organizations.