A Look Inside Chevron's Groundwater Contamination Spin in Ecuador 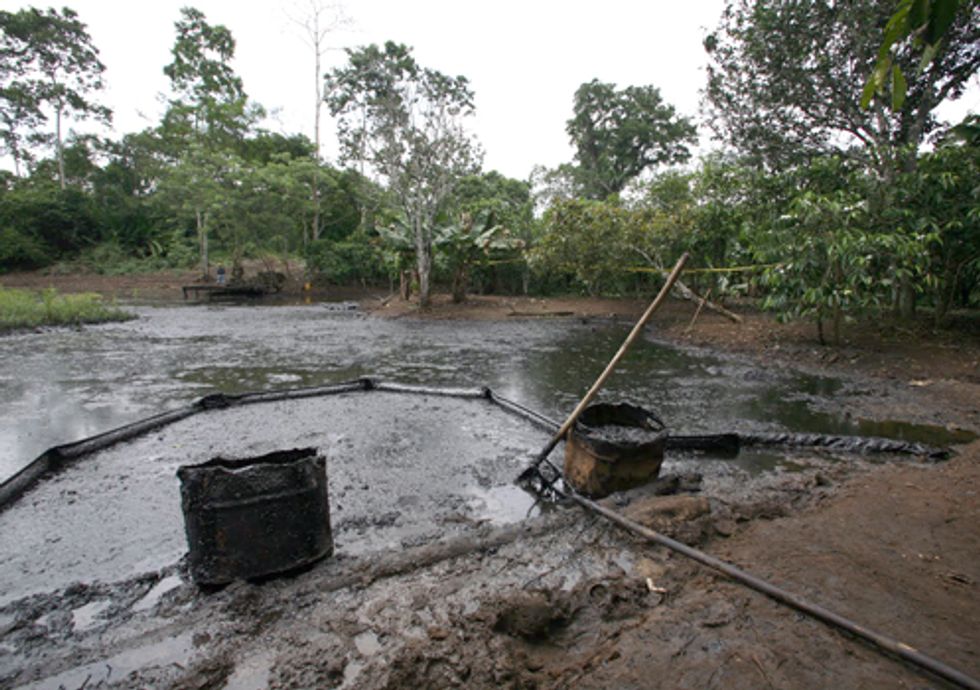 The Ecuador indigenous and farmer communities who recently won an $18 billion judgment against Chevron have long maintained that the oil giant has been taking their comments out of context and lying in its long-running effort to discredit the lawsuit.

This week in a blog on its website, Chevron claimed that that Dr. Ann Maest, a prominent U.S. scientist who worked as an expert for the rainforest communities, testified under oath “that she was not aware of any scientific data indicating that drinking water wells have been impacted in any way by Texpet’s operations” in Ecuador.  (Texpet is a Chevron subsidiary.)

What Maest said during three days of deposition testimony was that there was extensive groundwater contamination at Chevron’s production sites, but that there was no data from the plaintiffs about contamination in drinking water wells because no such wells were tested.

In her deposition, Maest repeatedly cites multiple and widespread instances of groundwater pollution at every single waste pit in Ecuador where such testing took place. Yet Chevron claims in its blog that "even the plaintiffs own scientists" agree with Chevron's fabricated theory that there is no groundwater contamination in Ecuador.

Here are some relevant excerpts from the Maest deposition that Chevron failed to mention in its blog:

“There has been some sampling of groundwater that's down gradient of pits, and they did find quite high concentrations of TPH [Total Petroleum Hydrocarbons] in groundwater.” (see 1/20/11 deposition, page 133)

The plaintiffs found "elevated concentrations of total petroleum hydrocarbons and polycyclic aromatic hydrocarbons...downstream of one of the separation stations in the concession." (see 12/8/10 deposition, page 161)

Samples tested from the plaintiff's and Chevron proved that "there are also PHs [a type of oil hydrocarbon] that are high in soil and groundwater immediately under the…pits that were allegedly remediated." (see 12/8/10 deposition, page 203)

Here is how Maest answered questions from a Chevron lawyer about groundwater contamination in Ecuador at a deposition that took place on Dec. 8, 2010 (see page 212)—an exchange Chevron ignored in its blog posting:

Q.  You had no worry about finding—whether you were going to find it or not?

A. No. We knew at that time that they (the plaintiffs technical team) had found groundwater contamination.

Q. And where was that found?

A. Under pretty much every pit that they looked at.

So much for Chevron’s claim that plaintiff's consultants agree with Chevron that there was no groundwater contamination in Ecuador.

For more on how Chevron lies to shareholders about the Ecuador litigation, see this report from securities lawyer Graham Erion and this letter from Congresswoman Jan Schakowsky (D-IL), asking the Securities and Exchange Commission to investigate the company.