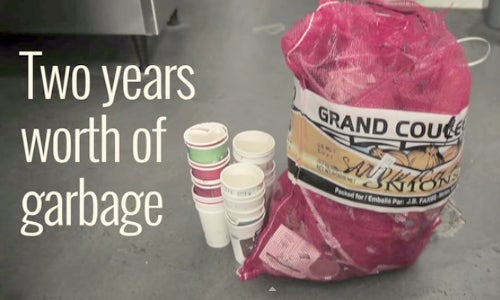 Quick—how much food, paper and plastic have you thrown in the garbage the past two years?

It’s a question you likely can’t answer, but whatever the amount,  it will certainly exceed the output of Justin Vrany and his Chicago café, Sandwich Me In.

Vrany estimates that an average restaurant dumps eight gallons of trash in a dumpster per hour. Sandwich Me In had that amount for an entire two years. That is, until Vrany handed the trash—one bag and a few coffee cups—over to an artist to create a sculpture. If you’re keeping track, that means no trash for two years.

“We have no waste at all,” he said in a YouTube video created by NationSwell. “Any questions that you would ask me, we have a green solution for that. To me, that’s the only way to let other restaurants know that this can work and this can happen.”

The owner says his desire to be sustainable began years ago after he went back to school and learned all about the practice. It reminded him of his youth when his family would have turkey for dinner one night, and turn it into several meals of soup for the remainder of the week. All of this eventually led him to discuss wastefulness with his wife, proclaiming, “We’re not doing this anymore.”

Vrany says the business recycles everything. He usually brings it back home in crates and boxes to ensure that it gets properly recycled. The café also operates on renewable energy and uses only local meats and produce.

Vrany is offering a free composting program through his restaurant this summer.