A Last Look at California's Glaciers 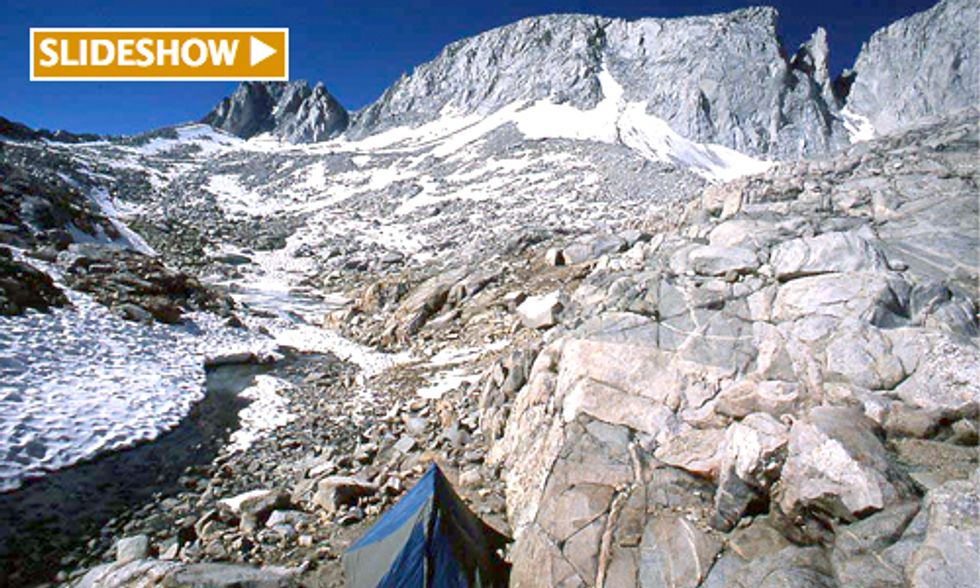 Beyond the world we know, in the shaded recesses of our highest mountains, lies another California. It's a world of rock and ice, of brilliant light, of fearsome snowstorms that over time have formed a stunning collection of magnificent glaciers.

Many people don't realize that glaciers even exist in California. In fact, we have about 130.

Most cling to steep slopes of the Sierra Nevada, but they're disappearing at a rapid rate. Geologist Greg Stock of Yosemite National Park reports that even Lyell Glacier—second-largest in the Sierra—no longer has the mass required for it to creep downhill, which is one condition that defines a glacier.

With a strange but passionate marriage of gusto and sadness, I recently spent a full spring, summer and fall photographing these glaciers. It was one of the most remarkable years of my life. Climbing to mountain heights brought astonishing scenes as the sun edged over the horizon and bathed the ice in morning's golden glow. At campsites I was enchanted by glacier-fed streams that nourished rivers below, including the Tuolumne, later tapped by San Francisco through the Hetch Hetchy system, and the Owens, bound for Los Angeles. The glacial runoff continued long after other waterways had withered in summer's drought.

It was a privilege to see such beauty. It was tragic to know I would not see it again.

Among all the changes wrought by global warming—heat waves, raging floods, rising seas, menacing droughts—the melting of the glaciers is the most immediately visible for anyone who ventures high enough to see them.

One might reason that California's glaciers are already small and of little consequence, but the same forces that are melting them are also reducing the mountains' entire snowpack, which will diminish this century by 30 to 70 percent, according to scientists at Scripps Institution of Oceanography. That snowpack accounts for 60 percent of the water used in California.

How does one respond to such fatal news? New dams are not the answer because we've already built on all the dam sites that made economic and engineering sense, and further ponding of water increases evaporative loss.

Rather, water delivery systems need to be made more efficient to cope with shortages and to leave adequate nourishment in rivers for the greater community of life, including commercial fisheries at sea. Floodplains need to be safeguarded as open space to accommodate higher floods and to recharge groundwater. Certainly we need to reduce the source of the problem—burning fossil fuel—and the state Legislature has taken steps to bring our discharge of global-warming gases down to 1990 levels. But even if those contested efforts succeed, they're not enough. Reductions at the essential scale can hardly be imagined as long as our population is slated to double within a half-century or less. If we can't do the job now, how will we do it then? Our commitment to endless growth needs to be challenged, or the problems stemming from unlimited needs will be unlimited as well.

Take one last, sweet look at these glacial gems of California. It's too late to stop their melting. But perhaps their loss can help inspire us to turn the tide of destructive change and protect the workings of the natural world upon which we all depend.

The climate crisis already has a death toll, and it will get worse if we don't act to reduce emissions.

'Stop the Plunder and Start the Healing,' UN Chief Urges in State of the Planet Speech

Independent Media Institute
Insights + Opinion
The miserable ones: Young broiler chickens at a feeder. The poor treatment of the chickens within its supply chain has made Tyson the target of public campaigns urging the company to make meaningful changes. U.S. Department of Agriculture / Flickr

The actions of the U.S. meat industry throughout the pandemic have brought to light the true corruption and waste that are inherent within our food system. Despite a new wave of rising COVID-19 cases, the U.S. Department of Agriculture recently submitted a proposal to further increase "the maximum slaughter line speed by 25 percent," which was already far too fast and highly dangerous. It has been made evident that the industry will exploit its workers and animals all to boost its profit.