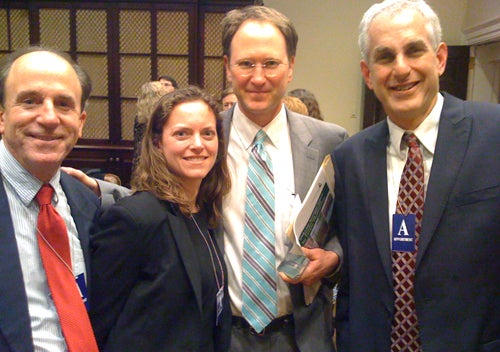 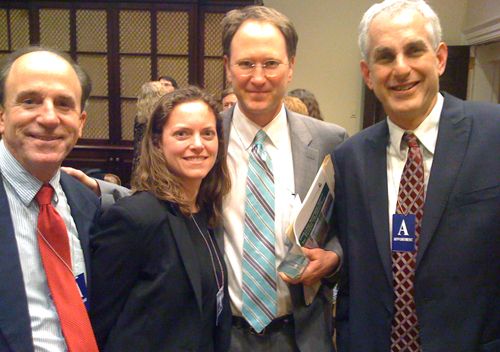 Hundreds of people descended on Capitol Hill this February to meet with Congressional members. The agenda—restore and protect our Great Lakes. Government, business and non-profit leaders joined together to share success stories from the Great Lakes Restoration Initiative (GLRI), including projects to reduce nutrient runoff and clean-up polluted harbors.

During this year’s visit, a small group of people were invited to the White House for a meeting with various federal officials. At this meeting, we learned that the U.S. Army Corps of Engineers (ACE) will be speeding up its study of how to separate the Great Lakes and Mississippi River basins to protect the lakes from the destructive Asian carp.

Another topic discussed at the White House was the nutrient pollution overtaking Lake Erie. As a result of the meeting, the U.S. Environmental Protection Agency and the U.S. Department of Agriculture Natural Resources Conservation Service convened a conference call with a small group of environmental-conservation groups on how to fix the nutrient problem plaguing Lake Erie. We made eight specific requests. (See www.theoec.org/Water.htm).

The pledges and efforts were impressive. But the devil is always in the details. Can the U.S. ACE’s study be completed in 18 months or less? Will the Obama team actually move forward on some of our requests? Will Congress act? We must hold our officials’ feet to the fire and ensure that these efforts not only are carried out, but actually produce meaningful results.

On the state level, State Rep. Lynn Wachtmann (R-Napoleon) pulled the rug out from under Gov. Kasich with the unexpected introduction of House Bill 473, a revised bill to implement the Great Lakes Compact. Wachtmann had sponsored a flawed Compact bill that Kasich vetoed last July.

The Kasich administration had been working with the House to craft a new bill since the Governor vetoed an overly industry-friendly bill approved mostly along party-lines by the General Assembly last summer. The vetoed bill was opposed by former Ohio Governors Bob Taft and George Voinovich, the Governors of Michigan and New York, and environmental-conservation groups.

While the new bill is much improved, Governor Kasich’s staff has signaled publicly that the bill’s introduction was unexpected and that several important issues remain unresolved.

Conservation groups credit Kasich and the Ohio Department of Natural Resources for achieving substantial improvements in the new bill, including, significantly reduced limits on the amount of water an industrial operation may withdraw or use before triggering a permit, strengthening protections for high-quality streams and grounding in science the management of Ohio’s Lake Erie basin water.

However, the bill would repeal the current Ohio law that requires that both Lake Erie and its tributaries be protected from large water uses. Instead, it extends protections only if the entire Lake Erie basin is threatened by a proposed water withdrawal, leaving individual tributaries and groundwater vulnerable to harm. This flies in the face of the Compact and current Ohio law, which require that tributaries be protected from any water withdrawal or use that may cause significant harm.

In an unprecedented move, HB 473 would restrict anglers, boaters and other Lake Erie recreational water users to appeal a water withdrawal or water use decision that may negatively impact their ability to enjoy Ohio’s rivers and streams. It would allow only water users that can prove injury to a direct economic or property interest to appeal a permit decision. This is an outright abandonment of Ohio’s public trust responsibility and a radical move toward privatizing Ohio’s water and natural resources.

HB 473 measures water withdrawals and consumptive uses based on an average over a 90-day period as opposed to a “per day” measure. This opens the door for extractive activities, including oil and gas fracking operations, to withdraw and/or consume quantities of water in excess of permit thresholds without having to obtain a permit.  For example, a facility could withdraw 6 million gallons of water in a single day and not consume any more water over the remainder of the 90-day period and not trigger the bill’s proposed gallons-per day threshold for needing to seek a permit.

As the legislation currently is written, water users seeking an experimental permit do not have to meet all the provisions of the decision-making standard within the Compact, particularly the “no significant impact” provision. This provision is required, however, if a permittee wanted to pursue using the technology under the new or increased water withdrawal and consumptive use regulatory program. In addition, the legislation does not outline how many times a water user could apply for this type of permit.

This new legislation allows water users to start building their capacity to withdraw or consume water before being granted a permit, if they are not seeking to pull from a high-quality stream, a first time occurrence in environmental policies. While an applicant would not be allowed to withdraw or consume water without a permit from state regulators, the bill gives industry an economic windfall argument when balancing economic and societal needs against environmental protections.

Lake Erie is a precious resource that is vital to people, wildlife and jobs. Lake Erie supplies drinking water to 11 million people. Tourism and travel in the Lake Erie basin generates $10 billion annually to the Ohio economy and supplies $1.4 billion in federal, state and local taxes.

TAKE ACTION: Contact your state representative and senator today at 800-282-0253 or www.legislature.state.oh.us. and ask them to not roll back protections for tributaries, allow recreational users to appeal a water withdrawal permit, close all loopholes and require water thresholds for a permit be based on a per day basis.