A Fierce Green Fire: The Battle for a Living Planet Premiers Earth Day on PBS 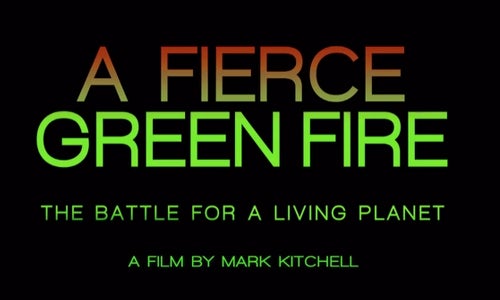 Mark Kitchell’s 1990 Oscar nominated documentary, Berkeley in the Sixties, covered the campus activism that disrupted the House Un-American Activities Committee’s hearings, launched the Free Speech Movement, fought the police at People’s Park and inspired student spokesman Mario Savio to declare: “There comes a time when the operation of the machine becomes so odious, makes you so sick at heart, that you can’t take part … You’ve got to put your bodies upon the gears and upon the wheels, upon all the apparatus, and you’ve got to make it stop.”

Now Kitchell is back with another stand up and cheer nonfiction film about a different movement: environmentalism and its eco-warriors who, as Savio put it, “indicate to the people who run it, the people who own it, that unless you’re free, the machine will be prevented from working at all.”

Like a classical Greek drama, Kitchell’s well-crafted and briskly paced A Fierce Green Fire has a five-act structure, as each segment focuses on different aspects and leaders of the environmental movement over the past half a century, with narration by a prominent artist or activist. The title is derived from a section in environmental philosopher Aldo Leopold’s A Sand County Almanac in which he describes his ecological awakening after shooting a wolf while working as a U.S. Forest Service Ranger: “We reached the old wolf in time to watch a fierce green fire dying in her eyes.”

The documentary—which will air Tuesday, Earth Day, on PBS stations nationwide—opens with a stirring montage of idyllic nature, followed by ecosystem despoliation and devastation, such as mountaintop removal coal mining in West Virginia. Scenes of global activism appear, including NASA scientist Jim Hansen getting busted at the White House for protesting the Keystone XL tar sands pipeline and of Nobel Peace Prize winner Wangari Maathai declaring: “We will shed blood for land!” This riveting, rapidly cut sequence is set to the pulsating beat of the Chamber Brothers’ “Time Has Come Today.”

Oscar-winning actor and activist Robert Redford—who is also a Natural Resources Defense Council trustee and honorary board member of the Mikhail Gorbachev-founded Green Cross—narrates Act 1. This first section is all about the founding roots of what used to be called the conservation movement. It concentrates on the Sierra Club’s struggles to conserve land, beginning with founder John Muir’s 1913 opposition to damming Yosemite National Park’s Hetch Hetchy valley. Then it fast-forwards to the 1960s, when the Sierra Club and its first executive director, Berkeley-born David Brower, spearheaded another crusade to prevent the U.S. Bureau of Reclamation from building dams in the Grand Canyon.

Full-page Washington Post and New York Times ads plaintively asked: “Should we also flood the Sistine Chapel so tourists can get nearer to the ceiling?” Decades before the current Internal Revenue Service (IRS) flap, the feds retaliated by suspending the Sierra Club’s non-profit status—a move that backfired when membership exploded. The dams were defeated.

As Redford notes, “The sixties brought the flowering of conservation.” Other period highlights, such as the burning of the polluted Cuyahoga River in Cleveland and the first photos of planet Earth from outer space, are noted. Cue Joni Mitchell’s “Big Yellow Taxi”: “Don’t it always seem to go/That you don’t know what you’ve got till it’s gone?/ They paved paradise put up a parking lot.” 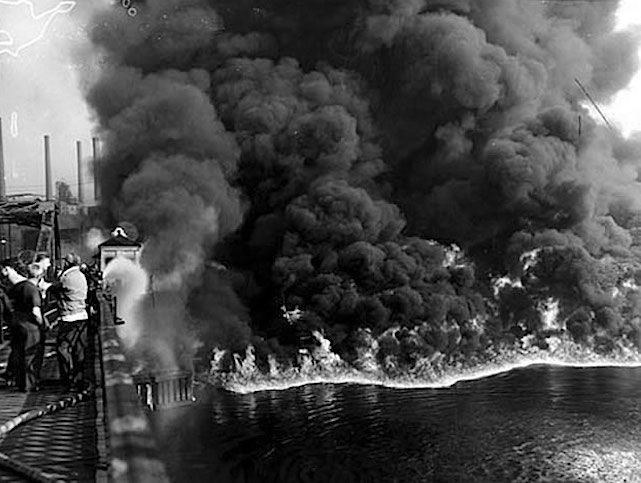 The burning of the Cuyahoga River in Cleveland, OH. Photo credit:

Masses of people are seen rising up to keep what they’ve got. Twenty million people participated in the first Earth Day—April 22, 1970—the largest one-day demonstration in human history. We see Senator Gaylord Nelson, who first conceived of Earth Day, the poet Alan Ginsburg and black organizer James Farmer, who denounces an “equality of extinction.”

In Act 2, narrated by actress Ashley Judd, an unlikely hero of sorts emerges: President Richard Nixon, who, as he seeks to respond to the rising tide of activism and awareness, establishes the U.S. Environmental Protection Agency (EPA). Although Tricky Dick opposes the Clean Water Act his veto is overridden, and other environmental measures, such as the Endangered Species Act, become law.

A decade after Rachel Carson’s cautionary Silent Spring the EPA bans DDT in 1972. This section shines a light on the late seventies’ outrage over Love Canal, the Upstate New York community which Hooker Chemical Company used as a toxic dump, causing widespread sickness among children and birth defects. Fiery housewife Lois Gibbs leads the opposition to the powers that be, and the struggle culminates in another eco-victory when Gibbs meets with President Jimmy Carter and Congress passes Superfund legislation for hazardous waste site cleanups. But a rollback occurs with the election to the White House of reactionary Ronald Reagan, who as California’s governor had called the cops out on those Berkeley students and as president denounced “environmental extremism.”

Van Jones—who for a few months in 2009 was the Obama Administration’s Special Advisor for Green Jobs before red-baiting forced him out and now co-hosts CNN’s Crossfire—narrates Act 3. With its focus on the early days of Greenpeace, this is probably A Fierce Green Fire’s fiercest, most action-packed segment. Paul Watson, Rex Weyler, Bob Hunter and other eco-warriors wage war on whalers and those slaughtering seals in the Arctic. Espousing a militant philosophy with confrontational tactics, Watson boldly declares: “I work for whales and turtles, not people.”

Since saving Earth is truly a planetary undertaking, Act 4 goes beyond the U.S. in an episode entitled “Going Global” narrated by novelist Isabel Allende. Much of the story centers on the fight to protect the Brazilian Amazon. The hero is union organizer and rubber tree tapper Chico Mendes, who opposed deforestation, logging, road paving and supported forest preserves and Indigenous rights until he was murdered in 1988. Allende closes her segment by introducing the next one, referring to Act 5 as “the mother of all environmental issues.”

That, of course, means climate change. The documentary’s grand finale is narrated by none other than Meryl Streep as she examines the science and politics of global warming. We see NASA physicist James Hansen testifying before Congress way back in 1988 and warning that “the greenhouse effect has been detected.” Indian anti-globalization author and 1993 Right Livelihood Award winner Dr. Vandana Shiva speaks briefly, and The End of Nature author Bill McKibben denounces Washington’s inaction. The co-founder of 350.org is a pioneer in the struggle against climate change and visceral opponent of the Keystone XL tar sands pipeline who participated in civil disobedience against it, for which he was jailed in Washington. 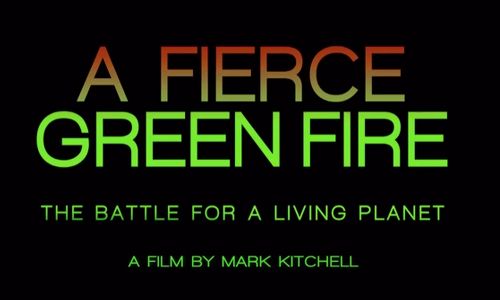 Although one can’t cover everything in an hour-long documentary that spans 50 years, the film is hamstrung by some serious omissions. For example, three of environmentalism’s current bêtes noir—the Keystone XL tar sands pipeline, fracking and nuclear power—are little mentioned, if at all, in A Fierce Green Fire.

To pay tribute to Earth Day, A Fierce Green Fire is scheduled to air nationwide at 9 p.m. on April 22 on PBS stations (check local listings).

Asked about these omissions director/producer/writer Mark Kitchell responded via email: “We made the film before Keystone began—and we tried to work it into the film as we edited. But it kept getting pushed to the ending and the ending became that mosaic of protest all over the world. That’s where a bunch of more contemporary activism ended up,” including the “Keystone XL protest when they surround the White House.”

Some activists might consider the film’s scant or absent coverage of current issues to be shortcomings, if not major oversights. But aside from these lapses, A Fierce Green Fire offers a rousing overview of the movement that just might, literally, save the world.

Kitchell’s documentary is part of the American Masters biography series, which is a production of THIRTEEN (its parent company, WNET, is New York’s PBS member TV station). The distinguished American Masters series—which has won 26 Emmys, 12 Peabodys, three Grammys plus an Oscar—generally celebrates and profiles institutions and individuals who have made outstanding contributions to America’s arts and culture. Past subjects include Arthur Miller, Ella Fitzgerald, Albert Einstein, the Joffrey Ballet, Walter Cronkite, Martha Graham, the Actor’s Studio, John Lennon and John James Audubon. It is certainly a high honor, and completely appropriate, for the environmental movement and its leading champions to be among such esteemed and exalted company.