A Closer Look at Obama's 'All of the Above' Energy Policy 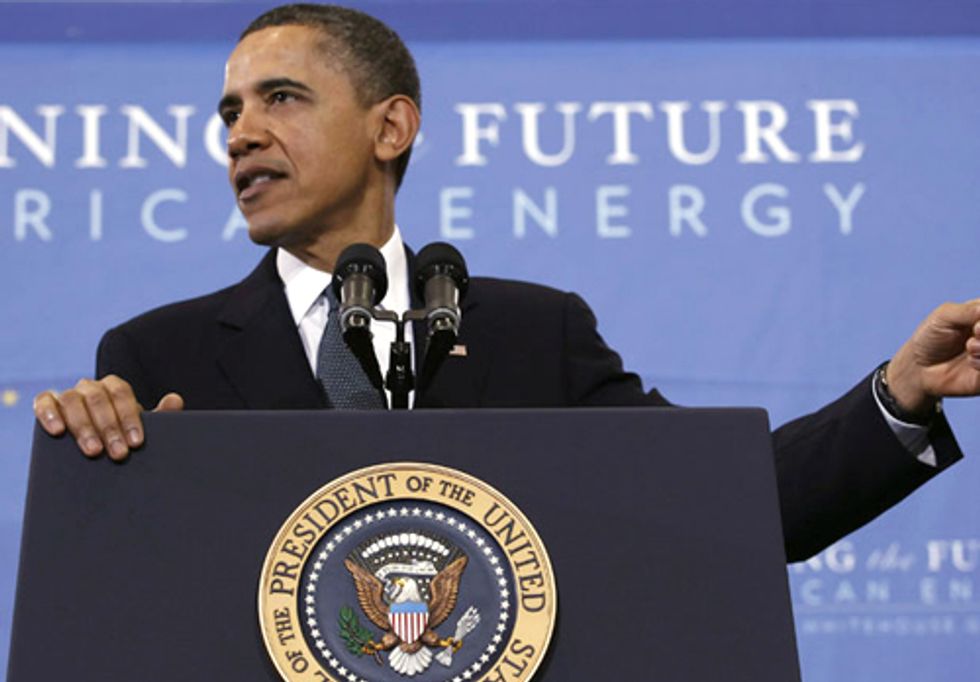 A year ago, President Obama set forth his vision of America’s energy policy. “We need an energy strategy for the future," he said in a message still prominently displayed on the White House website, "an all-of-the-above strategy for the 21st century that develops every source of American-made energy.”

During the presidential debates, he hammered repeatedly an "all of the above" theme, though he also surprised many by making a strong statement about the urgency of confronting climate change during his second term.

This week, President Obama once more talked about his "all the above" strategy as he announced that he was setting aside $2 billion for research and development on alternative transportation fuels.

Things are looking up for renewable energy, right? Not so fast.

Obama's choice for new directors of the three agencies with the most relevance to climate change—the U.S. Environmental Protection Agency (EPA), Department of Energy and Department of the Interior—do not sew confidence that real change is coming.

Obama selected Ernest Moniz as his choice to run the Department of Energy. An MIT professor and a proponent of fracking, Moniz recently led a controversial study that supported exporting liquefied natural gas and has taken a stance in favor of so-called “clean coal.” His long-standing support for nuclear power was unwavering even in the face of the Fukushima disaster.

The U.S. EPA will be headed by Gina McCarthy, currently the assistant administrator of the EPA's Office of Air and Radiation, where she crafted the EPA’s first air pollution rules for fracking and oversaw the development of as-yet-unfinalized standards that would essentially end new construction of coal-fired facilities without carbon capture or other techniques. She has drawn support from both environmentalists and industry alike.

And the person who will oversee the use of public lands is Sally Jewell, a former Mobil Oil engineer and now President and Chief Executive Officer of Recreational Equipment, Inc. (REI). Obama announced her appointment as secretary of Interior, where she will make crucial decisions about leasing federal land for oil and gas fracking or for renewable energy development. Though Jewell has a reputation as a conservationist, she has disclosed owning stock in numerous oil and gas companies, including Anadarko Petroleum Corp., Apache Corp., Chevron Corp., ConocoPhillips and Exxon Mobil Corp, along with Schlumberger and Halliburton.

All of these nominees are known for their active support of an “all of the above” approach on energy.

“I do believe that for this decade, in my context of moving toward lower carbon, natural gas will be a major bridge but it is only a bridge to what I believe will be a required deployment of zero carbon options and we have to see what nuclear’s role is in there,” Moniz told a Senate committee in 2011.

All three of these appointees will help determine whether to build the Keystone XL pipeline or promote shale oil and gas production on federal lands. They will also make major decisions that will affect our energy infrastructure for decades.

But a major fallacy lies behind the "all of the above" energy trope President Obama and his nominees have espoused. As an overarching philosophy it sounds appealing and the rhetoric of inclusiveness is beguiling. But as an energy policy, it does not work because fossil fuels have historically had a huge leg up on renewables in terms of subsidies and federal loopholes and advances in technology have only recently made renewables cost competitive with cheap oil, gas and coal.

Wind and solar are at an even deeper disadvantage because the shale gas boom has flooded the market with cheap natural gas—at least over the short run—enticing consumers and utility companies alike. When natural gas supplies are on offer at a fraction of what it costs buy wind or solar energy, what choice do budget-conscious buyers have?

The fallacy of an "all of the above" theme is akin to that behind the "bridge fuel" meme that the drilling industry aggressively promoted as recently as a year ago.

This idea has been thoroughly debunked by now. The world is warming far too quickly for such a bridge to be built in time. If climate change is going to be reversed or halted, a transition away from fossil fuels has to occur sooner.

Furthermore, the process of extracting natural gas at the wellhead emits enough unburned methane, which has climate changing impacts that can be 30 to 100 times more destructive than those from carbon dioxide, to negate any benefits of lower carbon dioxide emissions at power plants.

Much as the idea of a “bridge fuel” is a mirage—so too is the concept of an "all of the above" approach. It serves as a tool to keep alternate fuels on a distant horizon and distract from the urgent need to shift our energy infrastructure now.

But there is a larger political lesson to be learned here about President Obama and his political calculus when it comes to the environment. It is a lesson that was recently summed up best by energy analyst, Jigar Shah, who made the point that since day one in office, the ever-studious and contemplative Obama has opted on energy for "invention over deployment" and "R&D over job creation and carbon reduction."

What Shah meant is that rather than reckoning with the fact that time is running out regarding climate change and forging ahead with a clear plan to lessen the amount of fossil fuels we use and sharply increase the use of wind and solar and other renewable technology we already have in hand, the president is opting to take the opposite approach: accelerate drilling and further study into renewables.

One quick side note on the ticking clock urgency that is upon us. One need not look far to see that even some of the most conservative commentators around get it. Just read, for example, what Thomas Friedman, by no-means a wild-eyed treehugger, has said recently. In perhaps his most clear-eyed piece on it, Friedman makes this basic point:

"Let’s look at the huge carbon and financial deficits we’re amassing. For thousands of years up to the dawn of the industrial age 200 years ago, the Earth’s atmosphere contained 280 parts per million of the heat-trapping greenhouse gas carbon dioxide. Today, that number is nearly 400 p.p.m., with 450 p.p.m. routinely cited as the tipping point where we create the conditions for out-of-control acceleration."

But President Obama does not seem to recognize this urgency and all signs thus far into his second term seem to indicate that he plans to continue down the path he set during his first term.

Consider his announcement last week: $2 billion for more research on clean transportation. That sounds like a lot of money, especially during a recession. It's actually not. Remember that the stimulus plan set aside over $30 billion for this sort of research and most of it is spent, yet the economy is not a whole lot closer to shifting toward renewables. Meanwhile, most experts agree that we already have the technological capacity to start making the transition to cleaner fuels.

The real reason that Obama is reluctant to direct the weight of the federal government toward the deployment rather than the study of renewables has to do with politics. He got clobbered by the Solyndra scandal. That was the debacle where a solar energy company collapsed, leaving taxpayers on the hook for $535 million.

Even though billions upon billions of taxpayer dollars have been wasted over the years through subsidies to oil and gas companies, Obama has allowed the Republicans to hammer him with the Solyndra club every time he even glances at the wind or solar industries.

His recent nominees, often described as pragmatic or realistic regulators, seem unlikely to push back and take the type of assertive stance against oil and gas development that is called for.

This is especially true of Moniz, who is currently director of the MIT Energy Initiative, which, since 2006, has received more than $125 million in pledges from the oil and gas industry, according to the Public Accountability Initiative. Moniz also has served on the board of directors of ICF Consulting, which came under fire after it was found that the firm, which has oil and gas industry clients, supplied key analysis for the State Department’s controversial assessment of the Keystone XL project.

"We're concerned that, as energy secretary, Ernest Moniz may take a politically expedient view of harmful fracking and divert resources from solar, geothermal and other renewable energy sources vital to avoiding climate disaster," said Bill Snape of the Center for Biological Diversity in a statement. "We're also concerned that Moniz would be in a position to delay research into the dangers fracking poses to our air, water and climate."

This comes at a time when technological advances have made the idea of relying exclusively on wind and solar more and more practical.

A study announced last week, and soon to be published in the journal Energy Policy, assessed New York state’s energy needs and mapped out a potential program to run the entire state on wind, sun, geothermal energy and water, eliminating dependence on coal, oil, natural gas, and nuclear power within 17 years.

"We must be ambitious if we want to promote energy independence and curb global warming," said study co-author Robert Howarth, a Cornell University professor of ecology and environmental biology. "The economics of this plan make sense," added Anthony Ingraffea, a Cornell engineering professor and a co-author of the study. "Now it is up to the political sphere.