A Better World Lies Beyond Coal, Oil and Gas 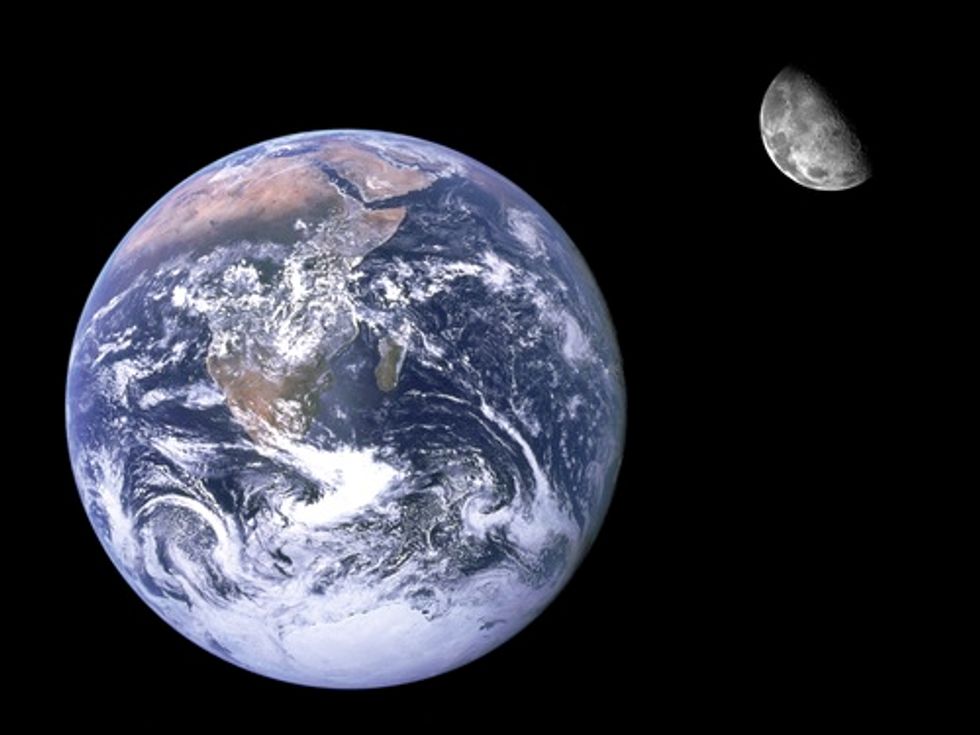 Few of us will ever venture past the 60-mile boundary that separates Earth and outer space. If you do, though, you're likely to experience something known as "the overview effect"—a cognitive shift in how you perceive our planet. Political boundaries disappear, and our atmosphere, which seemed like a boundless expanse of blue from the ground, is suddenly revealed to be a paper-thin shield between life and the dark void of space.

Last week, the fragility of that thin blue shield was underscored by the news that we've reached a daily average of 400 parts per million (ppm) of carbon dioxide in our atmosphere. That's the highest level in at least 3 million years. In less than two centuries, we've increased atmospheric carbon dioxide (CO2) by 42 percent—by burning fossil fuels, degrading our forests and disturbing our soils. And it's still going up.

Although the notion of sending Congress, the President and every other decision maker into outer space has some appeal, it's not exactly the most practical thing. Yet the climate crisis demands the same kind of cognitive shift experienced by astronauts: we cannot let that CO2 ppm number keep ticking up, and the best way to stop it is to stop burning fossil fuels and replace them with renewable energy as fast as we can.

Unfortunately, although President Obama has spoken eloquently about the climate crisis, the energy policies of his administration too often say "business as usual," not "cognitive shift." Here are just three examples:

First, on the same day that the 400 ppm milestone was reported, the administration released its National Strategy for the Arctic Region. Ironically, although the report correctly notes that the Arctic will be severely affected by climate disruption, it also includes talking points that could have come straight out of the Bush administration, including this sentence:

Continuing to responsibly develop Arctic oil and gas resources aligns with the United States "all of the above" approach to developing new domestic energy sources, including renewables, expanding oil and gas production and increasing efficiency and conservation efforts to reduce our reliance on imported oil and strengthen our nation's energy security.

Wrong. Although the parenthetical nod to renewables is nice, any "all of the above" policy that furthers our dependence on oil and gas doesn't strengthen our energy security. Instead, it increases our climate insecurity. As Shell Oil learned the hard way, there are many good reasons why it's a bad idea to attempt offshore drilling in the Arctic. We only need this one, though: If we are serious about addressing the climate crisis, then oil under the Arctic Ocean needs to stay there.

Second, on May 16, the Bureau of Land Management released new proposed regulations for fracking natural gas on public lands. The new rules are disappointing for many reasons: drillers won't be required to disclose what chemicals they're using, there is no requirement for baseline water testing and there are no setback requirements to govern how close to homes and schools drilling can happen.

Once again, though, the policy documents an even bigger failure to grasp a fundamental principle: if we're serious about the climate crisis, then the last thing we should be doing is opening up still more federal land to drilling and fracking for fossil fuels.

Lastly, of course, there is the issue of tar sands crude and the Keystone XL pipeline. I've written many times about the risks of both, but the bottom line is that allowing tar sands extraction to expand will undermine the progress that has been made to reduce carbon pollution elsewhere in the economy.

The good news: we still have time to act. Through clean energy technology, smart policies and responsible leadership, we can spare future generations the "worst-case scenario" for climate disruption. To make that happen, though, the biggest change has to occur on the inside first—a cognitive shift away from the fossil fuel world we've known our entire lives.

We can't literally escape gravity to stare in awe at our amazingly beautiful planet and suddenly comprehend what's at stake—but we can make the journey in our hearts and minds. Once we do—whether we're sitting behind a desk in the Oval Office or on a back porch swing in Salinas, KS—we can see the better world that lies beyond coal, oil and gas.